Check out the Stop Skeletons link below
http://stopskeletons.tumblr.com/
Posted by Old School Lane at 10:44 AM 1 comment:

The year was 2009. Up, Avatar, The Blind Side, and Cloudy with a Chance of Meatballs debuted in theaters. Castle, Glee, The Middle, and Archer featured on TV. While Nickelodeon Movies has made sub par movies, they've always been somewhat successful at the box office. The next movie that would be made was Hotel for Dogs. Based on the 1971 book of the same name, Hotel for Dogs, it's about a young girl named Liz who finds a stray dog and her puppies, which she names Sadie, and hides it in an abandoned house since her great-aunt is allergic to animals and her mother refuses to let her keep them. The movie was the second to be produced by Dreamworks Pictures after A Series of Unfortunate Events, but the first to not be produced by Paramount. When I first saw the trailer, I immediately discarded as a stupid kids' movie and never saw it in the theaters.


Then I learned that the script was written by Bob Schooley and Mark McCorkle, who are mostly known for creating shows or written scripts for Disney movies such as Kim Possible, Buzz Lightyear of Star Command, Return of Jafar, Aladdin and the King of Thieves, Sky High, and The Lion King II: Simba's Pride. When learning about this, I became slightly interested in checking it out since I like their work. I like to call them the Disney equivalent of Will McRobb and Chris Viscardi working together with various projects. Is the movie like a cuddly puppy or a turd in the lawn? Let's find out in Hotel for Dogs. The movie starts with two kids named Andi (played by Emma Roberts) and Bruce (played by Jake T. Austin), two orphan siblings who decide to scam a pawn shop by putting a rock inside a sealed cell phone box to sell for cash. They eventually got caught by the police and were released thanks to their social worker Bernie (played by Don Cheadle) who took them home to their foster parents Carl and Lois (played by Kevin Dillon and Lisa Kudrow respectively). Carl and Lois are uncaring foster parents who concentrate on their failing rock career and less on the kids. While Bernie knew of Carl and Lois' inept nature, he tells Andi and Bruce that if they didn't straighten up their act, they would be separated and put into different homes. When Bernie leaves them at their room, their dog Friday appears at the fire escape after hiding in site from Carl and Lois. Apparently, Carl and Lois doesn't know about Friday and the kids have kept him a secret fearing that they would be told to sent the dog to the pound. Andi tells Bruce that they have to stick together and not cause any more problems or else they would be placed in different families separately.

The next day, Friday wandered outside while Andi and Bruce were sleeping to look for food. However, he was caught by Animal Control. Andi and Bruce realize that Friday was missing due to not being back sooner from being out and decide to look for him. They first go into the pet shop to see if he was brought there. Andi meets up with the pet shop employee Dave (played by Johnny Simmons) and asks him if he's seen Friday. Dave said no, but he's begins slightly stuttering while talking to her. The other worker Heather (played by Kyla Pratt) interrupting the conversation suggesting to check the dog pound. When reaching the dog pound, they found him being put in a cage by a dog catcher and tried to release him. At first, the front desk guy acted rude with them and said that if they would get their parents to come to the dog pound to sign papers, they'll let Friday go. Andi decides to pay the front desk guy and they released Friday. Andi tells Bruce that they had to find Friday a good home or it'll cause them more trouble while walking home. They see a group of thieves running from an large abandoned hotel. The police sees Andi and Bruce and chased them thinking they were the thieves. They ran and hid at the abandoned hotel while the police continued to search for them. While they hid, they saw a shadow and hear noises coming from the hotel. It turned out to coming from a small Boston Terrier and a English Mastiff. Friday ran towards them with Andi and Bruce trying to catch up to them. They then saw how happy Friday was with the other dogs, so they decided to let Friday stay the night until they could think of a plan.

The next morning, one of the dogs began to howl loudly due to the window shade closed and Andi and Bruce kept them quiet so that no one could go into the hotel. With that, Andi decides to buy dog food for them while Bruce keeps them company. While Andi buys the food, she meets up with Dave again and they did some small talk on dogs. Andi lies to him saying that her family has a large house with numerous dogs that they adopt and raise and Dave brings her into the back of the shop and begs her to adopt three more dogs. She hesitates at first, but she accepts them. Andi and Dave drive back to the hotel where Bruce is inventing a fetch machine for the Boston Terrier he named Georgia. Dave thinks it's a cool idea, but that it needs some work. They then hear Heather coming inside with more dog food saying that she wants to help out.  As time went on, another kid named Mark (played by Troy Gentile) has been knowing what Andi, Bruce, Dave, and Heather has been doing at the hotel and offers to assist them. Together, they decide to raise the dogs, pick up more strays, invent new ways to take care of them, and renovate the abandoned hotel. 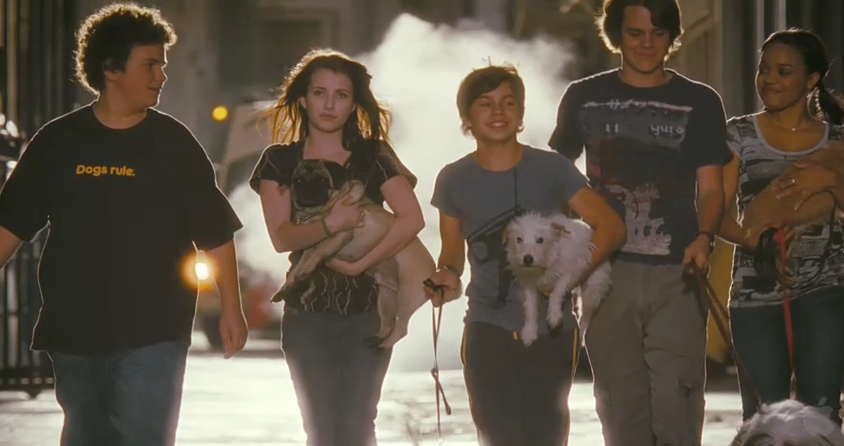 Bernie visits Andi and Bruce and tells them that there's a couple who live in another city who is willing to adopt them. However, due to not wanting to abandon the dogs, the hotel, or their friends, they refuse the offer. One day while taking care of the dogs, Dave asks Andi out on a date to a party, Mark tries to mingle with Heather, and Bruce is interrogated by Lois and Carl after stealing the hairdryer without consent. Bruce runs away towards the hotel and they call the police while Andi is meeting up with an old friend and accidentally reveals to Dave that she's an orphan. Andi runs off back to the hotel while the cops suddenly surround the place. They're both arrested and sent to jail while the dogs are captured. Bernie tries to convince Lois and Carl to take them back, but they reject the idea. With no other choice, Bernie separated Andi and Bruce and they both get taken in by different foster parents. While they were taking away, Bernie notices that all but one dog was taking. Bernie then realizes what the kids were doing at the hotel and why they wanted to stay as oppose to going to another more loving foster family.

Eventually Friday escapes from his pen and rushes towards Dave, Heather, and Mark, who then eventually find Andi and Bruce. They then release all the dogs from the pound and bring them towards the hotel while they were being chased by the dog catchers and cops. When they reach inside, Bernie and a large crowd of people greet them introducing each dog by name and trait saying that they deserve to be adopted and not locked up. The crowd cheers and the dog catchers give up their chase. Bernie states to Andi and Bruce on how proud he is of them and their hard work. He then tells them that he and his wife wants to adopt them into their family. The movie concludes with the hotel officially open for dogs and Andi and Bruce happy with their new lives. 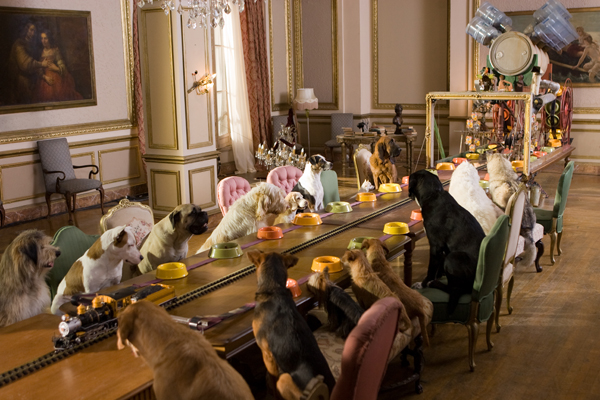 The movie had a decent run at the box office and received mixed reviews from the critics and viewers. Overall, it's a cute movie with dull, uninteresting characters, a simple, predictable, and contrived story line, and a forgettable experience that can entertain little kids and not the adults who watch alongside them. First, the characters. While each of them acted competent, they were either stereotypical, acted like jerky assholes for no reason, or absolutely pointless. There was nothing interesting about the main characters since they have little to no development, Lois, Carl, and the dog catchers acted mean for the sake of just being the bad guys, and Dave, Heather, and Mark were unnecessary except for the plot calling for them to show up. Seriously, you could've cut them from the movie and little to nothing would have changed. Hell, even the love plot between Andi and Dave wasn't needed at all. The plot, while very basic, had a lot of unanswered questions that needed to be explained. How did Andi and Bruce's parents die? Why couldn't Andi and Bruce keep Friday at Lois and Carl's place? How did Bruce learn to invent? How is it that an abandoned hotel still has running water and electricity? How come the water or electric company didn't suspect the large amount that was being used at the hotel? Why they didn't investigate sooner? It just felt way too convenient. I was just completely bored watching the movie knowing the plot twists and situations coming a mile away as well as disappointed knowing that Mark McCorkle and Bob Schooley had done better work, especially Kim Possible.

It seemed like Hotel for Dogs was Nickelodeon Movies' answer to Marley and Me since it came out three weeks afterwards. I recommend seeing the latter since it's more funnier with better characters, a better plot, and a bittersweet ending. As for Hotel for Dogs, unless you're very young or love dog movies, this one I would recommend skipping.

That's all for now. Tune in next time as we take a look at the first adaptation of a Dreamworks movie into TV with Penguins of Madagascar.

Posted by Old School Lane at 1:52 PM No comments:

Posted by Old School Lane at 8:09 AM No comments: