The last Nicktoon to debut in 2005 is another one that also didn't last very long. Just like Catscratch, it only lasted for 20 episodes and has been hugely forgotten by many people. The cartoon is none other than The X's, which debuted on November 25, 2005.

The show is about a family of spies consisting of a man named Mr. X, his wife Mrs. X, their older teenage daughter Tuesday X, and their younger son Truman X trying to live normal lives. However, an evil organization named S.N.A.F.U. (Society of Nefarious and Felonious Undertakings) led by Glowface try to take down the X's so they can, you guess it, take over the world.

Each episode had the X's coping with life without being spies. But for some reason or another, Glowface always interrupts them. Together, the X's use their gadgets and fighting to take down the villains from S.N.A.F.U. They also meet another spy family simply known as the Y's or the Y's Guys, who wants to take down the X's so that they can be the major spy family to take down S.N.A.F.U. While the X's are completey different from one another, they're still a family.

Just like Catscratch, The X's is one of the shortest lasting Nicktoons having only 20 episodes. It was cancelled on December 13, 2006. Also just like Catscratch, it's hugely forgotten by many people and has faded into obscurity. In fact, shortly after the show ended, Nick.com removed the show's content and videos off the site. It hasn't aired on Nickelodeon since, but it still continues to air in Mexico. In my opinion, it's very generic and underwhelming. The X's really tried to get into the hype of The Incredibles and the Spy Kids series with it being a family of secret agents trying to take down villains while living a normal life. The characters aren't even that special either. The X's personality is predictable with Mr. X being a good spy, but a bumbling idiot not knowing about how to deal with everyday things such as knowing his own name and how to interact with other people. Mrs. X reminds me of Maddie Fenton from Danny Phantom and Elasticgirl from The Incredibles with her being a tough, a good mother, and kicking ass when fighting the villains. Tuesday is your typical teenager wanting to fit in and Truman is the smart kid who builds the gadgets while being sarcastic and goofy. The villains are mostly forgettable with typical world domination or taking down the X's plans and nothing else.

Unlike Catscratch, I don't recommend checking out The X's. Most people don't remember this show and there's a reason why. With a groundbreaking show like Avatar: The Last Airbender debuting at the same year, a show trying to copy off what's popular at the time and do nothing else unique will blend into the background. That's what The X's pretty much is. You're not missing out.

That's all for now. Tune in next time as we conclude 2005 with the next Nickelodeon movie Yours, Mine, and Ours.


Hope to see you around Old School Lane soon. Thanks for reading.

-Patricia
Posted by Old School Lane at 11:24 AM No comments:

Posted by Old School Lane at 9:14 AM No comments:

With Avatar: The Last Airbender gaining a huge fanbase for Nickelodeon, they needed a lighter, funnier Nicktoon for the younger crowd. With that said, Doug TenNapel's newest cartoon Catscratch debuted on May 5, 2005. Joining me today is Manic Expression member David a.k.a. Brekclub85. Welcome aboard!

Brekclub85-Glad to be here Patricia, I've been looking forward to this for a while.

Patricia- Catscratch is the story about three cats named Gordon, Waffle, and Mr. Blik who inherit a mansion and a huge fortune after their owner passed away. Unlike The Aristocats where they just sit around luxuriously and live off their wealth with listening to classic music or art, they drink root beer, go through wacky adventures, and cause huge amounts of mayhem. Mr. Blik is the leader of the group being cocky with his intelligence, Gordon is a sweet Scottish cat who is very simplistic, and Waffle is the goofy, dumb cat. Together, they do what they please with whatever the situation calls for.

Brekclub85-Admitteddly, the show had not a really original premise, but as I've established, I'm a cat person, so I can appreciate any show where the cats are the good guys. Sure, Blik could be somewhat a jerk sometimes, but I found him enjoyable to watch.

Patricia- Catscratch was based on TenNapel's graphic novel called Gear. The story is about 4 cats named Gordon, Waffle, Mr. Black, and Simon (named after TenNapel's actual cats) that are called to an artifact by the town elder to power up a giant robot named a Guardian to save their town from an enemy group. It was a lot more darker and serious, but still contained its goofy humor that TenNapel is known for with his video games such as the Earthworm Jim series and The Neverhood. Have you ever read the book, David?

Brekclub85-Nope, I didn't even realize there was a book until several years later.

Patricia- However, with the exception of 3 of the 4 cats, almost nothing from Gear made it into Catscratch. It was mostly played for laughs. While most TV shows, cartoons, and movies adapted loosely based on books or graphic novels are considered terrible, Catscratch had its own unique charm. The humor stuck very close to TenNapel's style of random and over-the-top humor consisting of our main characters. The only humans in the show are the cats' butler Hovis and the little girl Kimberly. Hovis is the stern, yet miserable butler who hates the fact that cats are his masters now, yet since his family members were butlers, he doesn't know how to do anything else. Kimberly is a sweet little girl who loves the cats as her friends. Gordon has a huge crush on her and calls her "Human" Kimberly.


Brekclub85-It was definitely a weird dynamic, for sure.

Patricia- Like most Nicktoons, Catscratch were two 11 minute episodes that were standalone that anyone can pick up and see. Episodes involving Gordon defeating a Kraken to get a normal long tail, the cats disgusing as girls to sneak in Kimberly's slumber party to drink root beer, inviting zombies over for a fancy dinner party, or getting lost in the woods and Waffle being adopted by a Hillbilly family. One of the great things about was that you never know what the plot would be about. It kept things fresh and funny while still keeping focus on what the show is trying to do. This is what The Brothers Flub should have done. 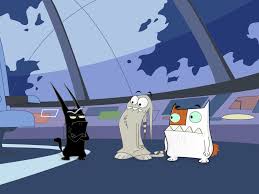 Brekclub85-That was definitely one of the biggest strengths of the show. The absurdity they were willing to go to kept the episodes from being predictable. I'm all for who decide to go crazy. 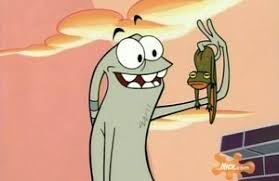 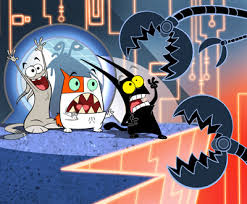 Patricia- Unfortunately, Catscratch is one of the shortest lived Nicktoons with it only lasting 20 episodes and ending its run on February 10, 2007. In my opinion, this is one of the most underrated ever and one of the best that came out in the 2000's. Around the mid 2000's, Avatar: The Last Airbender was viewed a lot more since it was a huge standout from your typical Nicktoon. Catscratch was just like all the others, so it was left in the dust and left in mainstream obscurity. That's a shame because Catscratch was a really enjoyable cartoon that had great funny moments, memorable characters, and good animation. Sure it's not as good as Avatar: The Last Airbender, but it should be recognized more. In fact, if Catscratch would've came out a few years later, it would've been more viewed since cartoons consisting of random humor are all the rage now with Adventure Time and Regular Show. If you've never seen Catscratch before, I highly recommend checking it out.

Brekclub85-Same here, I'd argue the show was ahead of its time, and it deserved better.

Patricia- That ends our review of Catscratch. Thank you so much for joining me in this review, David.

Brekclub85-Glad to be here, Patricia.

-Patricia and David
Posted by Old School Lane at 11:50 AM No comments: