Old School Lane Casual Chats Episode 68: Interview with David and Eli from You Scared of This?

Happy Halloween, everyone! In this episode of Casual Chats, Patricia interviews David Dycus and Eli Philips from You Scared of This?, a weekly podcast dedicated to reviewing every single episode of the 1991 Nickelodeon anthology series Are You Afraid of the Dark? They discuss about their earliest memories of Nickelodeon, why they decided to watch every episode of Are You Afraid of the Dark?, what they think of the show when looking back on it, and what would like to see in a reboot?

Posted by Old School Lane at 9:26 PM No comments:

Email ThisBlogThis!Share to TwitterShare to FacebookShare to Pinterest
Labels: Are You Afraid of the Dark, Casual Chats, D.J. MacHale, Nickelodeon, old school lane, podcast, SNICK, You Scared of This

5 Reasons on How Hey Arnold! was an Improvement over Doug

Continuing with Hey Arnold Month, Patricia lists 5 reasons on why, in her opinion, that the 1996 Nicktoon created by Craig Bartlett was a major improvement in every way compared to the 1991 Nicktoon Doug created by Jim Jinkins.

NOTE: THIS IS NOT A VS. SERIES OR A VIDEO BASHING ON DOUG STATING IT'S TERRIBLE COMPARED TO HEY ARNOLD!

Posted by Old School Lane at 2:50 PM No comments:

Recently it was the 16th anniversary of As Told by Ginger. Over a year ago, Patricia dedicated an entire month to the underrated Klasky Csupo Nicktoon. Last week, she was a guest on The Friday Night Nicktoons Podcast with Casey Reed and Ashli Wittenkeller showcasing 3 of her favorite episodes and talking about it. With their blessing, you get to listen to it right here on the Old School Lane YouTube channel.

Posted by Old School Lane at 6:26 PM No comments:

In this episode of Casual Chats, Patricia interviews one of two men behind the upcoming Nickelodeon documentary The Orange Years, Scott Barber. They discuss about his earliest Nickelodeon memories, why they decide to do the documentary, and what it'll be featuring.

Check out The Orange Years' links down below and donate to their IndieGogo page.

In this episode of Casual Chats, Patricia continues Hey Arnold Month with interviewing Arun Mehta, the host and producer of The Arun Mehta Show where he interviews many of the people who were involved with Hey Arnold. They talk about his earliest memories of Hey Arnold, how he got started with his podcast radio show, his favorite episodes, and more.


Check out Arun's podcast and his other links down below

In this episode of Casual Chats, Patricia interviews writer, producer, director, and Where in Time is Carmen Sandiego? host Kevin Shinick discussing about his experiences with the recently 20 year old game show, Robot Chicken, MAD, and more.


Check out Kevin's links down below
https://shiniscope.wordpress.com
https://twitter.com/KevinShinick
Posted by Old School Lane at 9:02 PM No comments:

The Origins of Arnold

It's the 20th anniversary of the 1996 Nicktoon Hey Arnold! In honor of the occasion, we'll be doing our 3rd themed month of videos of 2016 about the timeless Nicktoon. We've received the most requests of doing an episode of From Pilot to Final Product on Hey Arnold. However, Patricia decides to showcase the origins of how the character was created, the different adaptations, and how the show was eventually greenlit for Nickelodeon.

Posted by Old School Lane at 6:04 AM No comments:

Today is the 30th anniversary of one of the greatest game shows of all time, let alone one that aired on Nickelodeon: Double Dare. It's so crazy to think that since it seems not too long ago being a little kid watching this show in the living room in a small tube TV. I was mesmerized with the kids participating in the slimy games and all the final round where they would do the obstacle course. I always wanted to be in the show with my best friend Kevin or with my family depending on what version would be airing on TV at the time and run through the obstacle course to get a chance to win all those cool prizes and a trip to Universal Studios. This was around the time I was living in Philadelphia before my family and I moved to Florida. But even still to this day, I've only been to Universal Studios 4 times in the 15 years I've lived there and haven't visited there in almost a decade. Nonetheless, we're here to celebrate this amazing game show and why it's still remembered to this day by classic Nick fans.

As mentioned previously, the slimy games was the reason the show drew me in when I was a kid. Just seeing the many crazy and unique ways of the kids and adults getting messy and dirty was always one of the main highlights of the show. The messier. the better in my opinion. Even if they didn't win, it was always a treat seeing the contestants covered in slime, food, and gak whenever they competed in a physical challenge for more points. This is the reason why I felt that I felt that the original season of Double Dare was rather weak. They did obstacles from carrying eggs to a bowl, finding a rubber ducky in a small pool, or stuffing balloons inside their pants, but I always found it to be underwhelming. The show would continue to get better over the years adding more and more crazy obstacles that contestants would have to perform in. However, as I got older, there were more things that I appreciated when watching the show again. 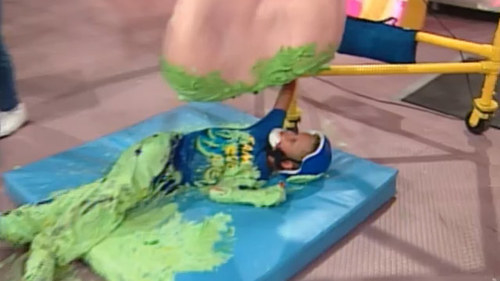 Probably the thing that makes the show still great was the host Marc Summers. Marc was charismatic, funny, and memorable. Over the years here at Old School Lane, we've covered almost all the Nickelodeon game shows. Looking back at them, the hosts were either incredibly bland like Rob Edward Morris from Make the Grade and Mati Moralejo from the 2002 remake of Wild & Crazy Kids or lovably over-the-top like Phil Moore from Nick Arcade and Mike O'Malley from Nickelodeon GUTS. Marc, on the other hand, found the perfect balance to be entertaining for both kids and adults. Hands down to this day the best Nickelodeon game show host ever. Not to mention when Marc interacts with the other Double Dare cohorts Harvey the announcer and Robin the co-host, it becomes even more fun to see. Again, when looking back on the game shows of Nickelodeon, their co-hosts were either incredibly bland, over the top, or nonexistent. Still to this day, I still think of Harvey and Robin as the definitive Nickelodeon game show co-hosts. 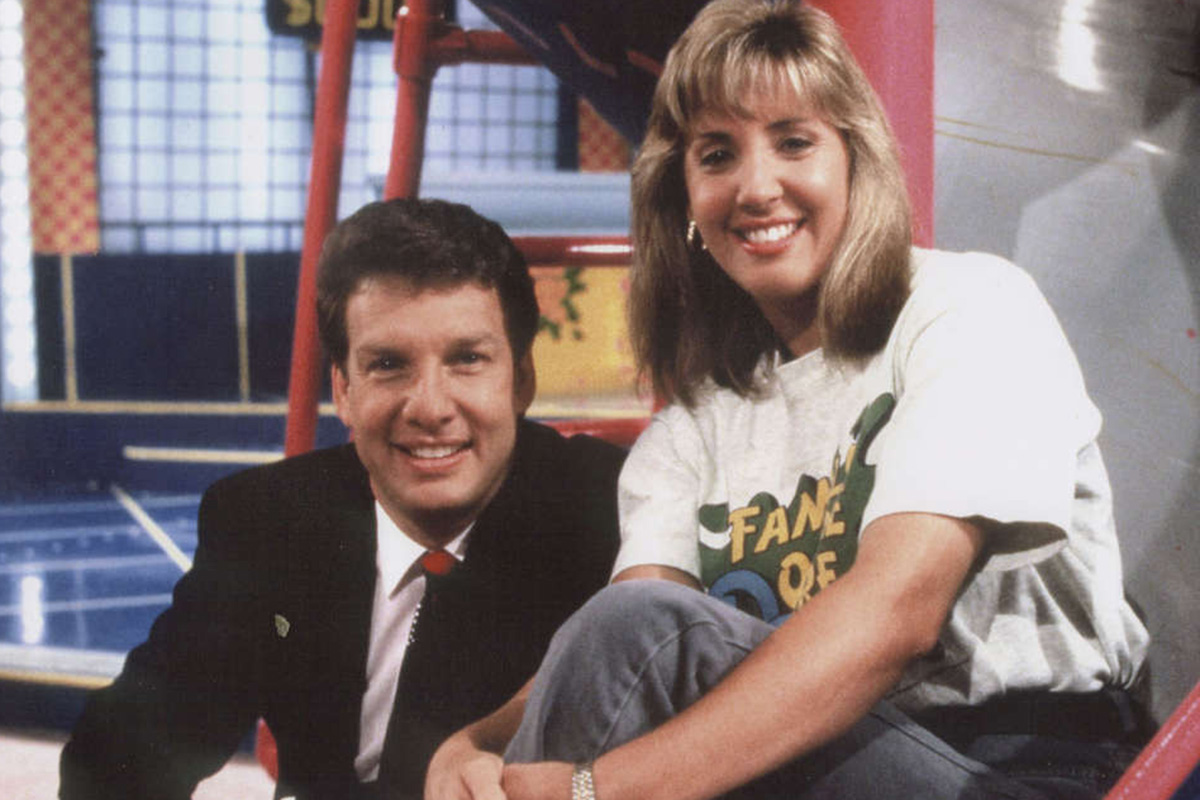 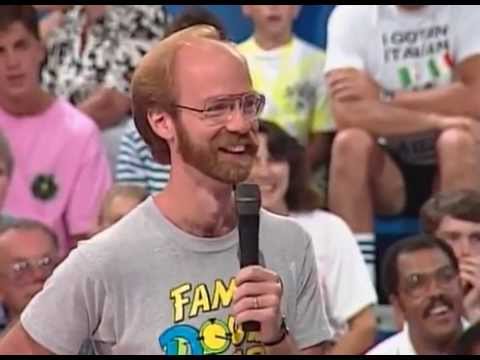 There's a reason why Double Dare has had the most amount of episodes out of all the Nickelodeon game shows. It knew what it wanted to be: a fun game show filled with mess that can be enjoyed by everyone with people who put a lot of care into it. They didn't phone it in just because it was for kids. It was a huge success that put Nickelodeon on the map and it was stamped as the definitive kids network. If You Can't Do That on Television didn't get kids into watching Nickelodeon, then Double Dare did. When they tried to reboot Double Dare around the year 2000, it didn't work. While it's not the worst Nickelodeon game show revival that came out in the 2000's when pretty much every single classic Nickelodeon game show tried to come back for a new generation, it certainly was the one that played it the most safe. It was pretty much the same as the original except with a different host and a new section of the game called The Triple Dare Challenge. While Jason Harris did a good job hosting the show, he was a pale comparison when you compare it to Marc Summers. Also, The Triple Dare Challenge was a stupid and unnecessary edition to the game. With that, Double Dare 2000 faded into obscurity after being on the air for less than a year and the original still resonates in people's minds. Then when Double Dare Live came out on the Nickelodeon Resort hotels, this was another true indication that only the original hosts and creators did it way better as it was even worse than Double Dare 2000.

I've stated years ago that Double Dare was one of the shows from Nickelodeon that I never want to see come back remade. That's because the times that they did remake it, it failed miserably. I have yet to see a new incarnation of Double Dare without Marc Summers, Robin, and Harvey that was good. This isn't the nostalgia talking if you're wondering. I'm one of the few people who prefers the revival of Figure it Out! than the original. The original Double Dare was one of the cases in which they struck lightning in a bottle. All of the elements that were put in the show fit perfectly and it expanded more with other versions such as Super Sloppy Double Dare and Family Double Dare. Both of them took the simple elements of Double Dare and improved on it. Even still to this day, Double Dare is still talked about 30 years later and has continued with Marc Summers around conventions and gatherings. The most recent Double Dare game at San Diego Comic Con with the former All That cast members was so much fun to see and reminded people on why this game show is still relevant. With the exception of the questions which both slows down the gameplay and are incredibly dated when rewatching the earlier episodes, the show still holds up unbelievably well. Definitely worth checking out if you haven't seen it before or in a while. 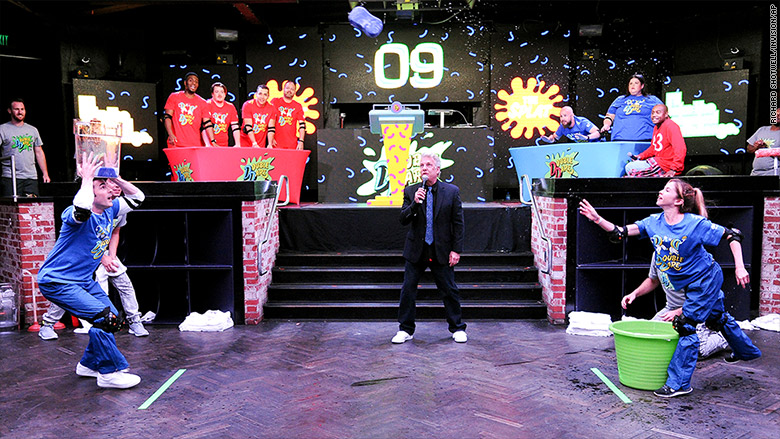 That's all for now. Tune in tomorrow as we begin our third themed month of videos. Hope to see you around Old School Lane soon. Thanks for reading.


Posted by Old School Lane at 3:14 PM No comments:

From Pilot to Final Product: Where in the World is Carmen Sandiego?

Recently, it was the 25th anniversary of the iconic PBS game show Where in the World is Carmen Sandiego? In honor of that, we'll be doing a very special episode of From Pilot to Final Product to see how the pilots differ from the TV series.

Posted by Old School Lane at 10:43 AM No comments: