Hey everyone, it's been a while. Today is the 9th anniversary of Old School Lane! Hard to believe that I've been posting content on this blog (and later YouTube channel and Anchor page) for 9 years. My life is completely different than it was all those years ago. I was a 25 year old who had no job, no friends, and no hope that life would get any better. Man, my thought process has drastically changed since then and I seen life in a more positive light despite all the horrible things that has happened this year. I want to thank all of you for your amazing support, especially over the past few days. 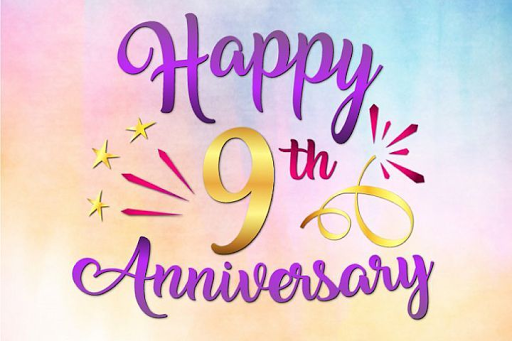 It's been a full year since I posted the older episodes of Casual Chats on Mondays, every episode of We're in Between on Tuesdays, PixMix on Wednesdays, DreamMachine on Thursdays, and Old School Lane Interviews on Fridays on the Anchor podcast site. It's even distributed on other sites such as Spotify, Apple Podcasts, Google Podcasts, RadioPublic, Stitcher, Overcast, and Breaker. I would even post episodes of Nick Jukebox and the Roald Dahl Retrospective every month. Since then, I have caught up with PixMix and DreamMachine and started posting Arun and Patricia on Wednesdays. We're almost done with posting up Casual Chats, We're in Between, and Old School Lane Interviews. I'm thinking by early 2021 we'll be all caught up. In addition, we had posted new episodes of Casual Chats and Old School Lane Interviews first on Anchor before uploading it on YouTube. Since first posting in December 15, 2020, there had been 10,000 plays, over 200 unique listeners, and listeners from all over the world tuning in from the Philippines, Australia, the United Kingdom, and many states in the U.S.A. We will continue to post on Anchor for the foreseeable future. 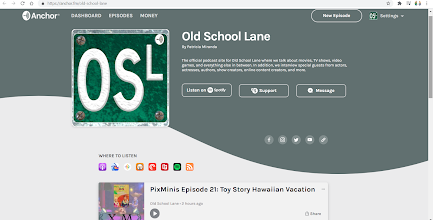 The Old School Lane YouTube channel had hit a major milestone of 8,000 subscribers around October when I made the announcement of the As Told by Ginger 20th Anniversary Reunion Livestream. But now, it's around over 8,500 subscribers. That would be the amount of subscribers Old School Lane would get in about 6-8 months. I checked out why and it's due to the Top 5 Best/Worst Rankin/Bass Christmas Specials getting a lot more traction than it ever did when I posted it last year to celebrate the 55th anniversary of Rudolph the Red Nosed Reindeer. While a lot of people disagreed with my list, a lot more other people enjoyed it and told me what their favorites were which is always great to see. I'm currently editing the video for The Aftermath of Hey Arnold: The Jungle Movie which is the 3rd and final part of the series of videos talking about The Pros and Cons of Hey Arnold: The Jungle Movie. It's been worked on for a year, especially with the massive changes going on with the management on Nickelodeon and Viacom. Hopefully it'll be out by the end of the year to round things up. For those who were thinking that the reason I haven't been posting a lot of videos this year was because I had ran out of ideas for content, that's farther from the truth. I have a lot of plans for content for Old School Lane for 2021: new episodes of From Pilot to Final Product, finishing up All That Month, Heroic Gem or Junk, and debuting some new series of videos I've wanted to do for a while. However, I haven't been able to do them due to being incredibly busy with school and major projects. Back around June, I thought that my time was up as a content creator due to my views being the lowest they've ever been. People had been complaining that I hadn't been posting enough videos for their liking. Even the new podcast series Arun and I did together such as In Search of the Crystal Skull and the Roald Dahl Retrospective hadn't gotten a lot of views. But I did the best that I could to not leave you high and dry with no content just because of my busy schedule. With 2020 being a rough year for a lot of people, I continued to follow the reason Old School Lane started off: sharing our love for movies, TV shows, video games, and everything else in between for other people to enjoy and share their fond memories with us. I will continue to do it for as long as I can and I'm not giving up anytime soon. Especially with 2021 being the year that Old School Lane will be celebrating its 10th anniversary. While I don't have a concrete idea of how to celebrate just yet, I will come up with something very special.
That's all for now. There will be a few more episodes of PixMinis to lead up to a new episode of PixMix on Soul, a new episode of DreamMachine talking about The Croods: A New Age, and at least a few more episodes of Casual Chats to round up 2020. Hope to see you around Old School Lane soon. Thanks for reading!
-Patricia
Posted by Old School Lane at 10:16 PM No comments: