Hey everyone, Patricia here. As you recall from last month, Kevin did a video on what Nickelodeon meant to him in honor of Nickelodeon's 35th anniversary. If you haven't seen it yet, you can click on the video down below.


Now it's my turn. Today is my 28th birthday and I think now is a good time to tell you what this network means to me. So, here we go!

Nickelodeon means a lot to me. Even though that they've made a lot of stupid decisions in recent years rejecting shows that had a lot of potential such as Constant Payne and The Modifyers, shows that turned out to be good to amazing such as The Proud Family, Phineas and Ferb, Dragons: Riders of Berk, and Adventure Time, relying on the Internet to create their shows such as Fred the Show, Awesomeness TV, and Breadwinners, and copying off the Disney Channel with their shows, all the things that Nickelodeon did right was amazing and became a huge part of my childhood. I first saw Nickelodeon back in 1989 when I was 3 years old seeing shows such as You Can't Do That on Television, Double Dare, David the Gnome, and Eureeka's Castle, but the show that cemented me as a huge Nickelodeon fan was The Ren & Stimpy Show with my absolute favorite episode of all time "Space Madness". I was 5 years old in 1991 when The Ren & Stimpy Show debuted. It was such an sugar rush of wacky animation and insanity in the scenes where Ren thinks that a bar of soap was an ice cream bar and where Stimpy was tempted to push The History Eraser Button. Those moments stuck on my head many years later and made me a huge fan of Nickelodeon. While I also loved Cartoon Network, Kids WB, Disney in the Afternoon, and PBS, I would choose Nickelodeon as my favorite.


Shows from Nickelodeon during the 90's were, for the most part, incredible and extremely memorable for me. Shows such as the 3 original Nicktoons, Clarissa Explains it All, All That, The Adventures of Pete & Pete, Rocko's Modern Life, Weinerville, Hey Arnold!, The Angry Beavers, Kenan & Kel, and more, were programs that shaped my sense of humor and my inspiration of becoming a writer. When rewatching this shows for the Nickelodeon tribute, I gained a bigger appreciation on these programs and how relatable the characters were, how much of the humor went over my head as a kid and understood when I got older, and how to tell a cohesive plot with great storylines. As a kid, I had little to no friends in school due to being socially awkward. But the characters from these TV shows sort of became the friends I never had growing up until I met Kevin at my 4th grade class. He also had a love for Nickelodeon and we would spend hours talking about our favorite shows after school. Of course, not every show in the 90's were flawless, you can read my article that I wrote last year on whether the 90's Nickelodeon shows are overrated right here. 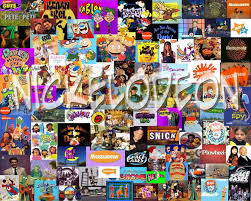 Family Double Dare, Nick Arcade, Nickelodeon GUTS, and Legends of the Hidden Temple got me hooked into game shows and I wished that I could join in one of the game shows at Nickelodeon Studios in Orlando, Florida. The sets, games, hosts, and prizes looked so awesome and everyone I knew dreamed of being a contestant of one of those game shows. I did go to Nickelodeon Studios 3 times around the 00's and even saw the employees building the set for Double Dare 2000 and went in the Jimmy Neutron simulation ride. It was an amazing experience that I never forgot and the reason why I want other kids who either never went or were too young to remember to go through the same thing. Hopefully it'll happen someday.

As I grew older in the late 90's and early 00's, I didn't watch Nickelodeon as much and I gravitated towards other networks that were showing programs for teenagers. This was also when I went through the beginning of my anime faze watching programs such as Dragonball Z, Cowboy Bebop, and Pokemon. However, when programs such as Caitlin's Way and Invader Zim brought me back watching Nickelodeon and seeing what it had to offer for the new generation. By the first episode of Invader Zim, I was immediately hooked and hadn't gotten excited into watching a new show since The Ren & Stimpy Show. I remember back in high school that the goth/emo craze was big and I had a friend who was a part of that group. We would sit at the lunch table talking about Invader Zim as well as all the other graphic novels written by Jhonen Vasquez.

This was also the time in which forums complaining about Nickelodeon in the 00's started to form. Even back in 2000, many teenagers who grew up in the 90's bashed these new programs and stated that they were inferior to the old programs that we saw as kids. For a while, I agreed with them. But then, I saw the shows that were coming out at the time and slowly I no longer listened to them. There were so many programs such as SpongeBob SquarePants, The Fairly Oddparents, Invader Zim, My Life as a Teenage Robot, ChalkZone, Drake & Josh, Ned's Declassified, and Danny Phantom that I wished were around when I was a kid since animation, writing, and character development was gradually improving. This was the first time I learned about people being narrow minded and being blinded by nostalgia hating the programs that were new and only liking the programs that they grew up with. This experience would come into fruition a few years later when I co-founded Old School Lane. However, in 2004, when I graduated from high school and entered into college, I slowly got away from Nickelodeon once again. However, 1 year later, one show brought me and my college friends back to this network: Avatar: The Last Airbender. That show was such a marvel to see when it first came out with its stunning animation, memorable characters, and amazing storyline. It was the best show I've ever seen for Nickelodeon and it was one of the most talked about topics that my friends and family brought up. A few years later, I went to my first sci-fi/anime convention in Orlando and I saw many people dress up as Nickelodeon characters such as teams from Legends of the Hidden Temple, Quail-Man from Doug, and numerous characters from Avatar: The Last Airbender. I even dressed up as a Blue Barracuda at Megacon 2008. It showed me that the love of Nickelodeon, both classic and new, is still going strong.

Then when 2011 came, Kevin and I started our blog Old School Lane and the first tribute we wanted to dedicate to was Nickelodeon. We rewatched all the old shows we grew up and gave our opinions on them. Some of them are still classics that still hold up. Others are awful trainwrecks that should be forgotten in the sands of time. A lot of our reviews and opinions on these shows and topics has brought us our fans and our haters, but we still stand by them and not worry about the negative feedback we get. We focus on the wonderful people who have been on our side for these 3 years reading our articles and listening to our podcasts. Eventually, we became associates of Manic Expression were we shared our love for all things Nickelodeon to the members. Some of our favorite episodes of Casual Chats are the ones that we've talked about Nickelodeon with the people from Manic Expression such the Rocko's Modern Life, Legends of the Hidden Temple, The Adventures of Pete & Pete, and Danny Phantom.


Then I became an admin for The Re-Open Nickelodeon Studios page and founded the Nickelodeon Slimecast Podcast. It's amazing that I've been an admin for this page for over a year and I've gotten to know so many people who have a huge passion for Nickelodeon as I did when I was young. Talking about the Nickelodeon topics is always a lot of fun and I'm glad that we have a dedicated fanbase who also enjoys listening to us discussing about them. That means more to me than you will ever know.


The Nickelodeon tribute has also giving me the courage to interview all the wonderful people who had worked on these shows that I grew up with. When Kevin first brought up the idea of trying to get a hold of people such as Marc Summers, I thought he was crazy. "There's no way we can get a hold of these people. They accept journalists or reporters to interview them, not regular fans like us", I thought. Boy, was I wrong and I'm glad I was wrong. In total, we interviewed about 30 people including Marc Summers, Cheryl Blaylock, Noel MacNeal, D.J. McHale, Moira Quirk, Craig Bartlett, Marc Weiner, Bill Burnett, Ross Hull, and more.


We even met these people face to face at the Slimed book event in NYC hosted by Mathew Klickstein (whom we also interviewed). All the work that Kevin and I put in had been worth it meeting wonderful people such as Marc Summers, John Harvey, Phil Moore, Vanessa Coffey, Jim Jinkens, and more. Meeting up with various people who also shared the same love of these shows and people was also incredible. It was probably one of the best moments that I've ever experienced in my life and a wonderful opportunity to meet up with the people that shaped my childhood.

If you haven't been to the Slimed book event, it was recorded live and has been uploaded to YouTube. Here's the video to check out. If you see the audience, Kevin and I are the ones in the first row in the middle.


So, as you can see, Nickelodeon still means a lot to me today. Sure, Nickelodeon has made a lot of mistakes over the past few years and it isn't the same network that I grew up with, but the huge impact that it made to me shaped me into a better person. I hope that Nickelodeon continues and shapes many children's lives for years to come.

-Patricia
Posted by Old School Lane at 11:15 AM