Before I begin today's review, I want to talk about a little pilot from a show that was brought over to Nickelodeon. It was called The Modifyers.


Created by Chris Reccardi and Lynne Naylor, who previously worked on The Ren & Stimpy Show, The Modifyers is about a double agent named Agent Xero who is a member of an organization called The Modifyers. Their main goal is to take down the main villain known as Baron Vain. Reccardi and Naylor presented this pilot to Nickelodeon back in 2007, however they rejected it due to a rumor stating that Nickelodeon didn't want a cartoon featuring a female protagonist. Looking back at the previous Nicktoons that has had a female protagonist, I can slightly understand why they rejected The Modifyers. I've already discussed numerous times about how underwhelming and dull The Wild Thornberrys was and how Eliza Thornberry was an awful protagonist using her power to talk to animals to make their situations worse. As Told by Ginger was a Nicktoon that, while it broke new ground for cartoons by creating story arcs, discussing about serious topics, and had the characters change and grow throughout the series, never became a huge hit due to moving to the Nicktoons Network around Season 3 and is currently the least talked about Klasky Csupo Nicktoon. My Life with a Teenage Robot also broke new ground implicating action into a Nicktoon and also having change and growth in the characters throughout the series. However, it was overshadowed by The Fairly OddParents, The Adventures of Jimmy Neutron: Boy Genius, and many other Nickelodeon shows at the time and was the shortest lasting Nicktoon out of the Oh Yeah! Cartoons shorts lasting for only 40 episodes. 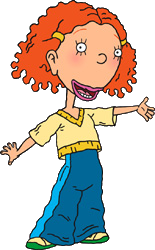 The previous Nicktoons and Nickelodeon shows I've reviewed so far in the mid 2000's have been mediocre and forgettable with the exception of Avatar: The Last Airbender. Plus, I think The Modifyers would have been the start of having cartoons starring female protagonists again with The Powerpuff Girls and Kim Possible having ended at that point. With that said, Nickelodeon did feature a cartoon with a female protagonist called The Mighty B! which debuted on April 26, 2008. 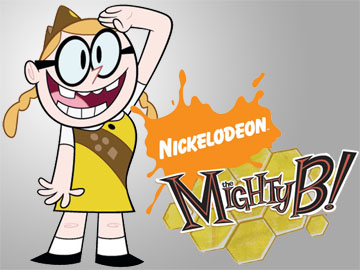 The show is about a Beescout named Bessie Higgenbottom who does everything she can to earn every badge for the Beescouts. Bessie is in the same Beescout group alongside two other girls named Portia (voiced by Grey DeLisle) and Gwen (voiced by Jessica DiCicco) who she respects a lot. However, Portia and Gwen don't like Bessie and do whatever they can to sabotage and humiliate her. However, due to luck and enthusiasm from Bessie, they always fail on their goals. Along the way, she does crazy and wacky adventures alongside her brother Benjamin (voiced by Andy Richter), her best friend Penny (voiced by Dannah Phirman), and her dog Happy (voiced by Dee Bradley Baker).

The show was created by couple Eric Wiese and Cynthia True and Amy Poehler. Eric Wiese is mostly known for being a writer and storyboard artist of SpongeBob SquarePants while Cynthia True is mostly known for being a writer and script coordinator of Johnny Test, Danny Phantom, and The Fairly Oddparents. As for Amy Poehler, she's mostly known for her work on Saturday Night Life and Parks and Recreations. The inspirations for Bessie were an amalgamation of a character she performed in the comedy troupes Second City and Upright Citizens Brigade and her character Leslie Knope from Parks and Recreations.

With that said, the show lasted for 2 seasons ending its run on June 12, 2011. When it premiered, there were positive reviews from both critics and viewers. While watching it, I did get a SpongeBob vibe from The Mighty B!, however, it was more post-movie SpongeBob, not pre-movie SpongeBob. Well, okay, it's not that horrible, but it's still not very good. While the animation is very well done, everything else is a train wreck. The characters are mostly annoying or cliched, the everyday scenarios are basic, and the humor is very hit and miss. It can range from face-paced jokes to extremely random humor and it barely works. I was left scratching my head in most of the jokes. It seems that they are trying way too hard to make people laugh with its random nonsense. In the end, it's random nonsense and nothing else.

Plus, The Mighty B! at times felt like a marketable product with the focus on Amy Poehler. Going back to the critics' reviews on The Mighty B!, almost every single one of them mostly mentioned Amy Poehler and little else. There were barely any mentions of Eric Wiese or Cynthia True. They were more like a footnote compared to Amy Poehler. Since Parks and Recreations was a popular show and The Mighty B! debuted on the same day as Baby Mama which starred Amy Poehler and Tina Fey, I felt that they just should have called it The Amy Poehler Show. It doesn't have its own legs to stand on without Amy Poehler.

In my opinion, I felt that Nickelodeon should have picked up The Modifyers instead of The Mighty B! I felt that The Modifyers would have had the potential to be an amazing Nicktoon. While the humor is very dry, the animation was gorgeous and very colorful, the characters were diverse and likable, and the concept was unique and charming. If The Modifyers would have been picked up as a Nicktoon, I think that Nickelodeon would have started climbing out of its doldrums. However, due to most likely marketable reasons, they decided to pick up The Mighty B! instead. At the end of the day, it's one of the most disappointing Nicktoons that has ever aired. It felt too much like a SpongeBob clone mixed with Amy Poehler and not like an original Nicktoon. As a standalone show, it's mostly forgettable. I don't recommend checking it out.