Hey guys, Patricia here. I'm taking a short break from Nickelodeon reviews to talk about something else I'm a big fan of: puppets. As some of you know, Kevin and I are huge Muppet, Sesame Street, Pee-wee's Playhouse, Weinerville, and Jim Henson fans. I listed Henson and Paul Reubens as one of my top 50 influences, Marc Weiner on my top 20 male Nickelodeon influences, and did a episode of Casual Chats on the criminally underrated puppet TV show Dinosaurs. If you haven't listened to it yet, please check it out right here.


While those programs are great for kids and adults, I find puppets with adult humor so much more hilarious than oppose to animated shows with adult humor. But whenever people think of puppets and adult humor, they ever think of either Avenue Q or Crank Yankers. However, there are plenty of other puppet programs with adult humor that are so funny and creative that I'm surprised that people don't talk about. In no particular order, here are the 5 puppet shows you probably never heard of, but you should definitely check out.

Created by Liam Lynch and Matt Crocco in 1997 and showcased on MTV, Sifl & Olly showcases two sock puppets named Sifl and Olly respectively doing various comedic skits and jokes. Some of them include Precious Roy's Home Shopping Network, Interview Time, S & O News, and more. The jokes range from witty, surreal, and subtle humor that make it still hilarious to this day. Sure, the effects and design seem to appear primitive, outdated, and cheap, but that's what makes it so charming. One of my all time favorites that Sifl and Olly have ever done was their ninja segment and concluding it singing "Ninja of the Night". Unfortunately, it was cancelled in 1999, less than 2 years since its debut. Since then, it has gained a cult following and even Lynch and Crocco featured them occasionally on the podcast Lynchland. If you haven't seen it yet, check it out. It's on YouTube.

Created by Dan Milano, Steven Levitan, and Spencer Chinoy, the show is about Greg the Bunny starring in a public access show called Sweetknuckle Junction, which is similar to a more raunchy version of The Muppet Show. The show relies on a lot of movie and pop culture references and has discussions on how puppets are treated like lower class trash compared to humans. I haven't seen it in a while, so I cannot tell you any episodes to check out. But if you can, check out the series on DVD.

Glove and Boots was first conceived by Damien Eckhart-Jacobi and Vincent Bova at the New York Subways around 2004 before moving to YouTube as a video blog a few years later.  It features the main characters Mario and Fafa doing various spoofs of edutainment children's programs before changing into pop culture skits. My favorites are the more recent worst game show skit and the Pee-wee's Playhouse skit. This is probably the most well known puppet program on this list having over 250,000 subscribers, but I don't hear as much people talking about it. If you're interested, go subscribe to their channel. 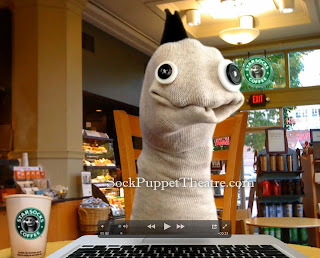 Created by voice actress April Winchell in 2012 on YouTube, Sock Puppet Theatre is about sock puppets voiced by voice actors and actresses April Winchell, Rob Paulsen, Billy West, Pamela Adlon, Bob Joles, and more doing skits based on actual comments and flame wars from sites like YouTube, Pinterest, the World of Warcraft forums, and more. It's so hilarious when you see sock puppets of various shapes and designs complain about things from feeding a dog barbecue potato chips to arguing about an alcoholic drink recipe shown at the front seat of the car performed by people who have been the voice of our childhoods. It's even more hilarious when you realize that they're based on real comments. My personal favorites are "Stop Killing Your Pets", "Jennifer Aniston's Beauty Tips", "Hippie Juice", and "Tech Support". Unfortunately, it was put on a hiatus less than a year later due to April's busy schedule and hasn't featured an episode since. Such a shame. If you haven't seen it yet, check it out.

Created by Neil Patrick Harris, David Burtka, and Janet Varney (that's right, the voice of Korra from Legend of Korra), by The Jim Henson Company at the Nerdist YouTube channel in 2012, it involves with Neil dreaming about puppets every time he sleeps which ranges from being a waiter in a restaurant to falling thousands of feet to the ground with puppets singing, dancing, or saying hilarious jokes. There are so many great people from Brian Henson, Jim Henson's son, Nathan Fillion, Janet Varney, and Joe Manganeillo performing. My personal favorites are "The Lullaby", "Doctor's Office", "Dream Bump", and "Bollywood". Unfortunately, it was put in hiatus less than a year later due to Neil, David, and Janet's busy schedules. Again, such a shame. Anything with these group of people, especially NPH, is awesome! If you haven't seen it yet, check it out.

What are some of your favorite adult puppet shows that you like, but nobody talks about? Post in the comments below.