Ever since Kevin and I came up with the idea of the Nickelodeon tribute three years ago, we dedicated our time watching almost all the Nickelodeon shows and movies, both good and bad. There are so many of them that are still fondly remembered, mostly from the late 80's and 90's. Even still to this day, people constantly talk about how amazing these shows are. I've seen numerous reviews, listened to countless podcasts, and even saw one or two Nickelodeon rants on how today's shows suck and that it'll never be as good as shows that had aired 10 or 20 years ago. It's even gotten to the point in which people think that Nickelodeon started in 1985 or even as late as 1990. I find it hilarious, but sad at the same time. While there are some people out there that grew up with shows such as Pinwheel, Today's Special, The Tomorrow People, The Third Eye, You Can't Do That on Television, and Special Delivery, the most earliest show that people can recall back in the 80's are Double Dare and Hey Dude! All of the shows that I mentioned plus many, many, more have either been ignored and forgotten or they've never even heard of them. Heck, Kevin and I never heard of any of the 70's and early 80's Nickelodeon shows until we started the Nickelodeon tribute. But why? Well I may not give the definitive answer, I'll try my best to give a decent explanation. 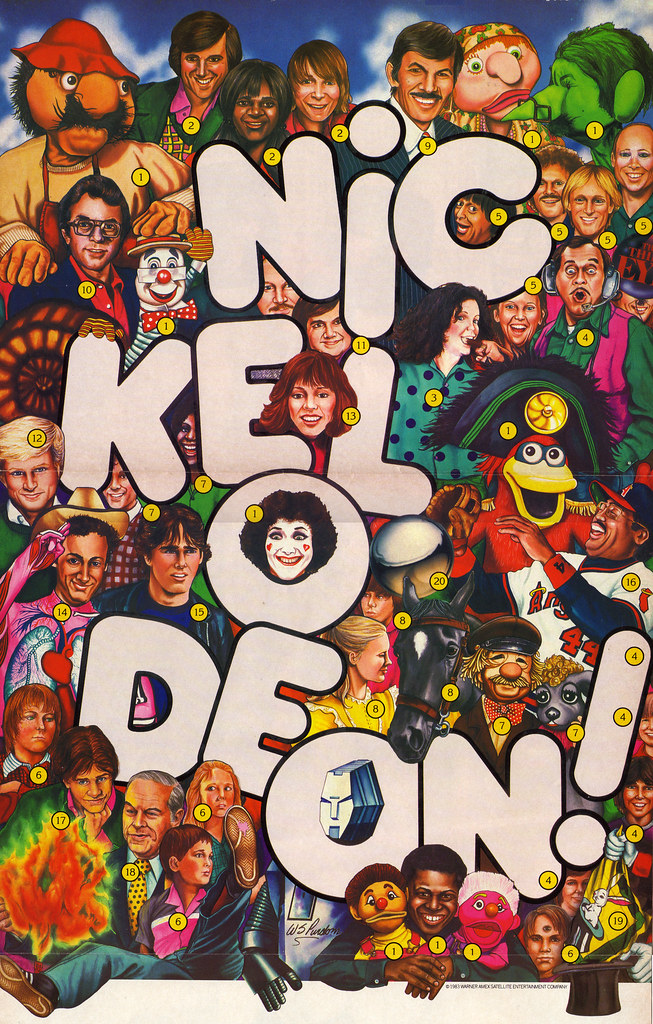 The most common reason as to why most Nickelodeon fans don't recall the programs that aired in the 70's and early 80's was that we didn't exist then or we were very, very young so we never had a chance to see them. Growing up as kids in the 90's, all of our friends in school would talk about all the shows that we also watched such as the original Nicktoons, the live action shows, and the game shows. With the possible exception of our parents, siblings, or older friends, nobody else had seen or heard of Pinwheel or The Third Eye.

The second reason on why most people don't remember 70's and 80's Nick is based on a respond that one of the nickslimecastpodcast YouTube followers had posted on part 1 at Nick at 35.

According to an article called "History of Cable" from www.calcable.org, cable around the 1960's were "frozen" due to the Federal Communications Commission (FCC) because local television companies felt threatened by cable companies getting more lucrative and stayed that way until the early 70's when it became slowly more available. At the end of the decade, 15 million people had cable. Then the '92 Act by Congress opened up other ways of people getting cable in a more affordable price such as satellite and wireless cable. At the end of the decade, over 57% of people owned cable with over 170 channels ready for viewers to watch. The era of local TV was long gone, which is where Nickelodeon was born from. Speaking of which.

The third reason is because Nickelodeon's original roots of its inception was a local network that only aired in Columbus, Ohio when it was known as the Pinwheel Network. Back then, their main focus was featuring educational programs for young children. Unfortunately, pretty much all of their educational programs were all low budget and were all acquired from either other networks or other countries. Many other television networks such as PBS, CBS, NBC, and ABC were airing original content that were both educational and entertaining with decent budgets and mainstream actors. So there was no reason for Nickelodeon to exist. But even then, that's a huge debate on that statement. The 80's was known as the dark age of children's programs focusing on cartoons based on toys, movies, or even celebrities. Plus the booming popularity of MTV didn't exactly help. With programs that no one cared about, most people didn't watch Nickelodeon. As time went on, Nickelodeon lost more money and eventually went into bankruptcy being called the worst network on television. Then 1984 came along and restarted from the ground up with the results ended up being the #1 kids' network and Nickelodeon left their struggling years behind them calling it their vegetable state. Even some of our followers don't acknowledge 80's Nickelodeon.

I usually compare Nickelodeon to Nintendo. Nintendo started as a playing card company in 1889. However, as time went on, they experimented on other things to stay afloat such as opening a taxi company, love hotels, a food company, and more. None of them worked. That is until the 1960's when they focused on making toys. It would be the stepping stone for the eventual turn into making video games around the 70's and would become a household name by being the main reason video games became popular in the 80's. Most people don't recall Nintendo during their early years, but their profitable years. Same with Nickelodeon, we don't look back on their early years, but their profitable years when they were creating original, groundbreaking shows.

Going back to our time as kids in the 90's, we stopped watching Nickelodeon around 8:00 pm since the Nicktoons stopped airing and Nick at Nite started. We either watched Cartoon Network or went to bed. While there were reruns of You Can't Do That on Television and Pinwheel, they aired around the mornings or around early afternoons. Where were kids around during those times? They were in school.

For example, here's the schedule of the Nickelodeon shows that aired in the year 1991.

Now let's take a look at the Nickelodeon shows schedules in 1993.

You Can't Do That on Television is gone completely from the schedule and more new content was being created replacing the reruns of older acquired shows. For our last comparison, here's the Nickelodeon schedule from 1998. The simple, humble roots of low budget educational shows that were originally from other countries or networks were long gone from people's memories and the new generation of kids never knew of its existence. Even though that today we have the Internet, here's another reason that 70's and 80's Nickelodeon shows had been forgotten. For the longest time, Pinwheel, Hocus Focus, Special Delivery, The Tomorrow People, Today's Special, and more were pretty much impossible to find online. The only 80's shows that had numerous episodes were Double Dare and You Can't Do That on Television. Since Nickelodeon gradually stopped airing these programs around the late 80's and the 90's, it's hard finding them in high quality. You would probably find low quality VHS recordings of them uploaded to YouTube, but there were too few and far between. So, it's very hard to become nostalgic or appreciate the early years of Nickelodeon when they're not fully available. But things are getting better. Some of the shows are being released on iTunes and there have been more recordings of these shows recently on YouTube. When I first reviewed Pinwheel two and a half years ago, there were only little clips of them that lasted for only 5 to 10 minutes when back in 1977, they aired 6 hour marathons of them every day! Now, there are over 3 hour videos of Pinwheel and the full Pinwheel Song Book.


The final reason why these programs have been forgotten is the abundance of groundbreaking Nickelodeon shows that came out. The late 80's was the first step in the right direction with creating their own original content and original bumpers with what little resources they had. Then the 90's came with them opening Nickelodeon Studios and debuting the original Nicktoons being so different than any other cartoons that had ever came out during this time period. The Ren & Stimpy Show, being the most influential, brought the idea of creator driven cartoons and gross out humor. Rugrats brought in odd animation with a simple concept for both kids and adults. Doug, despite aging the worst out of the original 3, was ahead of its time bringing in the slice of life concept that would popularize later on with shows such as Hey Arnold!, Recess, Ed, Edd, and Eddy, and more. Most people stayed on their comfort zone and watched the plentiful new Nickelodeon shows that came out year after year and most of them became instant classics.

In conclusion, we have a small idea as to why 70's and early 80's Nickelodeon shows are the main discussion of the network compared to the shows that came out later. There may be more reasons for this, but I just wanted to bring up the reasons on why I think it happened. But do they deserve to be ignored and forgotten? Of course not! While these shows are very low budget and didn't originally air on Nickelodeon, they have a unique charm to them that I can't help but to look back and smile. It makes us appreciate on where the network was before shows such as SpongeBob, Ren & Stimpy, Double Dare, and You Can't Do that on Television existed. It's like what the Happy Video Game Nerd said when reviewing Final Fantasy Mystic Quest, "Great successes come from great failures". Everything can be applied from this lesson. My suggestion: go online and check out these programs. You may not like them, but at least realize that this is where Nickelodeon started and this was all there was. It makes you appreciate the shows we had in the 90's a lot more.

That's all for now. Let me know in the comments below on what you thought of this article. Maybe I'll write similar articles like this in the future. What are your opinions of late 70's and early 80's Nickelodeon programs?