It Came From the Drive-In: Scott Pilgrim vs. The World (Secret Santa gift for The Creature)

My Secret Santa this year is The Creature, a great reviewer on Manic Expression who does a blog series called " It Came From the Drive-In" reviewing B movies and cult classics. As you know, I'm not a horror expert (Kevin's your main man on that), so I decided to tackle in a movie that I absolutely love that most people didn't appreciate when it first came out. But first, a little backstory. When Super Mario Bros. The Movie first came out on May 28, 1993, movies based on video games were born. However, it failed miserably in the box office and by fans of the Mario series due to it being completely different from the source material. However, it had gained a cult following.

Many films would follow on its footsteps of being horrible representations of the video game counterparts such as Street Fighter, Mortal Kombat: Annihalation, Double Dragon, Resident Evil, Silent Hill, Max Payne, Final Fantasy: The Spirtis Within, etc, but would get a fan base for some reason or another. With the exception of the first Mortal Kombat and one or two of the Pokemon films, I had been disappointed time and time again of these films. Sure I can enjoy them at times for being so bad, it's good, but I had wanted just one film just to be geniually good based on video games. One film eventually came on August 13, 2010. It was none other that Scott Pilgrim vs. The World.

Based on series of graphic novels by Bryan Lee O'Malley, Scott Pilgrim vs. The World is about a young 22-year-old guy named Scott who falls in love with a girl named Ramona. However, Ramona has a secret past involving with seven evil exes. Scott must fight them in order to have Ramona to himself. But the evil exes aren't the only one in his way; he must also break up with his recent 17-year-old girlfriend named Knives. 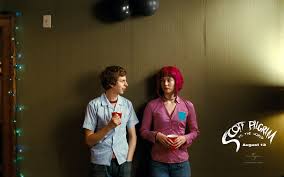 What makes this movie so awesome are the video game references. There are little homages such as The Legend of Zelda, Street Fighter, Super Mario Bros. and more in this film. Plus, they even show a pee bar, a 1-UP, and a vs. mode, a KO call, quarters, and points everytime Scott defeats one of the exes. However, it doesn't rely on these references alone similar to The Wizard in which they also talk and showcase different video games such as Double Dragon, Rad Racer, Zelda II: The Adventure of Link, Teenage Mutant Ninja Turtles, and Super Mario Bros. 3. It also has a very simple story with memorable, complex characters, a rocking soundtrack, and a unique setting. The movie takes place in Canada, which is a bit of a rarity since most films take place in big cities such as Los Angeles, Chicago, or New York City. 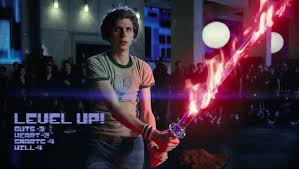 A big part of how the movie was able to work so well is Edgar Wright. I love Shawn of the Dead and Hot Fuzz with its witty humor and charming characters. He was able to bring his style to this film and it's accomplished greatly because of it. What also worked for this film was the cast. It's a nearly perfect cast with actors such as Michael Cera, Anna Kedrick, Mary Elizabeth Winstead, Jason Schwartzman, Chris Evans, and surprisingly Kieran Culkin. Everyone involved did a really great job in their roles.

The movie was a critical hit, but a financial flop making only $47 million out of $90 million. Plus it came out around the same time as The Expandables and Eat, Pray Love. Toy Story 3 was released a month before Scott Pilgrim, which made it a little difficult to attract the younger audience. But after the movie was released on DVD and Blu-Ray, the movie started to build the audience more and more receiving its cult following. Plus the video game adaptation, which is also awesome, began to pick up popularity to people who loved old school video games and the film itself. 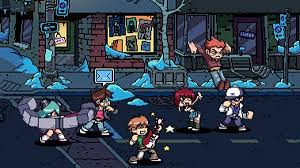 Overall, I love this film. It's one of the most underrated films in the last decade. It was able to get a concept of adapting video games to a mainstream film right while making it a standalone movie. Plus it has gotten me hopeful of more video games being adapted into films thanks to Scott Pilgrim (and Wreck-It-Ralph). This makes me more thrilled about the upcoming Ratchet and Clank movie coming out in 2015. A new age of awesome video game films has arrived. 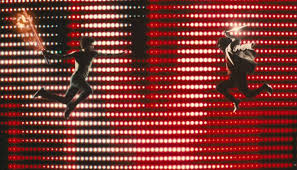 -Patricia
Posted by Old School Lane at 10:35 AM