To conclude 2006 on Nickelodeon, Nickelodeon Movies debuted its 3rd movie in theaters. As you saw from the picture of the farmer from Barnyard, the next movie is Charlotte's Web. Based off of the classic children's book written by E.B. White, Charlotte's Web tells the story of a pig named Wilbur living in a barn befriending a spider named Charlotte who helps Wilbur saves his life from being killed by the farmers by making webs with complimentary words on how special the pig is. There was already an animated film based on the book in 1973 done by Hanna Barbera. While it currently has mixed reviews, I still have fond memories of the movie watching it all the time on VHS when I was a kid. A sequel of the animated movie came out 30 years later in 2003 by Paramount Pictures. I've never seen that movie and have no interest of seen it. But how does the 2006 Nickelodeon movie based on the same book fare out? Is it just as bad as all the other Nickelodeon movies that came out that same year? Let's find out.

The movie opens up in a farm in Maine where a little girl named Fern Arable (played by Dakota Fanning) living her everyday life on the farm with her mother, father named John, and younger brother Avery. One rainy night, she sees her father walking in the barn and Fern is confused as to why he's going in late at night. She wanders in the barn and sees a sow with 10 piglets fighting over their mother's milk. The father comes in and looks at the sow and piglets and sees an 11th piglet smaller than his siblings struggling to get some milk, but with no success. He grabs the piglet alongside with an axe to kill it. Fern sees what his reason was to go into the barn at night and stops her father from killing the piglet. He tells her that since he's the runt of the litter and that there's not enough teets in the sow to feed him alongside with his brothers and sisters, he's practically worthless to keep around. Fern convinces her father to keep him and he eventually accepts. 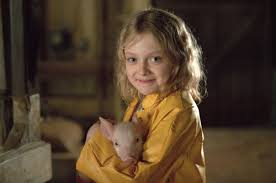 Fern names the pig Wilbur and spends her spare time feeding him, bathing him, and taking him out for walks in a stroller. Weeks go by and Wilbur grows bigger and bigger. As time goes on, John tells her daughter that Wilbur is old and big enough to be sold to another farm. Fern is upset about this, but then feels a little bit better that Wilbur is sold to her uncle Homer Zuckerman's farm. Wilbur is transferred to the farm and feels out of place meeting up with different barn animals in a different setting. Slowly, he starts feeling right at home with Fern coming to visit him everyday and playing in the mud by his pen. Sooner or later, he starts feeling lonely and wants someone to play with. None of the other animals such as Samuel the sheep, Golly the gander, or Templeton the rat, want to play with him. The animals tell Wilbur the truth that the reason why he's here is because he's being fattened up to be killed for Christmas dinner. Wilbur is shocked by this and becomes incredibly upset. All of a sudden, a voice talks to Wilbur telling him to calm down. Wilbur is wondering who that is and a little spider appeared before him. The spider introduces to Wilbur as Charlotte A. Cavatica. The other animals are scared of the spider, including Wilbur who sees Charlotte describe her love of eating flies by drinking their blood. But eventually, Wilbur warms up to Charlotte when she tells him that she'll help save his life.

A few days later, the spider web reads the word "Some Pig" and Mr. and Mrs. Zuckerman are amazed by this "miracle". They invite everyone in the town and are amazed by this. Eventually, they slowly forget about Wilbur and the farmers still have their plan of killing Wilbur for Christmas dinner. Charlotte calls a barn meeting and the animals, except for Templeton, think of words to put on the web. Eventually, they think of the word "Terrific". The same praise from the community comes to the barn and is eventually slowly forgotten. Wilbur is still afraid for his life and Charlotte convinces Templeton to help them out since without Wilbur, no food will be put in this trough and eventually, Templeton will starve. Templeton agrees and heads over to the dump to find a word. Two owls, looking for food, find Templeton and chase him. Templeton escapes and finds words from a detergent box saying "radiant". With this third word at the web, more and more people visit the barn and Wilbur becomes more famous and popular.

Fern is still visiting her uncle's barn everyday and tells her parents about how the animals are working hard to save Wilbur's life thanks to Charlotte. Her mother is concerned about this and sees the family doctor about this. He tells her that there's nothing to worry about since she's still a child and will eventually grow out of it. She's relieved in listening to this since Fern has also been seeing her friend Henry Fussy from school. Meanwhile, summer is almost ending and the county fair is approaching. Homer Zuckerman enters Wilbur into a competition for pigs to win first place. Wilbur asks Charlotte to come along, but she hesitates at first. Wilbur wonders why and Charlotte lets her know that she needs to do some personal things for herself and needs to stay. Wilbur convinces her to do her personal things at the barn and she accepts. Templeton joins along so that he can help Charlotte find more words for the barn, but in reality, he wants to eat all the leftover food from the fair. While arriving at the fair, things are not looking well with Fern going to the fair with Henry Fussy and Charlotte meeting a fatter pig named Uncle who's also in the competition. Charlotte gives Wilbur encouragement of being some pig, terrific, and radiant. Later on, Templeton finds a new word for Charlotte to add to the web. Charlotte works hard on the web while Templeton leaves to eat the leftover food.

The next morning, Wilbur finds Charlotte weak and tired with an egg sack filled with Charlotte's 514 eggs. She tells Wilbur that while she's happy for her babies, they won't be hatching till next spring and she's starting to feel her old age. All of a sudden, the farmers come to see Wilbur and see the web with the word "humble". More and more people look at the web despite learning that Uncle won first prize at the fair. The people at the fair ask Homer Zuckerman and his family to bring Wilbur with them. The fair gives Wilbur a special award for being a very special pig that has started becoming a big part of the community. Homer gives an announcement that because Wilbur has become a special pig, he will let him life a ripe old age.

When Wilbur returns to show Charlotte the medal, she tells Wilbur that she's reaching her final moments of life. Wilbur is saddened by this and tells Templeton to retrieve the egg sack in return of letting him eat first. Templeton agrees and grabs the egg sack. Charlotte later dies and Wilbur becomes very upset about it. Later on, they return to the barn and Wilbur starts watching over the egg sack. Summer, fall, and winter passes and Fern slowly stopped visiting Wilbur or her uncle's farm and starts dating Henry Fussy. Spring arrives and Wilbur sees the egg sack hatching and baby spiders coming out. Most of them leave to make webs for themselves while 3 baby spiders stay because they're too young to go by themselves. Wilbur names them Joy, Aranea, and Nellie and the movie concludes with him taking care of them and all the baby spiders from Charlotte's descendants who are too small to go alone. 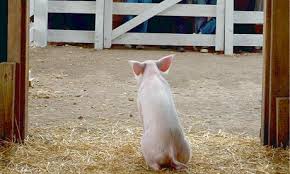 The movie received positive reviews when it came out and became financially successful making over $144 million dollars at the box office. As for me, I found the movie to be okay. While I thought that it was able to stick close to the book and Dakota Fanning did a good job playing as Fern and Julia Roberts playing as Charlotte, everything else was okay. I found Wilbur in this adaptation to be a bit too cheerful, childish, and happy. It didn't help much with the voice. Wilbur was voiced by Dominick Scott Kay, who was 10 years old at the time. I could understand when Wilbur is still a young pig throughout 2/3 of the film, but when you see him older in the fair and the end of the movie, it felt a bit off to me. I thought that another voice actor should have done it or maybe someone older should have voiced him.

The other characters in the movie were very underdeveloped and at times seemed pointless. A big example for me are the farm animals and Henry Fussy. The animals, with the exception of Charlotte and Templeton, added nothing to the plot. This seemed more like showing off people such as Oprah Winfrey, Cedric the Entertainer, John Cleese, etc. providing the voices of these animals and less on broadening their character traits. I could say the same way about the book and the 1973 adaptation as well since they're not in it for very long. But I felt that the time that they were in the book and the 1973 adaptation was able to develop them better with the small amount of time they were in it. Henry Fussy is another one I have issues with in this movie. While not being a big part of the book, the 1973 adaptation had more scenes with him and Fern and we got to know more of his backstory with the inclusion of his mother. Henry's mother was a stick in the mud making Henry playing violin and not allowing Fern bringing Wilbur to the house due to her dislike of pets. In the fair scene, Henry changed when seeing his grandfather's farm and becomes more freer and becoming more closer to Fern. Henry in the 2006 film was mentioned and seeing once and that's it.

Despite these flaws, this is the best Nickelodeon movie I saw in 2006, at least it's the one with the least amount of noticeable problems. If you're interested in seeing an adaptation of the classic children's novel, check this one out and the 1973 adaptation to see which one you prefer.

That's all for now. Tune in next time as we go into the year 2007 with a review of Just Jordan.