Originally posted at oldschoollane.tumblr.com at December 31, 2011.

It's New Year's Eve! The last day that 2011 will grace our normal routines before fading into obscurity in our history books 50 years from now. In my last post about my top 5 video game comebacks of 2011, it made me think of the celebrities that had made such great comebacks. While I could write down about Jennifer Lopez, Britney Spears, or Robert Downey, Jr., that would be too obvious and boring. Here at Old School Lane, we try our best to stray from the predictable. You could probable look them up at Time Magazine or some celebrity website that could tell it in better detail than I could actually care to do. So I'm going to talk about my favorite moments of this year from my favorite bow-tie wearing man-child, Pee-wee Herman.

While it may be true that he hadn't rocked Entertainment Weekly or Access Hollywood compared to the other celebrities, that doesn't mean he was a slouch. On the contrary, he accomplished a lot since his comeback close to three years ago and his fans couldn't be more happy for it. Here are some of my favorite moments.

On January 15, Gwyneth Paltrow hosted Saturday Night Live and Cee-Lo Green was the singer. While the episode had its high and low points, the highest one for me was Andy Samberg meeting Pee-wee at the bar and taking copious amounts of shots. Afterwards, they rode a mechanical bull, danced the Tequila dance, bashed news correspondent Anderson Cooper with a wooden chair, and had a short intervention which ended with more shots. It was so great seeing Pee-wee at SNL again since he hasn't been in it in over 25 years. Here's to hoping Pee-wee will host an episode in 2012. Hey, if they got Betty White to host, why not Pee-wee?

The funny thing about all of this is that Pee-wee had an interview with Anderson Cooper the following day at CNN. Anderson is quite the trooper.

After The Pee-wee Herman Show finished its Broadway run, the Tony Awards was right around the corner. Unfortunately, they had no nominations. That really got me angry when I first heard that. However, that changed when I heard a few months later when I heard that the show was nominated for three Emmys. That is quite an accomplishment after being out for a short time. Here's his response to it at the Red Carpet.

Although they didn't win any Emmys that night, don't despair. If the Emmys wasn't going to recognize his creative genius, then someone else will. We'll bring that up a little later.

3. The final episode of Batman: The Brave and the Bold.

Although not as dark and epic as Batman: The Animated Series, for what it is, it's pretty good. There were a lot of cool characters voiced by talented people such as Neil Patrick Harris and Adam West, but none was cooler than Paul Reubens voicing Bat-Mite.

This 5th dimension Batman obsessed creature known for breaking the fourth wall has appeared in four episodes, but his magmum opus was the final episode, Mitefall. Most final episodes for a superhero cartoon end with the superhero fighting the main villain in the efforts to save the universe. But not this one, it's all about Bat-Mite getting the Brave and the Bold cancelled and replacing it with a darker Batman cartoon. He is the highlight of the whole episode.

2011 was a great year at Comic Con. Mike Judge was promoting the comeback of Beavis and Butt-Head, Mike DiMartino and Bryan Konietzko was revealing new information about The Last Airbender: The Legend of Korra, and Pee-wee Herman made a guest appearance at Comic Con. He presented three different video interviews discussing about his comeback, the new movie produced by Judd Apatow, and many more. Here's my favorite interview. Enjoy.


The worst part about this was that I was in California for the summer and I couldn't go due to financial issues. Oh well, maybe next year.

5. Pee-wee's influences with the NFL

You might be wondering what I'm talking about. Here me out about this and get comfortable because it's a doozy. After Pee-wee's appearance at Comic Con, he went straight to San Antonio, TX to be a guest judge at Bravo TV's Top Chef: Texas. (Unfortunately, that episode won't appear this year, so that moment will not count). Along the way, he visited the Dallas Cowboys in the middle of their training day.

One month later, Pittsburgh Steelers player Ziggy Hood did the same thing after he sacked the Cincinnati Bengals quarterback.

Man, who would have thought that the Tequila dance would still be cool after all those years.

Last year, the movie which is now considered a cult classic, Pee-wee's Big Adventure turned 25. This year, the TV show which TV Guide called one of the best cult classics of all time celebrated its silver anniversary. 45 episodes of crazy, yet memorable characters, stop motion animation, puppets, cartoons from the 30's and 40's, and much more is what's awaiting you as you see this awesome kids show from the 80's. From the wacky 2 minute intro sung by Cyndi Lauper to Pee-wee riding his scooter, this show is an undeniable classic that really influenced a lot in entertainment and pop culture history. I don't know what TV would be like today if Pee-wee's Playhouse never graced our viewing eyes. What better way to be more appreciative of this awesome show than this next moment.

7. Inside Pee-wee's Playhouse: The Untold, Unauthorized, and Unpredictable Story of a Pop Phenomenon by Caseen Gaines. In November 1, to celebrate the 25th anniversary of Pee-wee's Playhouse, a writer named Caseen Gaines interviewed over 100 people who were involved with the show and put together this book of their unbelievable stories. This book chronicles all the way to the career of Paul Reubens in his early years with the Groundlings to the final Broadway show in 2011. It has over 250 pictures, an episode guide, a chapter dedicated to the Christmas Special, and so much more. This is a book you should definately check out if you're a huge Pee-wee fan. Kevin and I have ours and we love every minute of it.

8. The Simpsons: Episode 494: The Ten-Percent Solution

In this episode written by Dan Castellanella and his wife Deb Lacusta, Krusty's show gets cancelled...again, but this time Bart and Lisa don't help him get back on TV. Instead, an agent named Annie Dubinsky, played by Joan Rivers, helps Krusty with his comeback by making his kids show for adults. Gee, does that sound familiar? If not, I'll give you a hint.

That's right, Krusty's comeback is just like Pee-wee's comeback, all the way down to the stage show and the reactions from the audience feeling like kids again. Besides that, it's a okay episode, check it out.

Another thing to bring up is Joan Rivers is great in this episode. It seems that there's a kind of special connection between her and Pee-wee Herman. First, she was in his Christmas Special. Next, Pee-wee was the first guest on her short lived late night talk show. After that, Joan went to see his show on Broadway. Finally, Paul Reubens jokingly said that Joan would play Pee-wee in his biopic which was mentioned in an interview at Comedy Death Ray.

In October 15th, Spike TV awarded many movies and actors left and right. Darth Vader won for Best Villain alongside George Lucas. Robert Downey, Jr. won the Hero Award while many people had posters that had the same look and color as President Obama's election poster, and Paul Reubens won the Visionary Award for his creative mind and a vision to create one of the most iconic characters of all time. How did he present himself on stage? Like this!

That's right. The same bike from Big Adventure. The Scream Awards was great overall, but they really saved the best for last for everyone's favorite visionary. Paul may have not gotten an Emmy this year, but that doesn't matter anymore. Now people finally recognize him as the visionary genius that he is.

While Pee-wee had a few guest appearances this year, the Halloween episode with Jimmy Kimmel is my favorite. Pee-wee comes with his Halloween costume dressing up like Dracula due to the popularity of vampires, while Jimmy is dressed like Donkey Kong. 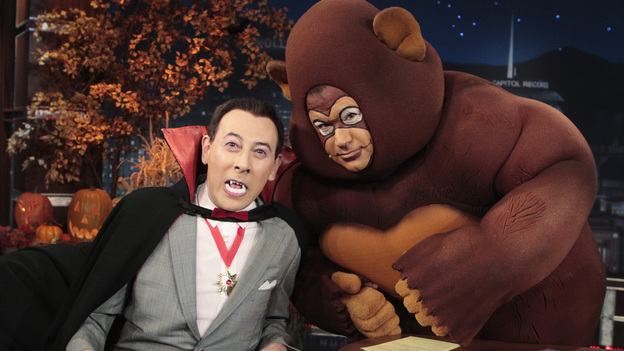 First of all, that is awesome. Finally, a real looking traditional vampire that doesn't gleam in the sun and has the personality of styrofoam. But the best part is when Pee-wee prepares his Trick or Treat soup and shrinks Jimmy to a small size and takes over his show for a brief moment. That was beyond awesome!


That concludes my list of my favorite Pee-wee Herman moments in 2011. Hope that we see a lot of other awesome moments in 2012. Hopefully, some more news about the new movie, if the rumor of him being in next season's Dancing with the Stars is true, the upcoming episode of Top Chef: Texas, and who knows what. Thanks a lot for reading this. See you in 2012.

P.S. Pee-wee, if you're reading this, I want you to know this. We, here at Old School Lane, want to say that we love you and support you. We hope you have a great new year.

Update: A few days after posting my list, I received a thank you post from both Caseen Gaines, the author of Inside Pee-wee's Playhouse and Pee-wee Herman himself on my Facebook account. I was beyond thankful and happy for those posts. Thanks again, guys.

Caseen Gaines: "Awesome list! I'm so honored to be included! Have a great 2012!"