Hey everyone, welcome back to my list of my absolute favorite animated shows. Patricia and I are hard at work rewatching Nicktoons and SNICK shows for our tribute to Nickelodeon for this summer, which means that I should finish this list. Let's get to it.

Created by Max Fleischer in 1930, Betty Boop was one of the first animated sex symbols, but that's not what makes her so memorable. She is super quirky, funny, and gets into a lot of fun adventures alongside her boyfriend Bimbo the Dog and their friend Koko the Clown. Watching the majority of the episodes is so amazing to watch as it has influenced a lot of animation history with its amazing drawing designs, surprisingly adult storylines, and quirky humor. It's such a shame that many, many people don't seem to know that.

One of the major moments for me was when Betty Boop made a cameo in Who Framed Roger Rabbit, it was great that she was able to appear twice in the movie. One of them was when Eddie Valliant sees Jessica Rabbit for the first time.

However originally Koko the Clown and Bimbo the Dog was supposed to be in Who Framed Roger Rabbit as well. There was a scene in which it was Marvin Acme's funeral and Koko and Bimbo was crying over Acme's casket, but it was cut from the movie. That's a real shame. I would have loved to see them in the movie. Due to the popularity of The Muppet Babies, we were seeing a ton of younger or baby versions of our favorite characters. One of my favorites was A Pup Named Scooby-Doo. Taken place in Coolsville, their hometown, our five companions take on ghosts and monsters which end up being bad guys in masks. It was very similar to Scooby-Doo, Where Are You? except that the tone of the show was much more lighter and goofier, which to me was always fun to watch. Casey Kasem and Don Messick would return voicing Shaggy and Scooby-Doo, but this would be Don Messick's last time voicing Scooby-Doo before he would voice other characters until his death in 1997.

Another thing to mention is that Tom Ruegger was the developer of A Pup Named Scooby-Doo before he would be one of the co-creators of Tiny Toon Adventures, Animaniacs, Pinky and the Brain, Histeria, and Road Rovers. He was also the one who wrote the lyrics for the main opening theme. Pretty neat, huh? If people were to look Rocky and Bullwinkle for the first time, they probably wouldn't be too impressed with the animation. While it's true that the animation doesn't look as polished, colorful, bright, and good compared to many others, the characters, the witty adult humor, and the pacing of the stories make up for it. Similiar to DragonBall Z, it always leaves you at a cliffhanger wanting to know about what happened next, making it addicting to know what happens next. The characters were extremely memorable, the writing of the stories were done very well, and it's still just as fun to watch as it was over 50 years ago. I highly recommend that you watch this show again if you haven't seen it in a while. 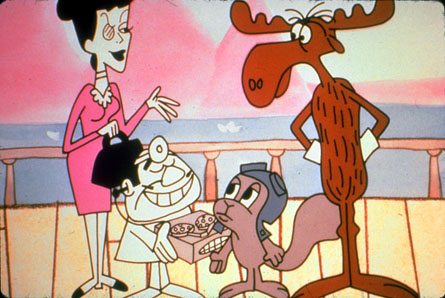 One more thing to note: don't watch the movie! It's terrible! Another great cartoon done by Hanna Barbera, it involves 11 racers competing to win the title of "World's Wackiest Racer". While all the racers had their own vehicles and personalities, my absolute favorite was the villain Dick Dasterly and his companion dog, Muttley with their vehicle Mean Machine 00. Each time I see them, I can't help but always laugh out loud everytime they try to cheat to win the races. However, they never win and their plans never work, which is a shame since I would have loved to see what would happen if they won. It only had 17 episodes, but the show was successful enough to release two spinoffs:The Perils of Penelope Pitstop and Dasterdly and Muttley in Their Flying Machines. 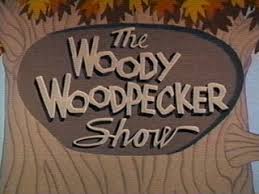 This great cartoon show starring our favorite crazy woodpecker was a big hit when he was first introduced in 1940 by Walter Lantz. This cartoon not only has Woody Woodpecker, but also many other characters like Andy Panda, Chilly Willy, Buzz Buzzard, Wally Walrus, and more. Each episode was always funny to watch as Woody causes mischief to anyone he comes across. Also, you can be able to get Woody Woodpecker dolls in Universal Studios, which is great that this character is anything but forgotten. The Fairly Odd Parents is indeed one of the best shows that Nickelodeon ever released. Not to mention, it's one of the longest running shows of Nickelodeon releasing over 100 episodes. The story involves 10-year-old Timmy Turner and his fairy godparents Cosmo and Wanda granting Timmy's crazy and extreme wishes while not letting his parents, his evil babysitter Vicky, his friends, or his crazy teacher Mr. Crocker of his secret. Created by Butch Hartman, the show has funny humor, great characters, and an interesting concept. I wish that I have fairy godparents! That would make life so much easier.The Fairly Odd Parents was one of four cartoons that debuted in Oh Yeah, Cartoons! as shorts before getting its own TV series. It's still a great show that you must watch if you're a Nickelodeon fan. Alvin and the Chipmunks was one of the best cartoons that came out in the 80's. Alvin, Simon, and Theodore Seville are three chipmunks who are a singing group singing classic songs and popular songs of the time. Dave Seville, their adopted father and manager, was a great character who loved the Chipmunks as his own sons, but would lose his temper whenever they caused trouble, especially Alvin. Also, I love the female trio, the Chippettes, Brittany, Jeanette, and Eleanor. They were a great rivals to the Chipmunks and were their on-and-off girlfriends. However, they were nothing more than female versions of the Chipmunks, so it was a tad bit of a letdown.

One of my all time favorite episodes was when Alvin, Simon, and Theodore's birth mother reunited with her sons. It was one of the few TV moments that made me cry a little. If you have children who only know about the Chipmunks from those crappy movies, show them the animated show instead. It's much better in every way. 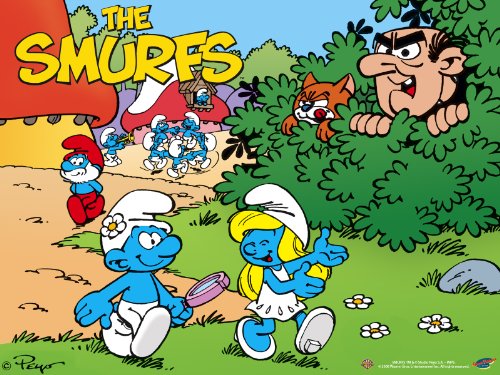 Originally from Belgium, this Hanna Barbera cartoon was very unique in every single way. The Smurfs are little blue creatures who live on a village with houses made of mushrooms, led by the leader Papa Smurf. The Smurfs live pretty much normal lives, until an evil sorcerer named Gargamel and his cat Azrael tries every scheme to capture the Smurfs and eat them. Each episode was always fun to watch. It's also very fun to ask some of the most dire questions when watching this: If there are so many Smurfs in the village, why is there only one female there? Why do they say "Smurf" or some variation in their vocabulary? Why does Gargamel want to eat the Smurfs? What do they taste like? Euugh! I don't even want to think about that!
Overall, it was a fantastic 80's Hanna Barbera cartoon that you should watch again if you haven't in a while. I beg of you to not watch the movie! Although, I've never seen it, it looks shitty. Originally, Nickelodeon was going to do the Smurfs movie that involved with the origins of the Smurfs and it was going to be have a more darker, serious tone. Why didn't we get that but instead got this?! This animated cartoon created by Bruce Timm and Paul Dini, the same creators of Justice League and Justice League Unlimited, produced by Steven Spielberg, and written by Tom Ruegger and the majority of the Animaniacs writers. It involves with a geeky 16-year-old named Dexter Douglas getting his superhero powers from a computer bug that absorbed all information from the Internet. At least the early 90's Internet. Similar to The Tick and Aqua Teen Hunger Force, Freakazoid may be a superhero, but he doesn't act like one. It involves with silly humor, fourth wall jokes, brilliant satire to cartoons that were showing at the time, worldly events, and comic book heroes. This cartoon was definitely for adults in contrast to Tiny Toons and Animaniacs, that's what made it great.

Just as I said previously in A Pup Named Scooby-Doo, when The Muppet Babies went on the air, many other shows try to captalize on its popularity of creating shows based on the younger versions of cartoon characters. One of the first that came out of the 90's that I used to watch all the time was Tiny Toon Adventures.The show was based in Acme Acres in which Toons like Buster Bunny, Babs Bunny, Plucky Duck, and Haminton Pig are attending a school called Acme Looniversary taught by Bugs Bunny, Daffy Duck, Porky Pig, Sylvester the Cat, and more. Each episode has so much humor, wackiness, and memorable characters. It's fantastic in every way! I also watched The Tiny Toon Adventures: How I Spent My Vacation. It's a wonderful summer movie! 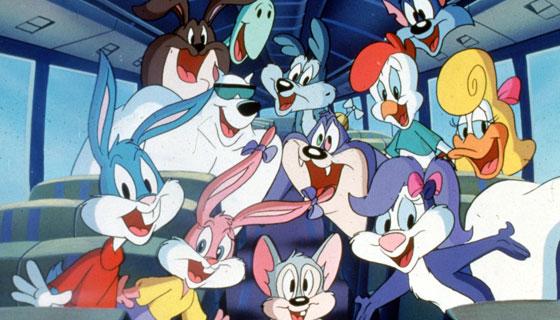 That's all for now! Stay tune as we finish off the list of my favorite animated shows. Hope to see you around Old School Lane real soon. Take care.