In recent years, the Sonic The Hedgehog series had a fantastic comeback with critically acclaimed games like Sonic Colors and Sonic Generations. However, with Sonic The Hedgehog 4, the newest sequel to the original Sonic The Hedgehog games have had a bit of a love/hate sort of relationship with Episode I. For me, I wasn't really crazy about Episode I when I played it back in 2010. The controls were a bit floaty, some of the platforming jumps were a bit difficult than they needed to be, the music was a bit forgettable, and the levels were nostalgic, but a bit underwhelming. I said to myself after completing it "Hey, this is the first episode of Sonic 4, I'm sure that they'll iron out the major flaws and improve the game at Episode II. Well, Episode II has finally been released with the addition of Miles "Tails" Prower. Will this game speed our way to our nostalgic hearts or has our favorite hedgehog slowed down with time? Let's dash into Sonic The Hedgehog 4: Episode 2. The graphics look so much like the old school Sega Genesis Sonic The Hedgehog 2 for a new generation. The colors are vivid and bright, the levels look detailed and crisp, and throughout each level, your eyes are greeted with the variety of different levels. From the castle level in Stage 1 to the classic oil level by the desert, you're in for a real treat going back to your childhood with these iconic stages. Unfortunately, that's the only positive thing you're going to hear from the entire article. Brace yourselves! 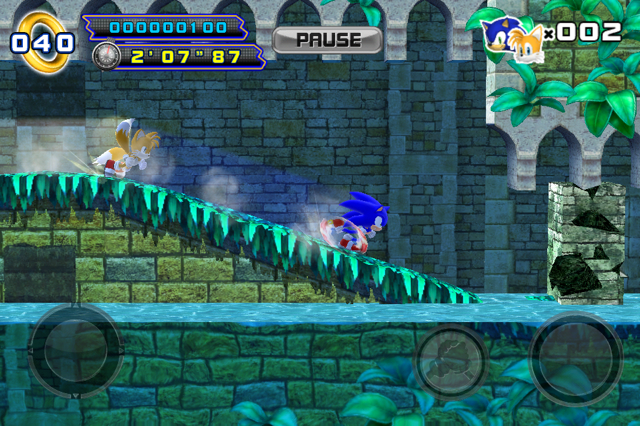 The gameplay is good old fashioned running, jumping, spinning, and defeating Dr. Eggman after each Stage 3 level.  Not to mention, the classic bonus stages to retrieve the Chaos Emeralds are a blast to play through. They truly make me feel like a kid again going through them. There are some moments in which you team up with Tails to fly up platforms, break down walls, and do a dual spin dash. The majority of the time of controlling Tails is an awkward mess, especially when it comes to the underwater level in which you have to break the ice barriers. You're trying to break the ice before Sonic and Tails drown, but it controls so awkwardly, that you end up drowning before you beat the level. You need to use Tails way too many times than needed and it feels forced and trite. While the controls feel more smoother and less floaty than Episode I, the addition of Tails just ruined the whole experience. Even when playing alone and without Tails, it doesn't feel satisfying. It's a shame too because Tails isn't a bad sidekick in the video game world and it would have been great to have two people play together similar to Rayman Origins, the best co-op experience to date. It feels like a lost opportunity. The game takes place after Episode I. Dr. Eggman had finally completed repairing Metal Sonic after Sonic defeated him in the Sega CD classic Sonic CD. Also, Dr. Eggman has finished building a new Death Egg called the Death Egg mk. II and is planning his evil ways once again. Sonic teams up with Tails and together they go through level and level defeating Dr. Eggman and Metal Sonic. The story is pretty typical for a Sonic game, so no complaints here.

You can play local or online multiplayer teaming up with someone to play through the levels. As I said previously, it's not a fun experience. Also, if you have Episode I and II saved in your console, you can unlock Episode Metal in which you get to find out what happened to Metal Sonic between the events of Episode I and II. After you beat the game, you unlock more levels to play. Other than that, there's really no replay value, which is a huge disappointment since Sonic Colors and Sonic Generations had tons of collectables, Easter Eggs, and overall fun gameplay.

Overall, Sonic The Hedgehog 4: Episode 2 is a step back to returning Sonic to his former glory. I can go back and play the recent Sonic games like Colors and Generations anytime, hell, I can go back and play the original Sonic The Hedgehog 2 game. If anyone were to ask me what my favorite old school Sonic game of all time is, it would be Sonic The Hedgehog 2. A close tie for second would be either Sonic 3 or Sonic CD. To quote Tim Turi from Game Informer magazine, " Playing Sonic 4: Episode II co-op is like returning to your favorite family vacation destination as an adult and bringing along a friend. You point at the broken attractions and try to convince them how good things used to be, but no amount of nostalgia can change the fact that the powers that be have let your beloved memory deteriorate". Remakes and reboots based on our favorite games from our childhood is pretty much everywhere nowadays. Some of them have been absolutely great! (Mega Man 9!!!) Some have been total Suckville like this one. While it is fun to return to our childhoods for a brief, short moment, if done wrong, it can smack us across the face and remind us of a time that we sometimes can't go back to.

I would not recommend downloading this game. If Team Sonic is working on Episode III, I'm praying that they fix up the huge flaws from these installments. We'll just see when that game comes out.

Well, that's all for today. Hope to see you around Old School Lane real soon. Thanks for reading. Take care.

-Patricia
Posted by Old School Lane at 9:13 AM