In the early 90's, game shows for kids were hugely popular. While PBS had Where in the World is Carmen Sandiego, Nickelodeon was king of the kids' game shows. However, as we reviewed the previous game shows before, a good majority of them have not aged very well or were just mediocre at best. But that completely changed on September 11, 1993, three men created and released, in my opinion, the best Nickelodeon game show of the 90's. I'm talking about Legends of the Hidden Temple. The game show was about six teams consisting of a boy and a girl doing various obstacles to retrieve an item from a temple to gain prizes. In order to get into the temple, the six teams must battle it out until only one remained. The teams were of the following:

The obstacles were of the following:

The moat. The teams had to cross a shallow swimming pool filled with fog known as the moat in various ways. Whether it was on a raft, swimming, or leaping on large tires, the first four teams to make it first would go on to the next round. The next obstacle was the Steps of Knowledge. The large talking Olmec rock god known as Olmec would tell the legend of the artifact and the teams would have to remember it in order to make it to the next round. After the legend, Olmec would then ask questions about the legend that he just told. If the team knew the answer, they would stomp on the marker in front of the step. If they get it right, they take a step down closer to winning. If they get it wrong, they have to stay on the same spot. The first two teams to make it to the bottom would go on to the next round. The next obstacle were the Temple Games. There are three temple games focusing on the theme of the legend. There were three temple games and each time a team won the first two, they would receive a half pendant. The final temple game was a full pendant. The pendants were used to protect themselves from the Mayan temple guards guarding Olmec's temple and preventing the winning team from retrieving the artifact. Last, but certainly, not least, is the Temple Run. Following the tradition of almost every Nickelodeon game show, they saved the best for last. The winning team would have 3 minutes to go into Olmec's temple and retrieve the artifact before time ran out. Each of the rooms were locked and had to be opened by doing a certain task. Inside the temple were the guards being there for the sole purpose of preventing the team from getting the artifact. Depending on how many pendants they won, whether it was 1, 1 and a half, or 2, they could give a pendant and go on. But if there were no more pendants, they would be taken out of the temple. If they retrieve the artifact, all of the doors would instantly unlock and the temple guards would vanish. If they made it out of the temple with the artifact before time ran out, they would win the prizes.

Throughout the three seasons of the show, the 13 rooms had been changed to increase the challenge of the contestants. There were 15 layouts overall: 9 layouts in Season 1, 5 layouts in Season 2, and 1 layout in Season 3. But the one thing that still remained in all 3 seasons was The Shrine of the Silver Monkey. There were three pieces of the monkey that the kid had to put together. Sometimes, some moronic kid would put the monkey together all wrong and you would be yelling at the TV saying, "Come on! I can do better than that! What's wrong with you? Turn it around! Turn the head around, you idiot!"


Everybody who grew up with this game show always had a favorite team and would brag on who was the best. "The Blue Barracudas were the best!" No, The Silver Snakes were #1!" According to IMDB, it tallied up the scores on which team did the best and worst. Out of the 120 episodes, The Orange Iguanas made it into the most Temple Runs out of all the 6 teams. There was a 17% chance that the Red Jaguars would win a Temple Run. The Silver Snakes and the Green Monkeys were tied on entering and completing the Temple Run, but the Green Monkeys had a slight higher percentage on winning by 33%. The Purple Parrots only made it to the Temple four times and won once. It doesn't matter who was the best or the worst, people still would represent their favorite teams regardless. In fact, you can even buy a replica T-shirt of the six teams for around $15. Go to http://www.templeshirts.com/ and pick up one yourself. It's really cool!

The host of the show was Kirk Fogg. He was a pretty good host; enthusiastic, optimistic, and entertaining for the kids. However, there were a few flubs that he would do on the show from time to time that people refer to as "Foggisms". Nonetheless, he was 1000% better than Phil Moore, that's for sure. But the real star of the show, in my opinion, was Olmec. He had a very deep, serene voice when it came to telling the legends and explaining the rules of the games. He was voiced by Dee Bradley Baker, who most of you guys know as the voices of Klaus from American Dad, the voices of the Storm Troopers from Star Wars: The Clone Wars, Perry the Platapus from Phineas and Ferb, and Appa and Momo from Avatar: The Last Airbender. He also did the announcing voice telling the kids their prizes of the show. This was his very first voice acting role in a series. People still to this day praise him for voicing Olmec.

The show was created by David G. Stanley, Scott A. Stone, and Stephen Brown. Stanley and Stone came together and formed the production company Stone Stanley Entertainment in 1991. Stanley and Stone also did the music for the show crediting to The Music Machine. The show lasted for 3 seasons ending its run in 1995. Stone Stanley Entertainment went and produced other game shows and reality shows in the such as The Man Show, The Mole, Celebrity Mole, and Shop Till You Drop. Dee Baker returned in Shop Till You Drop in 1997 as the announcer.

In 2004, Stanley left the company and the name was changed to Stone & Company Entertainment. They're currently producing the Nickelodeon game show BrainSurge, now called Family BrainSurge. I'll discuss about that game show some other time.

When the show first came out, the critics were amazed by it. They loved the concept of the show with it being creative, unique, and exciting. Feminist author Susan Douglas praised it for being "nonsexist" and "non violent". There were some critics however, such as A.J. Jacobs from Entertainment Weekly, saying that it was an American Gladiators clone mixed with Young Indiana Jones Chronicles. Nonetheless, Legends of the Hidden Temple won the CableACE award for best game show in 1995 and nominated two more times that same year. Overall, as I said, this is my absolute favorite Nickelodeon game show in the 90's and my favorite Nickelodeon game show ever! It's gripping with excitement, intense action, and the coolest concept for a game show that I have ever seen. It still holds up very well to this very day, even slightly better than Double Dare.

Oh come on, I didn't mean it like that. I love Double Dare to death. Don't get me wrong. The minor issue with Double Dare that slightly dated it to me were the pop culture reference based questions. If a kid were to see an old episode of Double Dare today, there's no way he'll know who the members of Kids in the Hall are. With Legends, the questions focus on the legends that took place in the past that seems like it could be asked at any time. Also, anybody who grew up with Legends always wanted to be in Olmec's Temple. They couldn't wait until the final part in the show to see the kids trying to receive the artifact. It was the best part in the whole show that still gets me excited to see it again 20 years later. There were even some moments in which I cried with joy that they won, especially if they really deserved it. 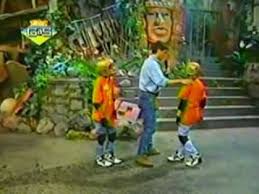 This was the show that combined skill, knowledge, strategy, and bravery all in one. In order for you to succeed in winning the game, you needed all those things plus determination and a strong will to never give up when things seemed dim. It still holds up today and I highly recommend watching this show! You will not be disappointed!

That's all for now. Tune in next time as we conclude 1993 with The Adventures of Pete & Pete. Hope to see you around Old School Lane soon. Thanks for reading.

-Patricia
Posted by Old School Lane at 7:47 AM