As we've been discussing over the past couple of months, Nickelodeon has had made a huge impact on television. The creative programs, the fact that it was a TV network for kids, and the copious amounts of slime made it a huge standout for the past 34 years. As time went on, a few Nickelodeon shows tried to make its way to other networks. Some have been done by the creators. Others haven't. Some have succeeded, most have failed. This week, we're going to take a look at former Nickelodeon shows that had a continuation in another network and compare it to the original. The first one to do so was the game show Celebrity Double Dare. 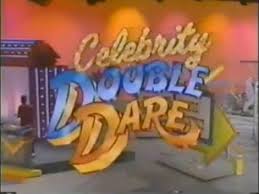 Debuting in 1987, the game show was shown on syndication to try to pick up a more adult crowd based on the popular Nickelodeon kids' game show. It came out a few months after Super Sloppy Double Dare debuted on Nickelodeon where it was double the mess and double the fun. This version had a team of two people: a regular contestant and a celebrity working together to gain enough points to win up to $25,000 worth of prizes. The show was hosted by Olympic gold medalist Bruce Jenner and the rules were pretty much the same: answer a bunch of questions to get money. If they didn't know the answer, they could dare the other team for double the dollars until eventually they would take the physical challenge. But there were a few new additions to the show that no other incarnation of the Nickelodeon Double Dare spinoffs did. First, each question had two answers and each person had to say 1 answer each. If one person got it wrong, they would lose their turn. 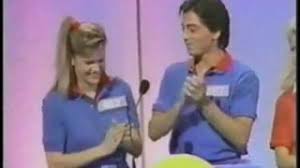 The physical challenges were similar to the original Double Dare in which they weren't as messy. In fact, the first physical challenge involved with the teams eating a long piece of licorice with a marshmellow in the middle. Then came the obstacle course in which they looked smaller, simpler, and less messy. Instead of getting flags, the team had to push 7 buzzers in 90 seconds ending it with one of the contestants in a dunking booth. Celebrity Double Dare had two pilot episodes and never got picked up for a TV series. 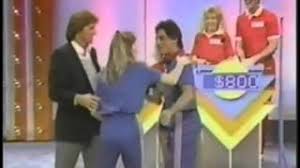 Overall, Celebrity Double Dare is boring. Very, very boring. Everything about it was just bland. The set was boring, the music was boring, Bruce Jenner was boring as a host, the physical challenges were boring, and the obstacle course was boring. It came out around the same time as Super Sloppy Double Dare when the show became hugely popular with its messy games, fun content, and the people who were involved with the show. Nothing really stood out and it played it way too safe. Eventually 3 years later, adults would get a chance to be in Double Dare with Family Double Dare, the most well known adaptation of the game show. That's the way to bring adults into Double Dare. I don't recommend checking Celebrity Double Dare out.

That's all for now. Tune in next time as we go into the 90's with a spinoff pilot of a popular 90's Nickelodeon teen sitcom Clarissa Now.