Around the early 90's, Nickelodeon were in the beginning of their prime of releasing unique shows such as Salute Your Shorts, Are You Afraid of the Dark?, and the three original Nicktoons. But the one show that changed the demographic of shows was none other than Clarissa Explains it All. 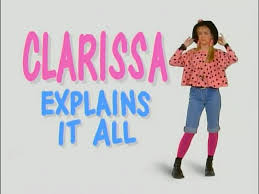 As you recall from my review of Clarissa Explains it All, it was the one of the first shows on TV that featured a female protagonist and showed the everyday life of a teenage girl. The show lasted from 1991-1994 and it was one of the most popular shows on Nickelodeon. Girls related to Clarissa Darling with her discussions of boys, clothes, school, and her weird, annoying family members. But at the same time, boys liked her because of her good looks, liking things such as video games, rock bands such as Pearl Jam and They Might Be Giants, and finding things to relate with her. The final episode of Clarissa Explains it All concludes with Clarissa writing her final newspaper article talking about the future. Many people wondered what was going to happen next for her. Around 1995, CBS debuted a pilot for Clarissa spinoff named Clarissa Now or Clarissa for short. It featured a few times in Nickelodeon during the Big Help-a-Thon in which it took place after Clarissa Explains it All.

The pilot starts with Clarissa talking with the audience about her being in a New York subway going to her first day of work as a assistant journalist. The subway becomes extremely crowded with people and eventually the train stopped and the lights went off. However, Clarissa is still optimistic about her new job and new life. When she arrives in the newspaper office, she gets introduced with a couple of her new co-workers and her boss, editor Hugh Hamilton. She then learns that things aren't as glamorous as she imagined: the co-workers are pretty mean and bitter, her office is small, cramped, and has limited supplies, and she is told to stay away from Hamilton due to being angry due to major burnout. Clarissa, wanting to prove that she's capable of being a great journalist, decides to interview people from around the city and get a story to impress Hamilton. Later on, she meets with Hamilton and shows him her story. Hamilton, not impressed at first, tells Clarissa off of being too young and inexperienced. However, he saw a lot of potential in her and lets her stay in the office. 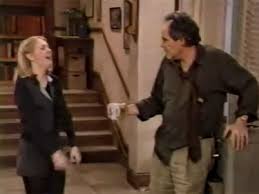 Clarissa Now never got picked up for a TV series and to this day, has been forgotten. Overall, it wasn't too bad. The pilot sort of reminded me of The Mary Tyler Moore Show and Murphy Brown in which it involved with a strong, independent woman trying to get respect in an office setting in a time in which men were the main workforce. It kept the same formula of Clarissa Explains it All, but showed it in a way that was new. There were moments in which the jokes fell flat, but it was still solid. It's such a shame that it never got picked up for a series, but then a lot of teenagers were moving on to other shows such as The Secret World of Alex Mack and more. But then again, if it would've been picked up, then Melissa Joan Hart wouldn't have been in Sabrina the Teenage Witch. At least Mitchell Kriegman is going to try again with telling this story again with the upcoming book Things I Can't Explain which continues the story of Clarissa Darling. To know more info, check out the video below in which I discussed about it and my overall opinion about it.

If you're a fan of Clarissa Explains it All, check out the Clarissa Now pilot sometime.

That's all for now. Tune in next time as we take a look at the continuation of a popular Nicktoon on the Disney Channel with Brand Spankin' New Doug. 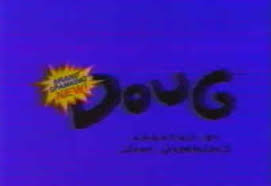