Old School Lane's Nickelodeon Tribute: Tak and the Power of Juju with Mediaman

In our last review, we tackled in Wayside, a cartoon based on a popular children's book series that had little to do with the original source material and was mediocre for the casual crowd. This time around, we're reviewing a cartoon based on a video game series. Movies based on video games are very hit and miss. Cartoons based on video games are even worse. With the exception of Earthworm Jim, Sonic SatAM, Where On Earth is Carmen Sandiego, and Pokemon, most of them don't adapt well with them having awful animation, atrocious writing, and butchering from the original source material. In the end, they are heavily disappointing for fans of the video games and unwatchable for the casual viewers, especially if they are cartoons based on crappy video games such as the Bubsy pilot. Today, we're reviewing Tak and the Power of Juju. Joining me is a Manic Expression member who is very knowledgeable on the Tak series Mediaman. Thank you so much for joining me in this review.

Mediaman: You're very welcome, Patricia. I'm glad to be here.

Patricia: The game revolves around a young shaman's apprentice named Tak (voiced by Jason Marsden) who is tasked to find magical plants to change a warrior named Lok (played by Patrick Warburton) back to normal after being transformed into a sheep by an evil shaman named Tlaloc. The game consist of platforming, solving puzzles, and obtaining Juju powers. I remember playing this game over 10 years ago when my cousin was having trouble with one of the levels. I found it to be pretty mediocre. The controls felt a bit floaty, the levels were pretty generic, the jokes fell flat at times, and the story wasn't anything special. It felt like a huge downgrade to other popular 3D platformers that came out during that time such as Jak and Daxter: The Precursor Legacy, Sly Cooper and the Thievus Raccoonus, and Ratchet and Clank despite the developers claiming it had gotten influences from those games. There were 4 sequels to the game, each ending up having mixed reviews.

Mediaman: It's true the game did suffer from its share of problems, primarily the controls and level design, but what made me keep playing until the end was the decent gameplay and enjoyable characters. The sequal, Tak 2: The Staff of Dreams, was a vast improvement on many of the previous games' problems. It was definitely a game I don't regret purchasing. The third game, The Great Juju Challenge, made up for its difficulty by having a solid story and brilliant chemistry between Jason Marsden and Patrick Warburton. And even though I haven't finished the fourth (Tak and the Guardians of Gross), it still had solid gameplay (say what you will, gameplay was never an issue, in my opinion). All in all, I enjoyed these games and consider them to be worthy titles among the other Nick games. Patricia: With The Adventures of Jimmy Neutron: Boy Genius ending its run a year prior, Nickelodeon decided to do their first animated CGI series in house with Tak and the Power of Juju debuting on August 31, 2007.

The show focuses on Tak (voiced by Hal Sparks) practicing the powers of the Juju and serving as the link between the human realm and the Juju realm after saving them from the Darkness Juju. He mostly hangs around with his best friend Jeera (voiced by Kari Wahlgren) , the chief's youngest daughter, Linda the Sheep, and a laidback guy named Keeko (played by John DiMaggio). Various dangerous situations occur in the village in almost every episode and the warrior Lok (reprised by Patrick Warburton) has to save them. However, his incompetence makes things worse and it's up to Tak and the Jujus to help them out.

Another difference was the voice actors. Almost every voice actor, with the exception of Patrick Warburton as Lok and Rob Paulsen as the Party Juju, were completely replaced from the video games to the TV show. But they would use these actors later on in Tak and the Guardians of Gross. The final difference is removing some characters from the games when brought into the show. Tlaloc's minions Pins and Needles and a few of the Jujus don't appear in the show. 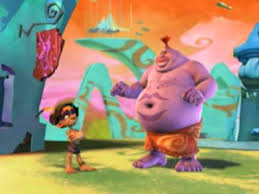 Mediaman: So, before you even watch the show, you'll notice the flaws in it. First, Jason Marsden didn't reprise his role as Tak. I never understood that. Did Jason simply get tired of playing the character, or did the producers just forget about him? Either way, it should've tipped us off that this cartoon was going to be a stinker.

And that, by far, is what sealed the deal for me. Not only did they promptly forget about some of my favorite Jujus, but they also changed Tlaloc from an evil sorcerer to a show-boating con man. Man, what were they thinking?

Patricia- The show struggled when it debuted due to not gaining a wide audience to see it and the harsh, negative reviews that critics and viewers gave it. Eventually, the show was cancelled on November 29, 2008. If you remember from video game history, 2007 is considered to be one of the greatest years of video games ever. That year brought us such beloved games such as Super Mario Galaxy, Metroid Prime 3, God of War II, Guitar Hero 2, Bioshock, and Call of Duty 4: Modern Warfare. With Tak: The Great Juju Challenge, the third game in the series, coming out back in 2005 and not having a new game in the series until 2008 with Tak and the Guardians of Gross, the series were forgotten rather quickly with other better platformers and other fantastic games that debuted around the same time as the TV series.
Due to the major changes from the games to the show, it irritated fans of the games when watching the TV series.

As a standalone show, it's one of the worst Nicktoons that ever debuted. It's incredibly boring with outdated animation, bland characters, and forgettable episodes. When watching episodes of Tak and the Power of Juju, I immediately forgotten everything that I saw minutes after seeing them. There's nothing about this show that draws me back into it. I didn't care about the games and I cared even less about the TV series. For fans of the series or in video games, you'll be very disappointed in this adaptation. As for a casual audience, you're better off watching Avatar: The Last Airbender.

Mediaman: Indeed. Watch Avatar, watch Spongebob, watch anything but this crudfest. In fact, you could try finding a copy of the game yourself (at your local dollar store or bargin bin or whatever they call it) and decide whether or not it's good.

Patricia: That concludes our review of Tak and the Power of Juju. Mediaman, thanks again for this crossover review. Your knowledge was very helpful and appreciated.

Mediaman: You're very welcome, Patricia. I'm glad to help out with your blogging. Now, I must return to my own works. So long!

-Patricia and Mediaman
Posted by Old School Lane at 4:23 PM