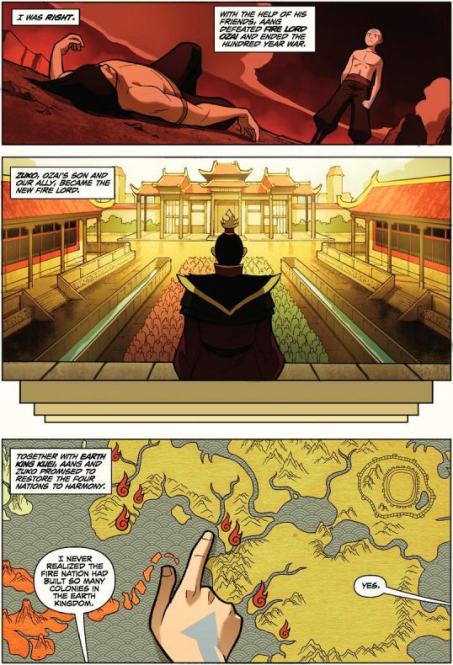 The introduction takes place immediately after the War. Aang, Zuko, and King Kuei, the Earth King from Ba Sing Se, creates a new movement called the Harmony Restoration Movement to remove all of the Fire Nation colonies from the Earth Kingdom and try to reunite them in a peaceful manner.

Everything goes well until one year later when an assassination attempt for Zuko’s life occurs. The assassination does not go well as Zuko captured and imprison the assassin. The assassin turned out to be a female Earthbender named Kori who was the daughter of the mayor of Yu Dao, the oldest Fire Nation colony in the Earth Kingdom.  Kori complained to Zuko that the Harmony Restoration Movement had ruined her life since that meant that her parents are no longer in charge of Yu Dao. Zuko agreed to let her go and confront her parents to explain that the movement will help them, not hurt them.

Meanwhile, Toph has opened a new academy dedicated to teaching Earthbenders how to Metalbend, Aang is trying to create balance to the citizens of the Fire Nation and former colonies of the Earth Kingdom, and Katara and Aang’s relationship became to increase into a loving one. In the end, Zuko approaches his father’s prison cell and asks him “for advice”. Overall, the story was a great continuation of the series and shows some new characters and plot points leading up to Avatar: The Legend of Korra. There are some things, such as the location of Zuko’s mother, that hasn’t been revealed yet, but I have a feeling that it will be revealed in the later books. If you’re a fan of the series and need your Avatar fix before the new series, I cannot recommend any higher to check out the book. Tune in around May for the next book in the trilogy.

Until then, catch you guys later. Thanks for chilling out with us at the Old School Lane.

-Patricia
Posted by Old School Lane at 9:04 AM

Email ThisBlogThis!Share to TwitterShare to FacebookShare to Pinterest
Labels: Avatar: The Last Airbender, Avatar: The Legend of Korra, Book Review, The Promise