As mentioned in my previous First Impressions on The Last of Us, I am a huge fan of Naughty Dog and their games. Out of their three video game series, that being Crash Bandicoot, Jak and Daxter, and Uncharted, the Jak and Daxter series is my absolute favorite. When I first got the PS2 back in 2003, I had gotten the PS2 pack which had two of their Greatest Games packaged with the console. Those games were Jak and Daxter: The Precursor Legacy and Ratchet and Clank. I had played both of those games and loved them. Over the years, I had purchased Jak II, Jak 3, and Jak X: Combat Racing, and had spent many hours immersed with the characters, storyline, gameplay, and more. 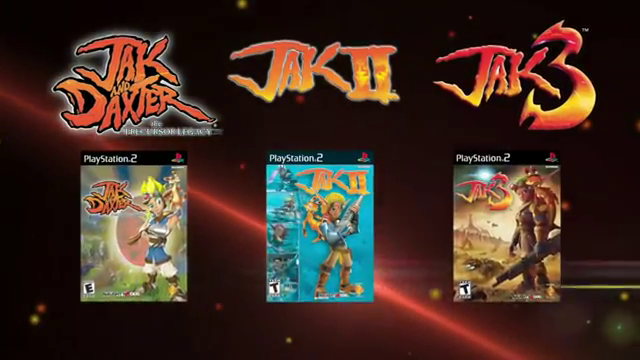 So, as of today, I had taken a few minutes to play all three games and now I’m going to give my video game review on the collection. Has the series held up well after 10 years later to be purchased or has it become so dated that you shouldn’t bother with it? Well, here we go.

When I first saw the Jak and Daxter series back on the PS2, the graphics were absolutely amazing. I loved the bright, lush, and green jungles in Jak and Daxter: The Precursor Legacy, the dark atmosphere from Haven City in Jak II, and the huge deserts in Jak 3. When looking back at the games again, the graphics has gotten a bit dated, especially Jak and Daxter: The Precursor Legacy. Over the years, we have come a long way from graphics with today’s looking more realistic, especially since Naughty Dog pushed it to the limits with the Uncharted games. However, with the sequels, they look much more improved and they look a lot more sharper and cleaner thanks to the 720 HD visuals. All three games are just as much fun as they were 10 years ago. With The Precursor Legacy, you’ll be spending a lot of time exploring a non-linear world collecting Power Cells, Precursor Orbs, and Scout Flies, obtaining different colored Ecos and doing unique abilities such as run faster and gaining extra strength, fighting large bosses, riding a Zoomer to complete tasks, and so much more. It’s such a shame that you don’t see a lot of these platforming games anymore.

With Jak II, they made a huge change with the series changing the gameplay to focus more on sandbox gaming and third-person shooting than platforming and collecting items. Not only that, but you can also steal Zoomers and drive them around, have races, ride a Jetboard and pull off some neat tricks, killing Metal Heads and collecting their Skull Jems, and obtain a new ability that can make Jak turn into a darker version of himself. With the popularity of Grand Theft Auto III at the time, Naughty Dog took a huge risk in making Jak II more darker and more serious than its predecessor. Playing Jak II again made me remember how difficult and frustrating some of the missions are, although they aren’t as bad as I did it the first time. But for those who are playing this game for the first time may give up a few times along the way. With Jak 3’s gameplay, it’s pretty much the same as Jak II’s, but the gameplay has gotten more refined and less difficult than the last game. Also it taking place in a different city with new tasks and new areas to explore. Also there are new things to do such as more racing, arcade shooting range, hunting different Metal Heads, exploring the desert, and so much more. It also introduces a lighter version of Jak with the ability to heal himself, slow down time, create a barrier, and fly for a short period of time. There’s also new abilities for Dark Jak and 8 more weapons to unlock.

Similar to other PS3 collections, there are trophies to be earned for every task completed. Other than that, there’s really no reason to play the games a second time besides getting 100% on the collectibles and playing some of the mini games. It’s such a shame that there are no new levels, mini games, or even DLC.

Overall, after 10 years later, the trilogy still holds up very well with its amazing story line, fun and unique game play, and intriguing characters. Sure, some of the graphics and game play from The Precursor Legacy are a bit dated, the later levels of Jak II are very difficult, and there are no extra features to make you want to go back, but this is definitely worth spending $40 dollars on Naughty Dog’s earlier games. Hopefully, we can get more people to remember the Jak and Daxter series as one of Naughty Dog’s greatest game series as much as Uncharted. Check it out.