On September 26, 2011, Konami 's adventure game Castlevania celebrated its 25th anniversary. The stories involving Simon Belmont taking down the vampire Dracula has captivated many hours of dedication of my childhood and teen hood going through many hours trying to go through the frustrating levels and bosses. However, everytime I passed a stage, I had a moment of satisfaction and kept playing. On that day, I played a couple of levels of the Castlevania, as well as Super Castlevania IV on the SNES, Castlevania: Symphony of the Night on the PS1, and the recent Castlevania: Lords of Shadow on the PS3. I'm sure that everyone did the same thing when they celebrated its anniversary. Oh wait, another important video game was celebrating its 25th anniversary last year that everyone paid attention more than Castlevania, didn't they? What game was it again?

Oh yeah, Zelda. Don't get me wrong, I love Zelda, but it overshadowed a bunch of other games that were celebrating their anniversary that deserved as much attention. But not today, Old School Lane is going to celebrate a game that is still loved by retro gamers, massicists, and shoot-em-up fans.

On February 20, 1987, Konami released Contra on the arcades in Japan. The basic story of the futuristic year of 2633 in which two commandos named Bill "Mad Dog" Rizer and Lance "Scorpion" Bean are sent on a mission to neutralize a terrorist group called the Red Falcon Organization that is planning to take over the Earth. With over 4 different gun power-ups to pick up along the way, over 10 levels of run and gun shooting action, and co-op play, this arcade game was very popular. So Konami decided to release the game in other video game consoles and home PC computers, but the one that people know about the most is the NES port of Contra that was released on February 2, 1988 in America. Japan would receive it a week later and Europe wouldn't get it until almost 2 years later.

The story is pretty much the same as compared to the arcade, with only a few slight differences. Instead of the game taking place near an archipelago in New Zealand, it takes place in an unknown island near South America. Also, instead of the Red Falcon being a terrorist group, they were the name of an alien entity. The aliens were reminising of the ones designed by H.R. Giger for the Alien movies. In this picture, you can see that they kind of look like the Facehuggers from Alien. But what everyone remembers about Contra the most is the Konami code. For those who don't know it, you're either not a retro gamer, a Konami fan, or a hardcore gamer. Here's the code right here:

Most people think that the code originated in Contra, but it actually came from Gradius, a scrolling shooter game that was also made by Konami. The code gives you 30 lives instead of 3 lives and trust me, you're going to need it when playing this game. It's one of the most difficult games that ever came out on the NES, but not as hard as Ninja Gaiden or Battletoads. At least I beat Contra, which was not easy, even with the code. Remember this boss? Yeah, frustrating as hell, wasn't it?

Another thing that makes this game memorable are the weapons. All 4 gun power-ups from the arcade were brought to the home ports. You have the machine gun, the laser gun, the fire gun, and of course, the spread gun. The spread gun is the stuff of legends. It's the most powerful gun in the game as it spreads the bullets everywhere and makes killing enemies easier and faster. It has been called one of the best power-ups in video game history and has been in every Contra game ever since. The spread gun is so popular to gamers that the logo has been put on t-shirts, tattoos, and other merchandise.

But what has made this game so great is its co-op play. During the time when NES games were limited to one player or the second player had to play after the first player dies. Playing this game makes it more easier and fun with a friend, unless that person sucks.

Critics and gamers loved Contra, calling it one of the best multiplayer games on the NES and the #7 greatest game on the NES by Nintendo Power. Still to this day, Contra has been loved and remembered as one of the greatest games to ever came out on the NES. The Contra series has had many sequels and spinoffs over the years, some better than others. My favorites in the series are Contra, Super C, Contra III, Contra: Shattered Soldier, and Contra 4. What are your favorite games in the series? Post it in the comments below and talk about your favorite memories of playing Contra. 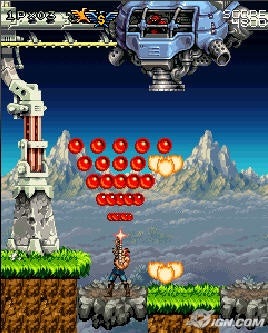 Until then, celebrate Presidents Day with two shirtless commandoes taking down terrorists or aliens with awesome, overpowered guns. Happy 25th anniversary, Contra. May you have many more difficult, yet fun games in the future
.

Thanks for hanging out with us at Old School Lane. Catch you guys later.

-Patricia
Posted by Old School Lane at 11:15 AM