What happens when you combine Thanksgiving with Kenan & Kel? A hilarious Thanksgiving special. It's Thanksgiving at the Rockmore house and Kel gets into trouble once again by eating the family turkey. Kenan and Kel go through crazy scenarios trying to cover up this huge mess. They try to cover it with turkey slices and mashed potatoes, they order new turkeys, one cooked, but two live ones, and they try to stall Kenan's grandparents into not thinking about the dinner despite them being really hungry. Once again, Kenan & Kel shows us hilarity and great jokes in this funny Thanksgiving special. It's, in my opinion, the best live action Nickelodeon special!

4. The Turkey Who Came to Dinner from Rugrats

It took a while, but Rugrats finally released their first and only Thanksgiving special in 1997. Grandpa Lou failed to buy a turkey for the family. All of a sudden, the babies happen to see a live turkey running around their backyard. The babies try to make friends with the turkey not knowing that the reason why its important is because the grown ups want to eat him. As time goes on, they figure it out and try to hide the turkey away from the grown ups. It's a very cute special that ends in a happy note. 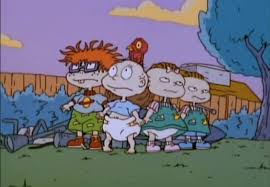 Rocko's Modern Life was the first Nicktoon that had a Thanksgiving special in 1993 and it would hold that position until 1997. In this special, everyone is excited to have a delicious Thanksgiving feast, especially Ed Bighead. He has a real live turkey that he's fattening up and waiting until the day arrives. The turkey runs away and heads over to Rocko's house since Rocko's eating a vegetarian tofu turkey and he feels safe there. Rocko tries to hide him and it starts off well until every live turkey in O-Town goes to his house. It's a really nice special since it goes to show you that Thanksgiving is not just about a feast consisting of eating turkeys, it's about being surrounded by family and friends and being thankful with what you have.

2. Ten Chairs from As Told by Ginger

Not a lot of people have seen As Told by Ginger's Thanksgiving special. As I mentioned in my review of As Told by Ginger, the show went through many schedule changes and eventually went over to the Nicktoons Network. It's the most recent Thanksgiving special in my list debuting in the year 2009 and it's a really good one. Ginger, Carl, Lois, and Dr. Dave are planning a very special Thanksgiving party inviting the Bishops and Dr. Dave's mother. Ginger decides to include another surprise guest: her father. Carl is upset about it since his relationship with his father is still a bit bitter due to him leaving the family and Lois doesn't know about it. Meanwhile Carl and Hoodsey buy a live turkey so they can free it. What happens is a huge disaster to the Thanksgiving feast. This is a very well done, down to earth Thanksgiving special. It tugs in your heart strings and makes you feel good at the end. It makes you appreciate your family, whether you like them or not. Check it out sometime! 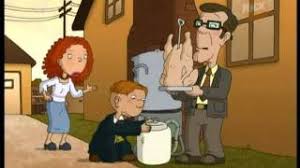 Predictable, I know. But I couldn't help it. It's so down to earth and funny at the same time. It goes to show you how true Thanksgiving is. Arnold wishes to have the perfect Thanksgiving, but his unorthodox grandmother confuses it for the 4th of July and they celebrate it with dressing up as the founding fathers cooking hot dogs outside in the cold. Arnold leaves his family and wanders alone. Meanwhile Helga isn't happy with her Thanksgiving due to Olga being the center of attention, Miriam busy cooking the food, and Big Bob watching football. When the dinner is ready, Helga tells her family that she's thankful for nothing and leaves the house. Arnold and Helga walk around seeing who has the perfect Thanksgiving and nobody is, even Mr. Simmons with his crazy family.

In the end it goes to show you that Thanksgiving isn't perfect sometimes. The most important things to remember is to be thankful with what you have even if it's not what you want in life. However, it's what we have and we should make the best of it. Eventually we're happy that we do have it because once it's gone, it's gone forever. We should appreciate what we have and give lots of love to our family and friends.