On the same day that Ned's Declassified School Survival Guide debuted, another TeenNick sitcom debuted with the demographic focusing on teenage girls. The show was none other than Unfabulous which aired on September 12, 2004. 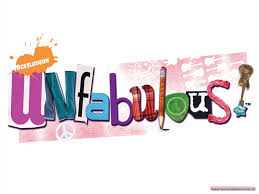 The show was about a teenage girl named Addie Singer (played by Emma Roberts) who is a regular everyday girl that spends most of her time writing and singing songs about going through middle school. She hangs out with her best friends Geena Fabiano (played by Malese Jow) and Zack Carter-Schwartz (played by Jordan Calloway). Geena is a teenage girl who loves fashion, shopping, and clothes and Zack is obsessed with basketball. Throughout the series, Addie narrates about her life in school, homelife, hanging out with her friends at a Jamba Juice-like store called Juice! where her older brother Ben (played by Tadhg Kelly) works at, and writing songs. She has a crush on a boy named Jake Behari (played by Raja Fenske) whom she dreams of dating, but doesn't tell him her feelings since he already has a girlfriend. Addie continues writing songs about her life and going through her time as a teenage girl. The show was created by Sue Rose, who also created Pepper Ann and Angela Anaconda. Rose's style of telling stories about teenage life starring female protagonists, stereotypical archetypes, and down-to-earth situations. Each of Rose's shows had a theme that would represent each show. For Unfabulous' case, it was music. On September 25, 2005, there was an album released named Unfabulous and More that featured songs from the show. The album had reached #45 on the Billboard's Top Heatseekers.

The show lasted for 3 seasons until it ended on December 16, 2007. The actors went on to do other projects. Malese Jow is a singer and has been involved in movies and TV shows such as Wizards of Waverly Place, The Secret Life of the American Teenager, Leverage, The Social Network, The Vampire Diaries, The Troop, and Big Time Rush. Jordan Calloway has been in TV shows and movies such as ER, DISconnected, and The Glades.


Overall, I found the show to be not bad, but a bit generic. While it's much better than Angela Anaconda, Unfabulous had stereotypical characters that weren't standouts and the stories were pretty predictable. However, some of the actors did a good job performing their characters, especially Emma Roberts. Also some of the songs in the show weren't too bad since they were all written by Jill Sobule. One of the major problems with shows that focused on marketable project placement like the music and a lot less on the characters and stories, it comes across a bit forgettable similar to Romeo! and the other shows that we will be discussing about later on throughout the tribute. If a show like Unfabulous interests you, you can check it out. However the premise is pretty much the norm for every teen sitcom out right now such as Austin & Ally, Big Time Rush, etc. so watching Unfabulous is nothing special. It's just your typical teen sitcom with music and everyday teen problems.

That's all for now. Tune in next time as we conclude 2004 with the next Nickelodeon movie Lemony Snicket's A Series of Unfortunate Events.