To conclude 2004, we review another Nickelodeon movie. While the majority of the Nickelodeon movies made a decent amount of money, most of them have not been critically acclaimed with the exception of the first two Rugrats movies and The Wild Thornberrys. Similar to when Nickelodeon released Clockstoppers to get into the craze of Spy Kids, the next live action movie would try to get into the fantasy genre. With the major successes of the Harry Potter series, The Lord of the Rings trilogy, and the Narnia series becoming acclaimed movies making millions of dollars, Nickelodeon Movies tried to do the same time with making a movie based on a book series. The book series they chose was the fantasy series A Series of Unfortunate Events written by Lemony Snicket.

The stories were about three children with special gifts named Claus, Violet, and Sunny Bauderlaire who move in with their relative, an evil count named Olaf, after their parents died. Olaf adopted them just to steal their inheritance. Working together, they traveled to various places and stayed with numerous people only with unfortunate things happening. Nickelodeon Movies had bought the rights to Lemony Snicket's books in 2000 to make it into a movie series. Over the years, there were problems with budget and script rewrites. Eventually, the movie came out on December 17, 2004. Does Nickelodeon Movies finally make a critically acclaimed movie or did they fall on the short end of a popular phase in fantasy movies? This is Lemony Snicket's A Series of Unfortunate Events. The movie starts with a narration by Jude Law talking about three children named Claus Bauderlaire (played by Liam Aiken), and his sisters Violet (played by Emily Browning), and Sunny (played by twins Kara and Shelly Hoffman) moving in with a relative after their parents died in a mysterious fire. They first meet up with their new caretaker, a man named Count Olaf (played by Jim Carrey). The first few minutes in entering the house, Count Olaf reveals to the kids that he doesn't like them and is only using them so that when Violet turns 18, he'll steal their family's fortune. As time went on, the children try to scheme on how they can be able to prevent Olaf from stealing the inheritance. One day when Olaf is driving, he gets the car stuck in a railroad track while the train is coming. The children found a way to escape while the train hit the car with Olaf in it. 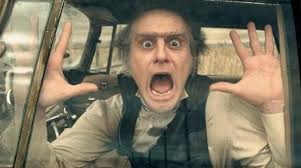 Later on, the kids and Olaf end up in court with Olaf and the judge sentenced the kids to live with another relative. They ended up living with their uncle Montgomery Montgomery (played by Billy Connelly) in Peru. While living in happiness, a mysterious man named Mr. Stephano visits the house. The next day, they found Uncle Monty dead by a poisonous viper. However, Sunny finds out that the viper is very friendly and harmless and Claus and Violet claimed that Mr. Stephano did it. Mr. Stephano is none other than Count Olaf in a disguise and he disappears as soon as he was framed for murder. The next house they end up is in their aunt Josephine's (played by Meryl Streep) house in Lake Lacrymose. While settling down, the kids find pictures and newspaper and find out more about the fire that killed their parents. All of a sudden, a mysterious man named Captain Sham entered the house and offers them a ride on his ship. All of a sudden, a huge hurricane appeared and Captain Sham rescues the kids while leaving Aunt Josephine to die. It turns out that Captain Sham was Count Olaf once again and he gains the custody of them once again. 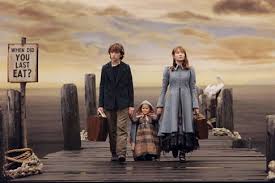 The final plan that Olaf tries to get the inheritance is performing a play involving him and Violet getting married on stage with a legal minister doing the wedding ceremony. It's up to Claus to try to rescue her before it's too late. While reading, he conducts a plan that involves with climbing in a tower and using the same item that Olaf used to start the fire that killed their parents to burn down the stage. The movie concludes with Olaf sentenced to suffer the same unfortunate events that the kids went through, followed up with life in prison. Eventually, Olaf escaped and disappeared without a trace. The kids then went back to their old mansion and finding a note written by their parents with a message of hope. In the end, they lived with another relative and had fortunate events. 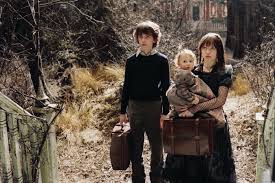 When the movie first came out, it made $209 million dollars, taking the spot as the highest grossing Nickelodeon movie ever. However, it received mixed reviews. There were plans for a sequel to be released in 2008, but lack of interest with fantasy movies and the kids growing too old for their parts delayed the movie even more. There were talks of the sequel being stop motion, but as of now, there is no sequel coming out.

As for me, it's a mixed bag. While I did like some things about it, I didn't like some things about it. I loved the actors who portrayed Klaus, Violet, and Sunny, but I hated Jim Carrey as Count Olaf. The Count Olaf in the books was dark, sinister, and mean while Count Olaf in the movie was...goofy and over-the-top. They really should have casted someone else as Count Olaf because all I saw was Jim Carrey portraying as a goofy villain. Also the sets and music was pretty decent. It felt like watching a lighthearted Tim Burton movie. In fact, the movie's production designer Rick Heindricks, costume designer Colleen Atwood, and cinematographer Emmanuel Lubezki were all involved in previous Tim Burton movies. While it may distract some people calling the movie a Tim Burton knockoff, I liked the designs and were one of the main highlights of the movie. The story was a bit uneven and the pace was unbalanced with some of it going too slow and others going too quickly. Some of the side characters weren't developed well and some scenes could have had a bit of cutting off to make the pace more even. Overall, while it's not a bad movie, there are so many other better ones to check out such as The Lord of the Rings movies and the Harry Potter movies. I would recommend those than watching this.