2006 on Nickelodeon continues with another movie review. The 2nd movie to feature for Nickelodeon Movies was Barnyard. Barnyard was written, produced, and directed by Steve Oedekerk. Steve Oedekerk previously founded O Entertainment, the same production company that released The Adventures of Jimmy Neutron: Boy Genius with him being the executive producer of the show. A few months before The Adventures of Jimmy Neutron: Boy Genius ended, Barnyard debuted in theaters on August 4, 2006. Does the movie bring in good crops or has it dried out? This is Barnyard. The movie begins early in the morning with a farmer checking on his animals. Having to do his morning routines, he gets into his car and leaves. When the farmer is gone, the animals get up on two legs talking and gathering together for a meeting led by a male cow named Ben. Meanwhile, Ben's son Otis and his friends Pig the pig, Pip the mouse, Freddy the weasel, and Peck the rooster goof up riding on a ironboard with two large icecubes on a large hill. While riding, they hit the top of an oil rig and a chicken coop and make it to the barnyard where the meeting was taking place covered with oil and feathers. While the meeting was going on, Ben warns the farm animals about coyotes wandering in different farms stealing chickens and staying away from human technology, Otis' cell phone rings interrupting the conversation. The meeting ends with Ben approaching Otis to grow up from his wild antics and learn to be a man. However, Otis shrugs Ben's advise and immediately falls in love with a pregnant cow named Daisy who had just moved into the barn alongside her friend Bessie. He stumbles on discussing a conversation with her being a bit awkward. Daisy tells Otis to go away since she's not interested in her. We then cut to a montage of Otis doing human activities such as playing golf and making fun of the mailman without him knowing.

That night, the barn has a huge party while the farmer's asleep involving with singing, dancing, playing pool, playing cards, and riding on a mechanical man. Otis wants to join in on the party, but he's forced by Ben to watch over the fence to prevent coyotes led by Dag from entering. Ben tells Otis about the day that he found him on the barn and learning to become a leader for the barnyard. Otis wasn't interested in being a leader just like him and leaves Ben disappointed. Later on, the coyotes sneak into their barnyard and almost steal the chickens, but Ben makes it on time to fight them. Ben defeats them, but lost his life in the process. With that, Otis is proclaimed as the new leader of the barn. The animals use Otis as an excuse to party all night long. He decides to give the position of watching over the chicken coop to Peck and Freddy, which is difficult since Freddy has a craving to eat the chickens. Otis hangs out with a group of cows known as the Jersey cows, whom Ben originally didn't want Otis to be around with. While hanging around, a group of young boys led by a fat kid named Snotty Boy decide to go cow tipping. Otis and the Jersey cows decide to have revenge on Snotty Boy by tipping them over. Later that night, Otis and the Jersey cows sneak into their next door neighbor's garage to steal their car. Mrs. Beady saw the cows stealing the car and warns her husband about it, but assumes that she's making things up. The cows drive up to Snotty Boy's house and sneak up to his room and tip him off of his bed. Snotty Boy screams and the cows get away driving. They celebrate until a cop car goes behind them. They act like real cows and get away from trouble. 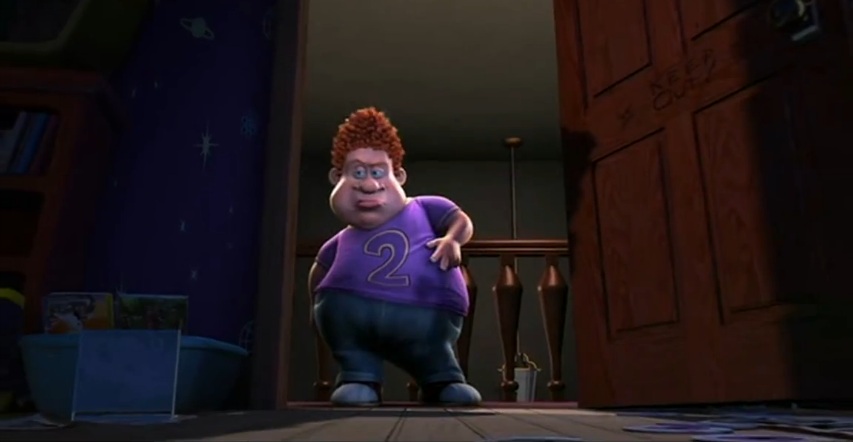 When Otis returns home from the barn, he sees Daisy sitting alone. Otis approaches her and talks to her about himself while Daisy talks about life before she came over to their barn. Apparently, she was living a normal, happy life with her husband cow until one day a huge tornado hit their farm killing all the animals, except for her and Bessie. While they talk, Otis overhears Dag and the coyotes chasing a rabbit and heading towards the barn. Otis leaves Bessie and heads towards the coyotes to take them down to avenge his father. He meets up with Dag and tells them to leave the barn or else, but Dag laughs and orders his coyotes to attack him. With Otis injured and defeated, Dag threatens Otis that he doesn't let them take one animal a night, he'll come by and kill all of them. Otis, disappointed about his loss, decides to leave the barn. Daisy sees Otis packing his things and is concerned about what happened the night before and Otis confesses his problem involving with the coyotes and not feeling like a competent leader. Daisy tells him that Otis doesn't have to be brave to be a leader, he has to stick with his friends. Otis thanks Daisy, but leaves anyway. While he leaves, he learns that one of his friends Maddy, a baby chick, was kidnapped by the coyotes. Otis decides to face the coyotes to retrieve Maddy back. Otis heads over to the junkyard, where the coyotes live, to take down Dag. Dag laughs and sends his coyotes to take him down again and Otis is defeated. But luckily, his friends consisting of Pig, Freddy, Peck, Pip, the Jersey cows, and others help him out. Working together, they defeat the coyotes and Otis defeats Dag by hitting him far away with a golf club. The movie concludes with Otis and the animals finding out that Daisy is about to give birth so they use motorcycles to get back home. They arrive just in time with Daisy giving birth to a baby calf whom she named Little Ben. Otis promises to take of Daisy, Little Ben, and the barn and heading outside to see the stars.

When the film first came out, it received negative reviews by critics and viewers despite being a huge commercial success of making over $116 million dollars. In my opinion, this movie is mediocrity at its finest. It has a terrible, predictable storyline with bland characters, outdated animation, and horrible jokes. However, around the end of the film started to get interesting with the last fight with Otis and Dag, the struggle with being a competent leader just like his father, and the back stories of Otis and Daisy. If the movie would've had a tighter script, more dimensional characters, and similar to the drama that appears towards the end, it would've been a lot more decent. Maybe not as comparable to a Pixar or Dreamworks movie, but something more better than the movie we ended up with. I don't recommend checking it out.