The year is 2006. Brokeback Mountain, Cars, Borat, and Snakes on a Plane debuted in theaters. Ben 10, Psych, Ugly Betty, and Hannah Montana debuted on TV. 2006 for Nickelodeon was the beginning of its low point for the network. There were no new Nicktoons and live action shows that debuted and game shows were pretty much dead when Nickelodeon Studios shut down a year prior. With the exception of one preschool show and one show consisting of puppets, the remaining reviews from Nickelodeon will consist of 3 Nickelodeon movie reviews. The first one that came out in theaters was Nacho Libre which debuted on June 16, 2006.

The movie is loosely based on the real life of Reverend Sergio Gutierrez Benitez, a reckless man obsessed with alcohol turned Mexican Roman Catholic priest who disguised himself as a Mexican luchador so he can be able to support the orphaned children. From 1973 to 2011, Rev. Benitez went by the luchador name of Fray Tormenta (Friar Storm) and competed in many wrestling matches sporadically. Nowadays he's retired from wrestling and is still a priest at the orphanage while another young man going by the name of Fray Tormenta Jr. continues the legacy. Many forms of entertainment was inspired by Fray Tormenta, specifically video game characters such as King from Tekken, Tizoc from Fatal Fury, Leon from F-Zero, and Greco from Chrono Cross.

With the success of Jared and Jerusha Hess writing and directing Napoleon Dynamite, they were brought in by Paramount to write and direct a film based on Fray Tormenta. Jack Black, who was becoming a popular comedic actor around the 2000's with films such as Shallow Hal, Orange County, and School of Rock, was brought in to play as the main roll and with that. Does the film deserve the championship belt or should they throw in the towel? This is Nacho Libre.

The movie begins with Ignacio, an orphan boy in Mexico, who dreams of being a luchador. However, the other friars deny him of this saying that the Lord forbids wrestling. With that, he trains as a cook using limited amount of ingredients and spices and makes a bland bean soup with tortilla chips. Years later, Ignacio grows up serving the orphan boys the soup with chips telling them that despite the food tasting terrible, they should be thankful that they have it in the first place. Ignacio feels like he never got any respect due to a superior friar mistreating him and calling him worthless. One day, a nun named Sister Encarnacion moves into the orphanage to teach the kids. Ignacio falls immediately in love with her and wishes to talk to her, however the superior friar tells him to go into town to pray for a man sick with pneumonia. Thinking the man is dead, he gives a eulogy in front of his wife while the man wakes up. Ignacio then picks up the tortilla chips for the orphanage when a dirty, homeless man steals the chips and runs away. 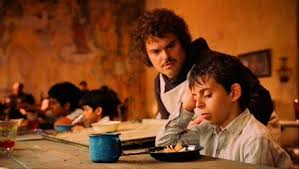 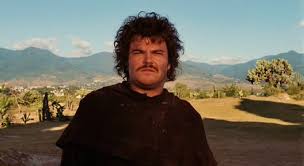 Feeling discouraged with lack of money to feed good food at the orphanage, Ignacio decides to become a luchador to get money winning fights. He finds the dirty, homeless man who stole the chips earlier and fights him for revenge. Afterwards, Ignacio asks him to be his luchador partner, but he refuses. He then convinces him that if they win, they would receive 10,000 pesos. The homeless man, whose name was Steven, accepts Ignacio's offer. That night, they disguise themselves and call themselves Nacho and Esqueleto to keep their identities secret. Unfortunately, they lost the fight, but they receive a little bit of money for participating in the fights. The money that Ignacio earned is used to buy better ingredients for the orphanage. No one knows about Ignacio being a luchador with the exception of a chubby orphan boy named Chancho. Chancho and the other boys watch the luchador matches on TV secretly from the friars knowing and as time passes, Chancho dresses up as a luchador and wrestles the other boys. Sister Encarnacion stops the boys from fighting while Ignacio rushes in and tells them that wrestling is wrong despite Chancho knowing of Ignacio's secret. 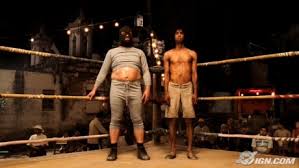 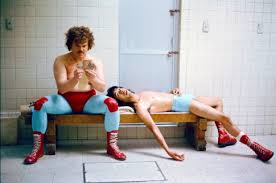 As time goes on, Ignacio and Steven continue to lose luchador fights and wonder how they can start winning so they can be able to make bigger funds for their goals. Ignacio heads over to a gypsy named Emperor to give him advice on how to win more fights. Emperor tells him to climb a mountain and retrieve an eagle egg and eat it. With that, he would gain enormous power. Ignacio struggles with his task, but was able to accomplish it. Afterwords, they try their "new" power, but they still lose fights. So they decide to get advice from Ramses, the champion luchador, by sneaking into his party. It doesn't succeed very well with Ramses refusing to give Steven advice with his manager saying that the championship luchador tournament called the Battle Jam coming up will have Ramses win. With that, Ignacio and Steven decide to compete in the tournament without Ramses' help. They win most of the battles, but end up losing to a strong luchador named Silencio. Things turn for the worst when Ignacio's robes went on fire during praying and reveal his luchador outfit. The friars are shocked to see that Ignacio had been wrestling and order him out of the orphanage. Ignacio leaves telling them that the money he would win would go to the orphanage so that he can take them on trips. With that, he heads to the wilderness. Steven finds Ignacio at the wilderness telling him that Silencio can't fight Ramses due to an injury so Ignacio has a chance to fight him for the prize money. With that, Ignacio has the determination to fight once again. That night, Steven gives Sister Encarnacion a letter from Ignacio telling her that he is still alive and fighting at the tournament telling her to see him fight despite her not liking wresting. Also she confesses his love for her as a brother of God since they took an oath of celibacy when joining the church. We then cut to the fight where Nacho and Ramses fight for the tournament championship with Nacho winning so far until Ramses cheated the fight and unmasks Nacho. With Nacho unmasked and feeling discouraged, he looks up and sees Sister Encarnacion and the orphans cheering him on. Nacho then has a flashback of the eagle that he saw earlier remembering when he ate the eagle egg and it gives him the strength to fight again and defeat Ramses and win the tournament. 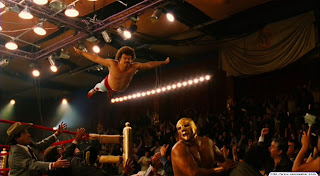 The movie concludes with Ignacio using the prize money to buy a bus to take the orphans on trips and Ignacio and Sister Encarnacion smiling and acknowledging each other.

When the movie first came out, it came in second place in the box office with Cars leading it. It was a commercial success making $99 million dollars overall despite mixed reviews with critics and viewers. As for me, while there are a few things that make it entertaining, there are too many flaws in this movie that weigh this movie down. First off is Jack Black himself. His Spanish accent is terrible with it sounding Italian a few times and he acts too much like Jack Black and not enough like the character he's suppose to portray as. Also the way that Steven is portrayed seems rushed and convenient to the plot when in the beginning of the movie he didn't believe in God and hated orphans with him quickly baptized by Ignacio and the plot progression make him change his mind. I wish that we would have gotten a little bit of more development with Steven other than just being Ignacio's luchador sidekick. I can also say the same about the other characters in the movie. They seem really tacked in with little to no development. The orphans, with the exception of Chancho, are barely see, the superior friar gets no screen time after Ignacio is revealed to be Nacho, and there's no backstory of our main villain Ramses other than being an obstacle that Ignacio needs to achieve in order for him to win the prize money. The scene in which Ramses removed 's mask should have ended the fight right there. Anyone who has seen a real luchador fight or even Mucha Lucha knows that the removal of a luchador mask represents dishonor and the fighter's defeat. Yet, only when Sister Encarnacion and the orphans show up that Nacho feels to fight again. It may be a nitpick to some, but to me, that pretty much ruins one of the most important rules of luchador fighting.

The worst part of the movie is the relationship between Ignacio and Sister Encarnacion. It seemed that the writers wanted to add in something else to give the story substance, but forgot until the end of the movie that Catholic friars and nuns are celibate to God. This relationship is absolutely pointless and leads up to nowhere. If they would have cut out this plot point out of the movie, almost nothing would have changed, especially since Sister Encarnacion has little to no screentime or character development in this entire movie. I think that bringing in the same people who wrote and directed Napoleon Dynamite didn't work for this film. It doesn't have the same charm and subtle humor that Napoleon Dynamite had. There were no memorable quotes, characters, or scenes that pop into my mind when watching Nacho Libre. I can see some traits of the characters from Napoleon Dynamite in the characters of Nacho Libre a little bit, but it wasn't executed as properly. I felt that they were trying to catch lightning in a jar twice with different characters, a different setting, and a different storyline, but it didn't mesh well with the overall project.

I felt that the story of Rev. Benitez should have been told legit as a serious dramatic film as oppose to a comedy because I think that there's something in there that can be told that could be a true inspiration for many people. They're not a lot of Mexican heroes in pop culture and Fray Tormenta is still being told today. If they would have giving Nacho Libre the same love and attention that Million Dollar Baby did in 2004, Cinderella Man did in 2005, and Rocky Balboa did in the same year that Nacho Libre came out, I think it would have been a stellar film. I know that someone could take this really fascinating story and make into a possible Oscar winning film. What it is now is a lackluster comedy with too many wrong things going for it missing the potential to be something worthwhile checking out.

That's all for now. Tune in next time as we look into another Nickelodeon movie with Barnyard.