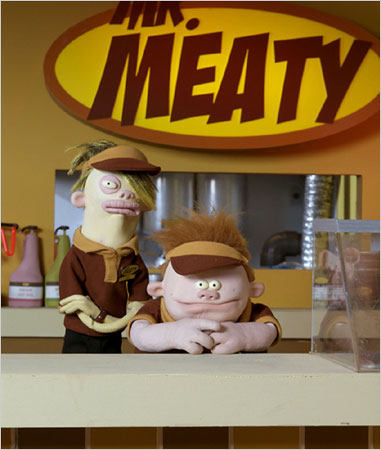 Around that time period, puppets on preschool shows were pretty much dead. Shows were either a group of people in silly, colorful costumes, people in suits, or it was animated. The media decided to showcase puppets in a more adult direction with shows such as Crank Yankers on Comedy Central and Avenue Q on Broadway. Mr. Meaty was originally shown in shorts during the commercials on Nickelodeon and was eventually picked up for a TV series similar to The Adventures of Pete & Pete, KaBlam!, and Jimmy Neutron: Boy Genius. So with that, the show was directed at a more teenage audience. How does the show hold up? Let's find out.

The show takes place in a fast food restaurant called Mr. Meaty located at the Scaunchboro Mall. The two main characters are Josh, the smooth talking ladies' man and Parker, the fat, nerdy teen. They work at restaurant encountering typical teenagers and going through everyday teen situations. However, the episodes take it in a different direction from time to time focusing on supernatural or science fiction scenarios that the boys have to solve in order to save the day. Episodes would have vampires, zombies, and aliens visiting Mr. Meaty for one reason or another and Josh and Parker would either stop them or befriend them. However, most of the episodes have a gross out factor to try to entertain the audience. In one episode, Josh and Parker's hands fell into the deep fryer and they actually ATE their hands. In another episode, one of their customers' nose fell on the fryer and Josh and Parker had to replace it. What did they replace it with? A sandwich. You heard me right. A sandwich. Genius. You also had your typical burping and farting jokes to seal the deal. Around Season 2, they toned down the gross humor and replaced it with more typical teenage problems about growing up. It was at that point in which teenagers stopped watching it and adults had petitions of cancelling the show. Many people including parents and vegetarians wanted this show to stop airing because they thought it was absolutely disgusting to see.

Eventually on May 23, 2009, Mr. Meaty was cancelled after 20 episodes due to low ratings, negative remarks from parents, and the help of the petitions to Nickelodeon of cancelling the show. This is truly one of the lowest points of Nickelodeon and quite frankly, one of the worst shows I've ever had the displeasure of watching. First and foremost, the puppets are absolutely ugly. I'm not blaming this on low budget like I did for Pinwheel, these look like they were the intentional design and it's absolutely revolting. The lip sync is off sometimes and the movements are very basic. Plus, Josh and Parker are the names of Josh and Drake's last name on Drake & Josh. It seems like they took the tropes of Drake and Josh and put it in reverse on Mr. Meaty. Parker is similar to Josh in which he's a fat, nerdy kid who can't get a date and Josh is the skinny, cool kid who gets all the girls and doesn't care about anything else. This is absolutely lazy. If this was not intentional, then it's one of the biggest coincidences I've ever seen in a Nickelodeon show. Maybe I'm wrong. You be the judge. The one thing that kills this show for me are the cliched characters, terrible writing, and horrible jokes. None of the episodes were memorable and none of them were fun to watch. It's crude, it's disgusting, it's just plain lousy. However, as time went on, this show has developed a huge cult following from teenagers and young adults who watched the show when they were kids. But, I feel that there are much better shows out there involving with adult humor and puppets. I highly recommend you check out Sifl and Olly, Greg the Bunny, Crank Yankers, Avenue Q, and Sock Puppet Theatre. Stay away from this show if you can't. It's one of the worst shows that has featured on Nickelodeon and I'm not surprised that there wasn't another one in this format afterwards. I don't recommend checking it out.

That's all for now. Tune in next time as we conclude this episode with the last Nickelodeon movie to feature in 2006. The farmer from Barnyard can tell us what it is. 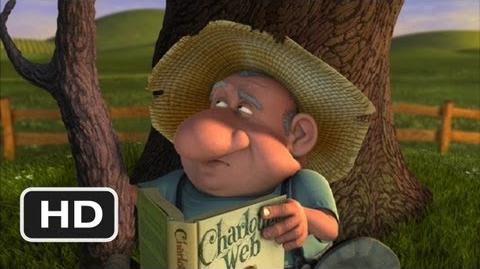 Hope to see you around Old School Lane. Thanks for reading.