The year is 1999. The Matrix, The Sixth Sense, American Beauty, and Stanley Kubrick's last film Eyes Wide Shut were released in theaters. Freaks and Geeks, The Sopranos, Providence, and Who Wants to be a Millionaire? debuted on TV. The 90's were coming to an end and there were big discussions about what was going to occur when the year 2000 would come. Would there be futuristic devices like flying cars and food pellets like The Jetsons? Would the internet crash causing a huge disaster? Would the world come to an end and the Second Coming of Christ happen? But if you were a kid, you wouldn't care about that. Around the last year of the 20th century, many changes began to occur, especially in animation. More on that later. On January 17, 1999, Nickelodeon had aired their new Nicktoon: a show called The Brothers Flub.


The show was about two alien brothers named Guapo and Fraz who work as couriers in a company called RetroGrade Interdimensional Courtiers led by a mean alien woman named Tarara Boomdeyay. The brothers would travel around the galaxy in their spacecraft called the Hoog to deliver packages to various planets. The planets would be a hippy planet filled with beatniks or a planet that had larger than life game pieces like a pinball machine. 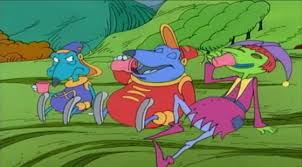 They would also interact with their co-workers such as Valerina, who was a level-headed mature alien who gets her work done and Squish, an older alien. Each episode has Guapo and Fraz travel into a different planet and doing their work lazily. They get themselves in crazy hijinks that end up in a big adventure.

The show was created by Laslo Nosek and David Burke and the production company behind it was Sunbow Entertainment, the same company who produced G.I. Joe, Gem, Inhumanoids, Transformers, and My Little Pony. Before the show was released, there were some huge advertisements going into The Brothers Flub such as toys, flyers, and children's vitamins. From Sketchers to Carls' Jr. to KFC, there were high hopes for this show to be a hit because of the company's reputation of producing good cartoons. "The series will attract kids both male and female. The Brothers Flub will fit right into the Nickelodeon time-slot because the show is 'Nickelodeon-like', said Laura Sullivan, the senior director of Sony Wonder in a 1999 interview with Promo Magazine.

The show lasted for one season ending its run on January 8, 2000, less than a year after it aired. The show was panned by critics saying that it was "mean spirited", "clunky", and "an Aaahh! Real Monsters clone without the charm". Almost no one watched it. Kevin and I haven't even heard of this show when it first came out and we were Nickelodeon junkies. When rediscovering it, I found it to be nothing special. It was clunky, not funny, and already been done before. I had already seen duos get into gross, funny humor with Ren and Stimpy, Aaahh! Real Monsters, Rocko's Modern Life, and The Angry Beavers. The Brothers Flub was trying to catch up with the craze. That's fine and all except that there are three problems to this.

1. The craze of gross, disgusting humor that Nickelodeon was known for was already starting to wane at this point. Kids were already mature enough to not laugh at poop and fart jokes. If The Brothers Flub would have came out in the early 90's, maybe it would have been a bigger hit. But in the year 1999, kids and teens wanted to see something more catered to them: more adult, more creative, more wittier, and more funnier. Which brings me to #2.

2. There were other shows that were coming out at 1999 that was starting to hit the market. Ed, Edd, and Eddy, Family Guy, and Batman Beyond came out at the same month as The Brothers Flub. Not to mention a similar concept of The Brothers Flub came out two months later in March 1999 that was funnier, more creative, had memorable moments, and better characters. That show was Futurama.

3. Animation was taking a different turn around 1999. Thanks to Pixar, people were more interested in 3D thanks to the huge success of Toy Story, A Bug's Life, and Toy Story 2. Not to mention that Kids' WB changed their programs from shows produced like Animaniacs, Freakazoid, and Pinky and the Brain to anime. Shows like Sailor Moon, Dragonball Z, and Pokemon kicked off the anime craze like wildfire. Not to mention movies such as Hayao Miyazaki's Princess Mononoke.

For the production company Sunbow, it was their lowest point ever. Eventually, they shut their doors in 2003 due to bankrupcy.

Overall, The Brothers Flub was a show that was 6 years behind the ball and has since been forgotten. It wasn't creative, new, or innovative compared to the other shows that were airing at the time. Look past that and you see a show that was clunky and a bit mean spirited. I don't recommend checking it out. 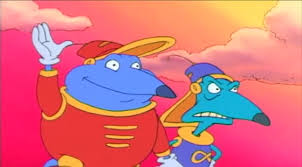 While that was a bit of a low point in Nickelodeon, it would make up for it with their biggest Nicktoon yet that would debut a few months later. Tune in next time as we discuss all about it.