Klasky Csupo was doing extremely well in Nickelodeon around the 2000's. They had 4 successful TV shows with Rugrats, The Wild Thornberrys, As Told by Ginger, and Rocket Power and they released two financially successful movies that made over $150 million dollars. Their name meant quality, creativity, and classic animation back then and it seemed that they couldn't do any wrong. Their next announcement was their next movie based on another of their cartoons. On December 20, 2002, The Wild Thornberrys Movie debuted in theaters. As I mentioned in my The Wild Thornberrys review, I don't like the show saying that it was boring, overrated, and has mostly annoying characters. So I didn't see the movie when it came out in theaters. But when we decided to do the tribute, I had no choice but to see the movie. Does this movie make me change my mind of the series or does it confirm my dislike for it? This is The Wild Thornberrys Movie.

The movie begins in East Africa where the introduction is a more different take on the intro from the TV series. Then we cut to the Thornberry family leaving to shoot footage of the elephants for their nature show while Eliza, Debbie, Donnie, and Darwin stay near the Comvee. Nigel's mother Cordelia from England is visiting the family taking in on the African safari. Eliza and Darwin leave the Comvee to hang out with a cheetah mother and her cheetah cubs. While they were playing, a helicopter appears out of nowhere and kidnaps one of the cheetah cubs named Tally. Eliza rushes and tries to capture the cub while hovering over the helicopter grabbing the net, but with no luck. The kidnapper pushed Eliza out of the copter. Eliza is saved due to Nigel and Marianne catch her with the Comvee. With Eliza being scolded by her parents for the reckless thing she did, Cordelia suggests that she would be sent to an all girls' boarding school in England to straighten her out. Eliza refuses, but her parents agree to do so. Nigel and Eliza have a father/daughter discussion that ends with him giving her a necklace. Darwin was disappointed when he learned about it, but Eliza had no choice but to go. 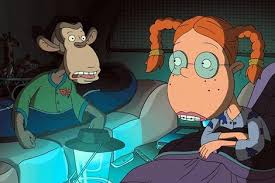 The next morning, Eliza leaves for the airport and arrives in England. While trying to adjust to her new surroundings, she meets up with her roommate Sarah Wellington. Sarah is a very snobbish girl who wishes for Eliza to keep away from her space and stuff. While adjusting, we see Darwin get out of Eliza's suitcase and disguises himself as a schoolgirl with Sarah's clothes. When their serving dinner, Darwin heads downstairs, but Eliza recognizes him right away and tries to hide him from the other girls. But Darwin make a huge mess and starts a food fight. With it, Sarah gets extremely messy and filled with food.

Then the other girls ask questions about Eliza and hears stories about her travels around the world. Sarah grows jealous with Eliza getting a huge amount of popularity among all the other girls. That night, Eliza dreams about the witch doctor who gave her her powers Shaman Nnyambo that she has to save Tally because she's in serious danger. Eliza wakes up and begs Sarah to pay for her trip back to Nairobi. She accepts and the next morning, they arrive in Nairobi. While taking the train, they see a hippo severely injured and captured with a net. They left the train and find out that the hippo was almost captured by poachers. Eliza and Darwin walk near the train tracks to get back to East Africa. 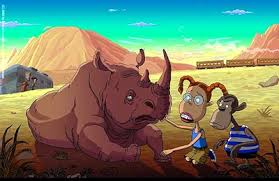 All of a sudden, a trailer drives by and two people named Sloan and Bree Blackburn help the hippo out. They are animal conversationalists who cared for the hippo and called an animal resort center to pick it up. Eliza and Darwin then continued on their journey. Meanwhile Debbie was at the Comvee looking over Donnie and sees her grandparents parachuting from a plane to find Eliza to take her back to school. The next day, Eliza makes it to the sahara where Tally was kidnapped to find clues. They meet up with Donnie and they continue to look around. That night, they meet up with Sloan and Bree and they talk about their love for animals. Eliza felt closure to them since it seems that they understood her love of animals. 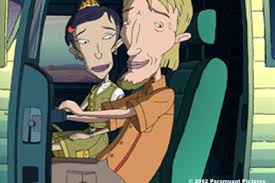 When Debbie finds out that Donnie is missing, she borrows the family motorbike to search for him. She stumbles upon an African tribe where she asks the tribe members for help. None of them knew English and were willing to help except for a teenage boy. Debbie tries to communicate with him, but with no luck. However his willingness to help convinced Debbie to bring him along for the ride and she starts calling him Boko. Meanwhile, Donnie sneaks into Sloan and Bree's RV and looks around. Eliza and Darwin retrieve Donnie, but find Tally in a cage in the corner. Eliza then finally realizes that Sloan and Bree were the ones who kidnapped Tally and shot the rhino. While trying to get Tally out of her cage, Sloan and Bree find out that Eliza knows their secret of them being poachers. They reveal their plan of building an electric fence to kill all the migrating elephants to steal all their ivory. Sloan threatens to tell Eliza how they knew of their tasks, but Eliza stays silent. They then see Debbie in their cameras and Sloan has a plan. When Debbie asks Sloan if they've seen Donnie, Sloan grabs her and drags her near a cliff. Eliza runs out and tells him her secret of talking to animals. The spell is removed and Eliza loses her powers. Sloan and Bree run away and frees Debbie. The group drift on a log in a river while Debbie tries to put the pieces together of all of Eliza's actions. When she learned of Eliza's sacrifice, she gives her a sisterly embrace. When the log nears a waterfall, they all escape before the log falls. 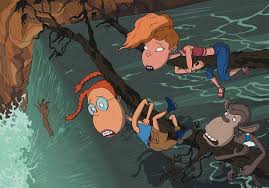 Boko shows up with Debbie's motorbike and rescues them. That night, the poacher's plan commences with them activating the electric fence. Eliza makes it to one of the elephants and tries to communicate with it, but with no luck. Sloan orders his men to detonate explosives nearby to lead the elephants to its path and they continue to walk to the fence. Eliza then learns about kicking an elephant behind the ears and it responds. Sloan orders his men to detonate another set of explosives and most of them continue down the fence. Eliza then throws her father's necklace at the fence and they start walking away from it. 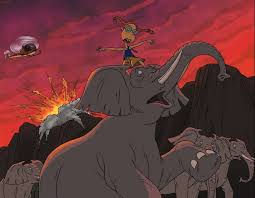 Sloan grabs Eliza from the copter about to drop her into the river when the shaman grants her powers back. She orders the elephants to attack and they grab the copter before it takes off. The officers then arrest Sloan, Bree, and his henchmen and the movie concludes with everything restoring back to normal.

When the movie first came out, it was a huge success. While it wasn't as financially successful as the first two Rugrats movie, it was critically successful. At the time, it was the highest rated movie that Nickelodeon ever aired with it being 80% according to Rotten Tomatoes. As for me, it was okay. The first half was extremely padded with the pointless plot of Eliza going to the boarding school with her leaving it moments later and underdeveloped moments in which Nigel and Eliza had father/daughter time. But then, things start to get interested in the second half with the inclusion of Sloan and Bree and the nice twist of Eliza losing her powers. You feel sadness when Eliza loses the one thing that made her unique and special, which is a surprise since I felt that she used that power in the wrong way in the TV series. In the movie, while she did make the mistake of not watching the baby cubs long enough, she worked hard in getting one of them back. It's sort of similar to the plot of Jimmy Neutron: Boy Genius, but without the worthless padding in the first half of the movie. To me, it felt like a longer episode of the TV show. Nothing really special to it. If you're a fan of The Wild Thornberrys, I'd say check it out. If you're not, then take it for what it is. It's not too bad.

That's all for now. Tune in next time as we go into the year 2003 with Rugrats' spinoff show All Grown Up!