Around 1987, there was a new competitive sport that formed around Denver, Colorado involving two people building robots to fight one another in a huge tournament against other people and their robots. That was called "Critter Crunch". Then around 1991, a man named Marc Thorpe, a designer for LucasToys division of Lucasfilm organized Robot Wars, a televised program about a group of people building robots for battle. As time went on, more and more robot combat tournaments formed. The popularity slowly grew into a major cult following and became more mainstream when another TV program named Battlebots debuted on Comedy Central around 2000. When I was in Willvolution, one of the members of the site was involved in robot combat with a group of his friends. Nickelodeon decided to make a kid version of Robot Wars and called it Nickelodeon Robot Wars which debuted on August 25, 2002.

The show would follow the competitors, which mostly contained kids with their parents, as they would talk about their robot and how they would build them. Then as time went on, we would get to a battle between the robots. Each episode had a couple of battles, but some would spread to other episodes. The robots would be placed in a arena filled with many hazards to damage it more such as the Disc of Doom which would spin a robot to disrupt the controls, The Drop Zone where a heavy object such as a giant hammer would be dropping in a certain spot in the arena, and much more. The robots would have a few minutes to fight one another and the robot who survives, wins the round. 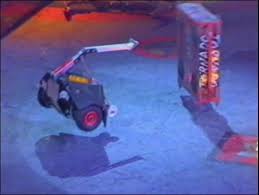 Nickelodeon Robot Wars was cancelled due to low ratings on October 6, 2002, less than two months after it aired. Next to the 2002 reboot of Wild & Crazy Kids, it's currently the shortest lasting game show in Nickelodeon history. I can understand that robot combat is not for everyone. Some find it exciting, some found it boring. Most kids who saw it were confused to what it was and that something so bizarre could even exist. As for me, I enjoy this sport. It's very creative, filled with ingenuity, and very action packed. As for Nickelodeon's version of Robot Wars, it's pretty decent. Sure, some of the hazards had to be omitted such as flame pit, the fire jets, the buzzsaws, and the constant swearing, but it was shown on Nickelodeon. What do you expect? As time went on, robot combat slowly died away from the mainstream audience and went back into the underground territory where it's still hugely popular to this day. But now this sport is coming back in a new way in the form of the 2011 movie Real Steel and Syfy's Robot Combat League making fighting robots cool again. 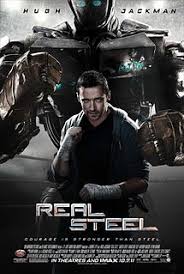 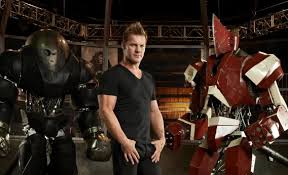 If you're a fan of robot combat tournaments, I would say check it out. But definitely watch the original Robot Wars since it has more hazards and action.

The next game show that debuted on Nickelodeon was based on another fad: scaring people in real life scenarios. Horror movies such as Friday the 13th and The Blair Witch Project made kids go into the woods or a camping ground where the unexpected was around the corner. It was dark, mysterious, spooky, and scary. Not since Are You Afraid of the Dark? there was a scary and thrilling show on Nickelodeon. That is until Scaredy Camp debuted on October 27, 2002.

The show was about a group of kids in a summer camp called Camp Lindenwood. At night, the host of the show Emma Wilson, the daughter of Weakest Link host Anne Robinson, would tell the story of an urban legend based on the camp. At the end, they would have to find clues based on the legend that they learned about. We would get to see the kids looking for the clues in the dark, scary camp in which as time went on, spooky things would be occurring. Really, not much to say about the show. The show lasted for less than a year until it ended on August 16, 2003. It was extremely difficult to find episodes online since it hasn't been on the air since 2007 and hasn't aired on Nickelodeon ever since. The show was a very interesting concept and had a really spooky atmosphere.

I commend these game shows since it wasn't a reboot of an old game show and it was outside the box of what was a typical Nickelodeon game show was at that point. It was nice for them to take risks, but those risks were their downfall. It didn't find an audience and nowadays, it had been hugely forgotten. It's a shame too because if people would've have given it a chance, maybe more unorthodox game shows for Nickelodeon would've came out. Unfortunately, this would be the first indication of people's disinterest in game shows for kids.