Happy Passover, everyone! While you are celebrating the day of deliverance from Egypt while eating matzo ball soup and beef brisket, it's time to review the only Passover special that Nickelodeon has ever aired. That special is the one and only A Rugrats Passover.

The special was conceived back in 1992 when Paul Germain, Arlene Klasky, and Gabor Csupo pitched the idea of a Hanukkah special to the Nickelodeon executives. As time went on, they decided to do a Passover special that was both informative and fun. Paul Germain and Rugrats storyboard writers Peter Gaffney, Rachel Lipman, and Jonathon Greenberg wrote the script and years later, the special debuted on April 13, 1995. Is this Passover special a miraculous masterpiece or should it be passed aside with the locusts and flies? This is A Rugrats Passover. 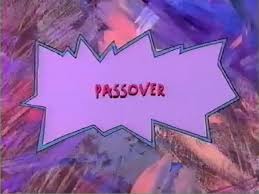 The special starts with Stu, Didi, and Tommy driving over to Didi's parents Boris and Minka to celebrate Passover. Stu wasn't really interested in going to Passover dinner since he's not Jewish, but Didi pushes him to go. Meanwhile Drew, Charlotte, and Angelica are driving over to Boris and Minka's house as well. Angelica wants to eat cookies, but learns that she can't because she can't eat any type of baked goods with yeast. Angelica questions on why she has to celebrate Passover since Boris and Minka are Tommy's grandparents and not hers. Regardless, they head over to the house. When they head over to the house, Minka opens the door with tears in her eyes since she can't find Boris. Boris and Minka had a big argument and now Boris is gone. Next, Chaz and Chuckie come over to the house for Passover celebration and it's decided that Stu would be in charge of leading the Passover dinner.

While Stu leads the dinner, Tommy, Chuckie, and Angelica leave to wander around and end up in the attic. When Angelica opens the door, she finds Boris in the corner and urges Angelica not to close the door. However, it's too late. Boris tells them to get comfortable since the door can only be opened from the outside. Angelica doesn't see it as a big deal since she says that Passover is a boring holiday. Boris objects and decides to tell them the story of the origins of Passover. 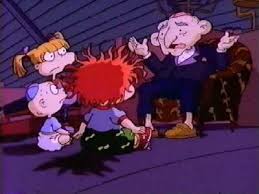 Next, Tommy conjures up many plagues such as frogs, flies, locusts, and darkness to make Angelica change her mind. With every plague, she promises to let the babies go and changes her mind just as quickly. Drew and Charlotte find out that Angelica is missing and wander themselves into the attic. But then Charlotte closes the door and find themselves stuck. So they sit down and Boris continues with the story. Tommy releases the final plague which is to get rid of all the first born Egyptians. When Angelica learns that she's a first born, she makes a promise to Tommy to free all the babies in order for her to not being taking away. Tommy agrees. Didi, Stu, and Minka find out that everyone is missing and start to look around and make it to the attic. The adults all reunite and Angelica interrupts saying that she wants to know the end of the story. Boris finishes the story when the babies begin to pack up their stuff and head over to the Promised Land. When they stop at the Red Sea, Angelica and her soldiers charge them wanting to take the babies back to Egypt. Finding themselves trapped, Tommy opens up the Red Sea and they walk the path. Afterwards, the Red Sea closes and Angelica loses her babies. Tommy and the babies celebrate with them being free from Angelica's rule. 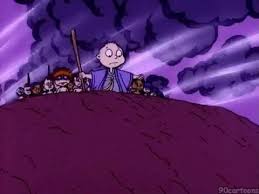 Boris concludes the story with the celebration of Passover to remember the Hebrews being free from the Egyptians. Didi says that it's time to finish the dinner, but the wind closes the door. Boris decides to tell another story about how his parents first met.

When this special first premiered, it was praised by many critics and viewers. At the time, there were rare times in which a kids' show would celebrate a Jewish holiday. To this day, A Rugrats Passover is the highest rated show as well as the most viewed holiday special in Nickelodeon history. A Rugrats Passover was the last episode of the 3rd season before the 3 year hiatus and the eventual dismissal of Paul Germain and many of the Rugrats animators and writers. What a way to end, in my opinion, the best seasons of Rugrats. It's a beloved classic that explains the origins of Passover in a way that kids could understand while still keeping the origins of the holiday. It still holds up to this day and I highly recommend checking it out!

That's all for now! Hope to see you around Old School Lane soon. Happy Passover!