The show took place after Jimmy Neutron: Boy Genius in which in involves Jimmy Neutron (voiced by Debi Derryberry) doing crazy experiments alongside with his best friends Carl Wheezer (voiced by Rob Paulsen) and Sheen Estevez (voiced by Jeff Garcia). All of a sudden, the experiment would go horribly wrong and it's up to Jimmy to save the day. 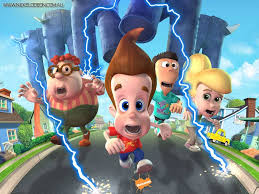 What's interesting about this show is that, unlike the majority of animated Nickelodeon movies that would become a TV series, the majority of the main voice actors came back to do it. This becomes a plus because most of the time it would be major celebrities voicing the main characters and they would have to hire voice actors to impersonate them. But this is not the case: with the exception of the villains King Goobot and Ooblar (voiced by Patrick Stewart and Martin Short), most of the people who voiced the characters were voice actors. Also, when watching this show, it's nice to know that there's continuity in it. It's very well established that this series takes place after the movie since they do bring back King Goobot and Ooblar despite the fact that they're voiced by dsifferent actors. Not to mention that they bring in new villains to the show such as absentminded Professor Calamatous, his good looking daughter Beautiful Gorgeous, the spoiled rich kid Eustace Strich, the alien trio Zix, Tee, and Travoltron, Grandma Taters, The Junk Man, and more.

While that all seems nice and dandy, the show has some major flaws. One thing, the majority of the episodes are extremely monotonous. The same thing happens on every episode: Jimmy invents something, the invention goes wrong, Jimmy doesn't know what to do, he solves it by something he learned a few minutes ago, and problem solved. I understand that in the first movie he made a lot of mistakes was because he was a kid. He didn't listen to his mother's warning and he went through the consequences of almost losing the entire town of Retroville's parents to Poultra. But he learned his lesson and fought to stop King Goobot from accomplishing his goals. He was more relatable that way because we already had Dexter from Dexter's Laboratory to be the child prodigy. He was a stick in the mud and didn't have time for anyone else, especially friends. He concentrated on his experiments  Jimmy was the slight opposite. While he was a child prodigy, he was still a kid. He had friends, he didn't like girls, he liked sugary snacks, and he invented things that a kid would like. However, that's pretty much thrown out the window with the animated series. 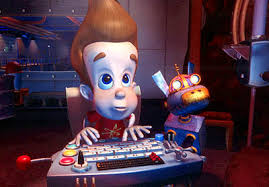 Jimmy in the animated series is a lot more conceded and a lot more in-your-face when it comes to his intelligence. He feels like he's the smart one in his group of friends and that everyone around him is useless. As I mentioned in my top 20 worst Nickelodeon male role models, Jimmy has became very unlikable in the TV series. When you have a main character that is this unlikable in a kids' show, why should we root for him when he saves the day?  It's hard, isn't it? Unfortunately, as much as that is a bit harsh on Jimmy's part, it's true. Carl and Sheen are useless when it comes to the bad scenarios with Jimmy's experiments. While I do understand that there has to be a comic relief in any show for kids, but having two is overkill. While it is true that they're comic reliefs for different reasons, Jimmy really needs another person's help when it comes to dealing with his experiments. Carl and Sheen hang out with Jimmy all the time and they should be a little bit knowledgeable with what to do with science. Sure, Sheen would be a huge stretch, but at least he knows pretty much everything about Ultra Lord, his favorite superhero. He can be smart when he needs to be, which is extremely rare. Carl is innocently stupid. He's a sick, chubby kid who loves llamas. However, the show has proven that Carl is the dumbest in the group, which is a bit unfair. I really like the character, but he never had a chance to shine and show his full potential. He's kind and sweet, but a bit useless. If you would have cut out Carl as a character, not much would be different in the show. But then again, most of the men on the show are complete morons. It seems that it's the women in this show seem to be more capable of saving the world more than the men which enhances the stupid old cliche of women being smart and men being stupid that you see in most kids' shows.

Another huge flaw is the first few seasons. There is no incoherent plot in the majority of the first few episodes. As mentioned previously, it's very monotonous of doing the same thing over and over again. As time goes on, things start to get interesting when the villains start to appear. Other than that, some of the episodes are a huge snorefest. You're just waiting for something interesting to happen, but in the end, you're going to get the same thing over and over again. The later seasons are better, which I must give props to. The TV movies involving with The Fairly Oddparents are the best things that the show has ever been involved in. While the show was created by two different people, for some reason, they really work. Except the third movie, that one sucks.

The final nail in the coffin involves with the final season. The episodes of the final seasons were mixed up and shown in an incorrect order. The TV movie special involving Jimmy meeting up with his major villains Professor Calamatous, Beautiful Gorgeous, Eustace Strych, Junk Man, Baby Eddie, Grandma Taters, the alien trio, and Goobot was shown before they even introduced Grandma Taters or Baby Eddie. Kids watching this the first time around would be confused. Also, they showed the final episode "Lady Sings the Blues" in the incorrect order as well. They showed the final Jimmy Timmy Power Hour as the last episode of the series. Inconsistency is thrown out the window in a time in which it was the most important. That is unacceptable.

The show lasted for 4 years until it ended its run on November 25, 2006. I stated a lot of flaws in the show that might make people who grew up with it as kids very angry, but I'm sorry. I just see a show that has too many not to ignore. While it was one of the most popular Nicktoons in the 2000's, it just doesn't do it for me anymore. I'm really disappointed and heartbroken by it because it had the potential to be a more relatable version of Dexter's Laboratory, but it doesn't do that unlike the movie. While the animation is decent and the voice acting is fantastic, this is a show that is a little bit too hard for me to recommend checking out with the exception of nostalgia.