Around the late 90's, extreme sports such as skateboarding, surfing, BMX biking, and snowboarding were becoming extremely popular due to the undeniable success of the X-Games. The undeniable king of the vert skateboarding was Tony Hawk who had accomplished the impossible trick, the 900, on July 27, 1999. Even if you never seen the X-Games, you knew from someone or somewhere that skateboarding was all the rage. Before Neversoft released their now iconic skateboarding game based on the king of skateboarding Tony Hawk's Pro Skater a month later, the minds of Arlene Klasky and Gabor Csupo had created their last Nicktoon in the 90's. That cartoon was known as Rocket Power which debuted on August 7, 1999. The show took place in California in which three kids would spend their days skateboarding, rollerblading, surfing, or biking. The kids were the siblings Otto and Reggie Rocket and their best friend Maurice "Twister" Rodriquez. When a new kid moves into their neighborhood, they decide to see who it was. It turned out to be a chubby, pale, nerdy kid from Kansas named Sam Dullard. Not too familiar with sports due to him being a technology nerd, the group decided to take him in and teach him how to play street hockey and other sports. Seeing that he has an up-to-date computer, Reggie approaches Sam to help her publish a new sports magazine. When playing street hockey, they learn that Sam is not the most athletic, but he had proved to be an excellent goalie. With Sam's potential to be a good athlete and his technological know-how, Otto, Reggie, and Twister decide to have Sam as a member of their group calling him "Squid", meaning he was the new guy.

We were also introduced to the adults in the show consisting of Otto and Reggie's father Ray "Raymundo" Rocket, a surfer, owner of a skate/surf show and a burger joint called The Shore Shack, Tito Makani, Ray's Hawaiian best friend who helps him run the Shore Shack, Twister's mean older brother Lars, their next door neighbors Violet and Merv Stimpleton, their police officer friend Officer Shirley, and Sam's overprotective mother.

Each episode would have Otto, Reggie, Twister, and Sam partake in an extreme sport pulling off some crazy tricks or learning how to pull off new ones. We would also see our characters go through everyday problems from Otto and Twister getting good grades, Sam trying to learn how to skate and surf alongside his friends, or Reggie trying out for volleyball. For kids who had a love of going outside to skateboard, riding bikes, or surfing, Rocket Power had became a favorite. Just like The Wild Thornberrys, Klasky and Csupo had released a Nicktoon to cash in on the popularity of what kids were into at the time. While Nickelodon's Sk8-TV was the first show to cash in on the skateboarding trend of the 90's, Rocket Power improved on it by tenfold by having surprisingly relatable characters, a real life setting in California, and real colorful animation.

The show lasted for 3 seasons ending its run on July 20, 2004. Overall, I found the show to be pretty okay on its own, but awesome if you're a huge fan of extreme sports in the late 90's. This was a show that looked it was made by extreme sports fan for extreme sports fan. The characters were relatable and at times generic, the animation was colorful, and the lingo, laughable now with terms like "lame-o" and "shoobie", was fitting in the 90's. The diversity of different sports they would play and the encouragement of going outside to play is absolutely refreshing to see with today's kids interesting in video games, TV, and cell phones. Admittedly, Rocket Power hasn't held up very well since the popularity of extreme sports has waned down over the years and a lot of the episodes kind of blend in with one another making some of them forgettable While not up-to-par with Rugrats and Aaahh! Real Monsters, Rocket Power is a show that comes highly recommended if you're a huge fan of extreme sports during the 90's. But for other people, it's probably worth skipping. 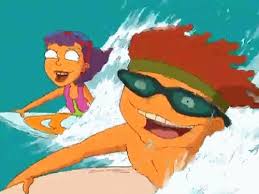 -Patricia
Posted by Old School Lane at 7:18 AM