As the 80's came to a close, It was around this point that Tim Burton's reputation as one of the most artistic, unique, and creative directors in Hollywood was beginning to establish. With three movies a critical and financial success under his belt, he began to work on his next movie. He produced and directed what many people consider to be one of his best movies ever made. That movie is the 1990 romantic comedy Edward Scissorhands. The inspiration for this story was based on Tim Burton's upbringing in Santa Clara, California feeling isolated, depressed, and alone. While Frankenweenie was a rendition of himself as a child, the character of Edward was based on himself as a teenager. "I get the feeling people just got this urge to want to leave me alone for some reason, I don’t know exactly why". So when Burton read a short novel called First Born written by Caroline Thompson about an abortion coming back to life, he hired her to write the script for Edward Scissorhands.

While working on the movie at Warner Bros., the same studio that distributed his previous movies, they sold the film rights to 20th Century Fox. The studio gave him full creative control for the movie. So with everything riding on this one film, does Tim Burton start the 90's off with a slashing success or has the scissors rusted over time? This is Edward Scissorhands. 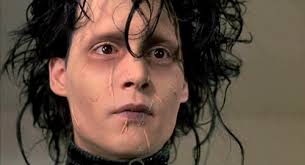 The movie begins with an old woman and her granddaughter looking at the snow. The granddaughter wonders where the snow comes from. The old woman looks up reminiscing and tells the story about a man named Edward Scissorhands (played by Johnny Depp). He appears to be a normal boy except that he has scissors for hands due to his "father"/inventor (played by Vincent Price). His final gift for his creation was a pair of human hands so he can be able to have a normal life among people. However, he died of a heart attack before he can get the job done and Edward is left alone and unfinished. With his "father" dead and no one else knowing he exists, he is left in the Gothic mansion where he lives to remain alone forever. 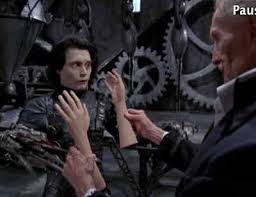 Many years later, we cut into a Avon salewoman named Peg Boggs (played by Dianne West) approaching the Gothic mansion where Edward lives. While looking around, she finds the place empty and abandoned, but not before long when she sees Edward with her very own eyes. Instead of being afraid of him, she's friendly to him. When asking about where his family is, he says with a very sad response that they didn't wake up. She feels bad for Edward and decides to take her home with her family. 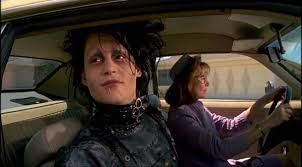 Peg lives in a quiet suburban neighborhood with her husband Bill (played by Alan Arkin), her youngest son Kevin (played by Robert Oliveri), and her older daughter Kim (played by Winona Rider). At first, they find Edward a bit strange and odd due to his appearance, but as time goes on, he's welcome into the neighborhood due to his ability to hedge-trimming and hair cutting abilities. The hedges presented give the movie such a brilliant appearance and a wonderful craftsmanship that is organic and alive. It's so inviting and bright compared to the dark, spooky atmospheric art pieces in Beetlejuice. 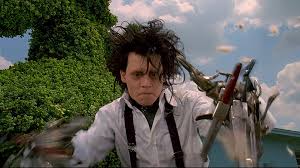 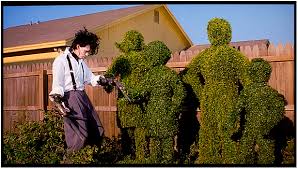 However, there are a few people in the neighborhood who absolutely can't stand Edward: a crazy, psycho religious woman named Esmeralda (played by O-Lan Jones), Kim's boyfriend Jim (played by Anthony Michael Hall), and Joyce (played by Kathy Baker). Throughout the movie, Edward's reputation gets tarnished due to the acts of Jim and Joyce for different reasons. Joyce offers Edward an opportunity to open a hair salon alongside with her. Edward accepts. When they look at a possible building for the salon, Joyce takes Edward to the back and tries to seduce him. Edward panics and runs away from her. 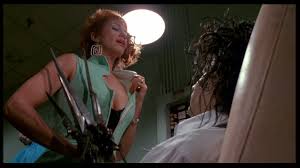 As for Jim, he tricks Edward to unlocking the locks of his parents' house. When he's captured by the police, the neighbors that once respected Edward questions his personality, so they ignore him. Around Christmas time, Edward, Peg, and her family are dubbed as outcasts among the neighborhood. So they spent Christmas time, they spent it alone. Edward goes outside to create ice statues for Kim. 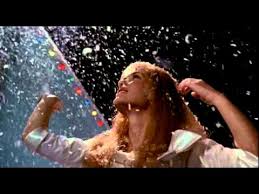 While Edward is doing this, Kim sees the snow flakes and dances around to it. When Kim and Edward get close to each other, Kim's hand is accidentally cut by Edward. Jim sees this and pursues to chase Edward away from the neigborhood after getting cut in the face by Edward's hand. Edward runs back to the Gothic manor where Kim follows him. Edward tells Kim that he can no longer be around people and must now forever stay at the mansion alone forever. All of a sudden, Jim appears and attacks Edward. Edward defends himself and does not attack Jim until he pushes Kim onto the floor. Edward attacks Jim leaving him falling to the death. 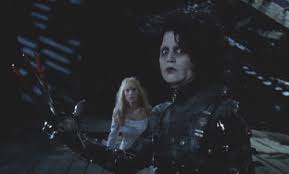 When Kim returns to the neighborhood, she tells them that Edward and Jim killed each other. With that said, the neighbors are sad for the loss of Jim and Edward and return to their homes. We then cut back to the old woman and her grandchild. It's revealed that the old woman is Kim finishing the story of her and Edward. She never saw Edward again due to her not ruining her rememberance from her youth. She tells him that Edward is still alive and immortal since he's artificial. He would create the ice sculptures every year that would cause the snow to fall down on the neighborhood. The movie ends with Edward creating more sculptures and a young Kim dancing on the snow falling below. 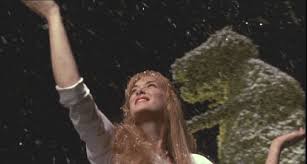 Overall, the movie was highly praised when it was released in theaters. They had loved the performances of the actors, the story was tragic and heartwarming, the music was wonderful, and the artistic scenary was captivating. For many people, Edward Scissorhands is considered Tim Burton's masterpiece. I think it's really good! I love the story, music, art, and actors. The final performance of Vincent Price was fantastic, the relationship between Edward and Kim was great, and the story was sad, yet mesmering. I highly recommend checking it out! 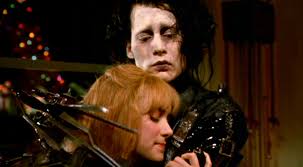 That's all for now. Tune in next time as we discuss about Tim Burton's 5th movie. The second installment of the Batman franchise: Batman Returns. 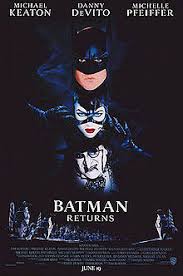 Hope to see you around Old School Lane soon.

-Patricia
Posted by Old School Lane at 10:32 AM