The movie Beetlejuice became a critical and financial success for Tim Burton. With a budget of $15 million dollars, he was able to turn Michael McDowell and Warren Skaaren's story about a crazy and devious "bio-exorcist" into an instant hit and making over $73 million dollars. For many people, Beetlejuice was the movie that put Tim Burton on the map. So, when you have a huge hit such as Beetlejuice or any other movie in the 80's, what's next? Why, make it into an animated series, of course! So on September 9, 1989, three months after the release of Batman, Tim Burton created, developed, and executive produced an animated series simply known as Beetlejuice.

The show is about a goth girl named Lydia Deetz who is a bit abnormal among the real world. She goes to an all girls' school called Miss Shannon's School for Girls where she is seen as odd and eccentric compared to the other girls. Afterwards, she goes to her room and says a chant that ends with her saying "Beetlejuice" three times and she ends up calling him and entering into the Netherworld. Beetlejuice is portrayed as a crazy, eccentric, over-the-top conman who is hated by everyone in the Netherworld, except Lydia and his neighbors. His neighbors consist of Ginger, a sweet, kind, tap-dancing spider, Jacques LaLean, a French skeleton, and The Monster Across the Street, a tall hairy monster who dislikes Beetlejuice, but likes and respects Lydia. In each episode, Beetlejuice and Lydia travel around the Netherworld seeing all the crazy, spooky creatures that live there. Also Beetlejuice ends up getting into trouble whether he's trying to scam a monster or does something crazy to make money and Lydia scolds him for being manipulating. However, Beetlejuice and Lydia continue to be the best of friends. 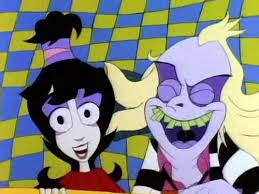 So yeah, if you were a huge fan of the movie, you can plainly see that the series has almost little to nothing compared to the movie. First of all, in the movie, Beetlejuice was the antagonist of the series and only knew Lydia because he wanted to forcefully marry her to have the ability to cause chaos in the real world. In the cartoon, Beetlejuice and Lydia are best friends. In the cartoon, there are no mentions of Adam and Barbera Maitland, Otho, Juno, or The Handbook for the Recently Deceased, the book that was Lydia used to communicate with the dead in the first place. Also Lydia's parents have no idea about Beetlejuice or the Netherworld, while in the movie they do know about it. Beetlejuice is portrayed as a goofier, more joking con artist in the cartoon compared to the movie. He was toned down due to the cartoon being for kids.

Also the cartoon focuses its humor on gags and movie/TV references as oppose to the movie which had a touch of dark comedy. The Netherworld looks completely different as well. We don't even see the afterlife office and the desert where the sandworms are has been expanded. Also, every town and section of the Netherworld contains different terrains of land that is oddly drawn and animated. 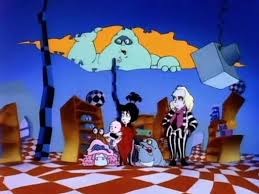 However, just because it's almost nothing like the movie, it doesn't mean you shouldn't watch it. It's actually a pretty good animated series on its own. I mean, sure it's not like The Real Ghostbusters in which it continues the story from Ghostbusters seeing our heroes fight more ghosts, Beetlejuice contains some really unique and creative aspecs that make it stand on its own. First and foremost, the opening song to the show is awesome! It's truly one of my favorite openings to any cartoon ever. Danny Elfman, who did the music for the movie, did the music for the animated series and it's captures perfectly the strangeness of the show. Also, Tim Burton did the designs of the characters and the Netherworld which are strange, odd, and creepy at the same time. It has his style written all over it. Not to mention some of the jokes and gags can be pretty funny. The jokes are really clever and can ride over kids' heads when seeing it. It was only when I was older when I understood what they meant. 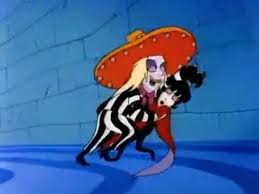 The show lasted for 4 seasons ending its run on May 7, 1992. Overall, if you were a fan of the movie and you skipped on the cartoon, give it a chance. While the cartoon has no connections to the movie, it does have enough original ideas and quirkiness to stand out on its own. A lot of people were introduced to the Beetlejuice cartoon first and had built an interest of seeing the movie. At least Tim Burton was responsible for having the ability to do a cartoon based on his movie. Trust me, it could've been worse. It could've been a crappy movie based cartoon in which it has none of the charm from the source material.

I would recommend checking this cartoon out. It's one of the best animated series based on a movie. 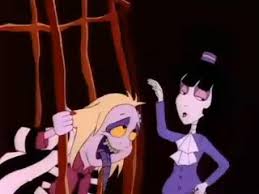 That's all for now. Tune in next time as head over to Gotham City with Batman. 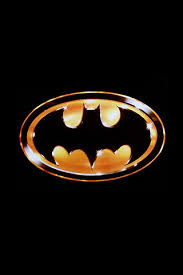