Happy first night of Hanukkah, everyone! What better way to celebrate this Jewish holiday than with a Nickelodeon Hanukkah special! When it comes to holiday specials on Nickelodeon, most of them are Christmas. We'll talk about Christmas another time. As far to my knowledge there are two Hanukkah specials on Nickelodeon, one that everyone knows about and one that nobody remembers. Today we're going to talk about the latter. That special is The Weinerville Hanukkah Special.

Released in Nickelodeon on December 14, 1995, it was the very first Hanukkah special to be shown on this network. Since Marc Weiner is Jewish, it makes sense that he would do a Hanukkah special. So does this Hanukkah special burn bright after 17 years later or has the lights burned out a long time ago? This is The Weinerville Chanukah Special.

We start off with Marc Summers telling a brief story about how the holiday first came to be. Then Boney comes along telling the story of Weinerville's Hanukkah story. We then shift off to the main story: It starts in outer space where potato latke aliens are being harrased by other aliens to be just like them. They stand up to them, but the leader named Dorkus, tell them that they'll be back. 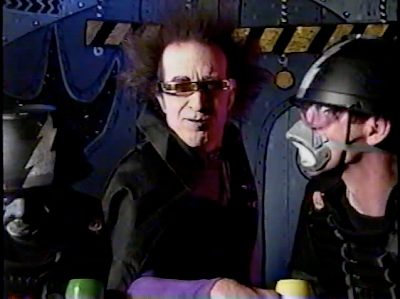 Dottie lets Boney know about a big party happening at the Weinerville Ski Lodge. Boney gets excited as he and Socko head over to the Ski Lodge. All of a sudden, the potato latke aliens run out of oil, so they land on Earth to get some more. All of a sudden, Dorkus lands on Earth and threatens Dottie to tell her where a wise man named the Gonsah Knocker is, otherwise he'll ruin the party with his powerful remote. Meanwhile the potato latke aliens look for the Gonsah Knocker to get some knowledge and courage to defend themselves against the evil alien leader. He then explains that their problems are similar to what Jeremiah and his people went through thousands of years ago and the origins of Hanukkah in song thanks to Cocktail Frank, Socko, and Boney.

After that, Dorkus makes his way to the location of the Gonsah Knocker and Socko and Boney devise a plan to steal his remote. Socko drives his snowmobile and grabs the remote, Boney pours oil on the floor to make them slip, Zip controls a giant dreidel and knocks them over, and the potato latke aliens help defeat the minions. Eventually Dorkus captures Socko and the remote and claims his victory, but Boney tells him that he forgot one thing: he got snow on the floor of the lodge which wasn't allowed. The clean up guy beats him up and the potato latke aliens capture everyone and bring them to their mothership to send them to jail. With that, their freedom is secure and they give a big thanks to Socko, Boney, Zip, and Pops.

After they leave, Marc Weiner and the rest of the guests arrive at the lodge to set up for the party. Then afterwards, the special concludes with Cocktail Frank and the Weenies singing the song "Menorah Menorah" and everyone wishes the audience a Happy Hanukkah.

Overall, I have to say that The Weinerville Chanukah Special is one of the weirdest holiday specials I've ever seen in my life. I would even go far as to say it's even weirder than Pee-wee's Playhouse Christmas Special. Yeah, I said it. I never thought in a million years that a Hanukkah special would contain aliens, slapstick humor, musical numbers, puppets, and corny jokes, I kinda enjoyed it. It's Weinerville-style humor at its weirdest, but it's a lot of fun. If you're a Weinerville fan or in the mood for a strange Hanukkah special that isn't from Adam Sandler, check it out. If this doesn't sound like your think, then skip it. You have to be in the right mood to appreciate this special.

That's all for now. I'll be back for the last day of Hanukkah to talk about the Hanukkah special that everyone remembers fondly: The Rugrats Hanukkah Special.