Happy Kwanzaa, everyone! Time to celebrate this holiday of remembering the legacy of the African American people with Nickelodeon’s: A Rugrats Kwanzaa. Debuting in 2001, it still stands as the only Kwanzaa special that Nickelodeon ever aired. So is this special as memorable and classic as the Rugrats Christmas and Hanukkah specials or is this holiday too obscure for the babies to understand? This is A Rugrats Kwanzaa.

We start this special on a rainy night at the Carmichael’s house where Susie wants someone to play with. However her older sister Alisa is on the phone and her older brothers Edwin and Buster are busy doing different activities. Suddenly their Great Aunt T to come visit them for the holidays. The kids are a little concerned since they don’t know who she is, especially Susie. She then begins to tell them about Kwanzaa, but the kids don’t know about it. So she decides that the kids deserve to know about the holiday since it’s a celebration of the legacy of their ancestors. 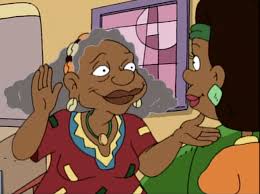 Afterwards, Great Aunt T gives them Kwanzaa gifts: Alisa gets an African hat, Buster gets an African beaded necklace, Edwin gets an African tribal mask, and Susie gets an old photo album. Susie doesn’t feel special compared to the rest of her family. Tommy and the rest of the babies visit Susie and she begins to explain about Kwanzaa to them and tells the babies about her problem. Tommy tells her that Susie is special no matter what, but Susie isn’t convinced. She tries everything that her brothers and sister does, but it doesn’t work. She tries creating a vase out of clay for Great Aunt T, but it fell and looks like a blobby cup.

She runs to her parents room and starts crying. Great Aunt T sees her and cheers her up saying that she’s still too young to try to pursue things like science and soccer and that she’s special in her own way. Then the power goes out and Great Aunt T decides to borrow Susie’s album and tell stories. 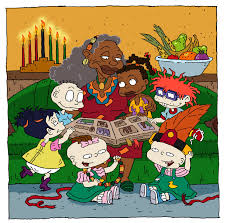 One story involves with her and her husband Charles driving fast to reach Washington D.C. to hear Dr. Martin Luther King’s speech. Charles sees a man struggling to get his car fixed and he stops to help him. That man turned out to be Dr. King himself. The next story involves with Lucy, Susie's mom, as a little girl being nervous singing in the choir. The final story involves with Lucy as a young adult crying that she doesn't have enough money to go to medical school. Great Aunt T gives her a check with enough money for her schooling. The special concludes with the lights turning back on and feasting on peanut butter sandwiches and Susie making the Kwanzaa speech.

Overall, this special was a tad bit forgettable and the weakest in the holiday specials that Rugrats has aired. It didn't have the same charm that the Rugrats Christmas and Hanukkah specials had. At least with the Hanukkah and Passover specials, they explained the origins of the holidays well enough for a kid to understand. This special didn't explained Kwanzaa well enough or long enough for a kid to grasp. That's a shame too because the Carmichael family aren't shown enough in Rugrats and it would have been nice if they had reenacted the Kwanzaa origin Rugrats style. I could have easily seen Edwin portraying as Maulana Karenga. I don't recommend checking it out.

If you want to see a good animated Kwanzaa special, check out The Proud Family Kwanzaa special. It's funny and explains the meaning of Kwanzaa much better. 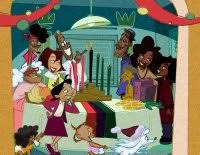 That's all for now. Tune in next time as we look into a forgotten Christmas special called Christmas in Tattertown. 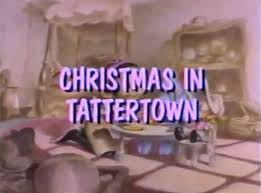