12. Son of Stimpy from The Ren & Stimpy Show

Yeah, this is surprisingly a Christmas special and it's one of the most memorable episodes that aired in the series. Stimpy let out a huge fart, which he believes that he had given birth to his son Stinky. He tries to find Stinky before the Christmas holidays. Yeah, that sounds as stupid and disgusting as you think it is, but come on. This is Ren and Stimpy. What did you expect? It's surprisingly heartwarming when Stinky tells Stimpy that he's an adult now and that he must move on with his life and Stimpy gives him his approval. It also has one of the most controversial scenes in any animated show ever: Stimpy being lured by Ren to come under the mistletoe. Nonetheless, if you're in the mood for a more unorthodox Christmas special, this is the one for you.

In this episode of Kenan & Kel, it's almost Christmas and Kenan wants a brand new bike. He is told that he has to pay for it with his own money so Kenan decides to work as a mall Santa while Kel is his elf. At first, he's doesn't care about what the kids want. He just wants a bike. But then he sees a mother with very little money take their kids in to see Santa. She knows that the kids aren't going to get anything for Christmas, but she still lets them see Santa so that the Christmas joy could still be in their hearts. In the end, Kenan realizes what Christmas is all about and it has a very nice ending. It's predictable and cheesy, I know. But that's excusable for Christmas. Give it a watch.

10. All That/You Can't Do That on Television Christmas Special

Ah yes, both of these sketch comedy shows had Christmas specials and they're both really funny. All That's Christmas special has the usual classic skits, but having a Christmas theme. Same things going for the You Can't Do That on Television Christmas special. In that special, they have the Christmas skits as well, but Alastair is constantly walking around in a helmet with a mistletoe hanging down and two big puckered lips ready to work. These specials came out when both of the shows were in their prime and it was nice to see them have funny skits celebrating the best time of the year.

9. O Christmas Pete from The Adventures of Pete & Pete 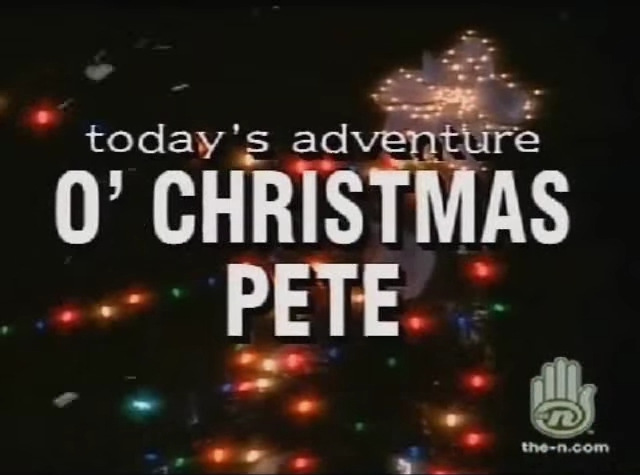 Little Pete and his friends try to have Christmas every day, but unfortunately doesn't go very well when his neighbors, Pit Stain, and the garbage man try to prevent it. The garbage man is the most memorable in this episode; he's gathering all the Christmas trees around the neighborhood and shredding them indicating that Christmas is officially over. Little Pete and his friends work together to stop them from getting what they want: Christmas happening every day. Does this premise sound familiar? Well, if it sounds like the plot to Snow Day, it basically is. This episode was the inspiration for Snow Day after Will McRobb and Chris Viscardi closed the idea of having a Pete & Pete movie. While this special has the Pete & Pete charm in it, I can't help but look at this special and think of that awful movie. Which is why it's on #9.

8. Christmas Everyday from The Fairly Oddparents

It's Christmas and Timmy is so happy with him being with his parents, not going to school, getting lots of presents, the snow, and Vicky not being around. He loves it so much that he sings about wanting everyday to be Christmas. Cosmo and Wanda grant him that wish and at first, everything is going great. But then two weeks past and everyone is getting sick of it. Timmy tries to wish Christmas to be once a year, but Cosmo and Wanda transfered their powers to Santa so he could make toys for all the boys and girls. But then things get worse when the other holiday mascots try to get rid of Santa and have their holidays more well known. Timmy then learns that while Christmas is a great holiday, it can only be celebrated once a year and that's a nice lesson.

7. The Most Horrible X-Mas Ever from Invader Zim 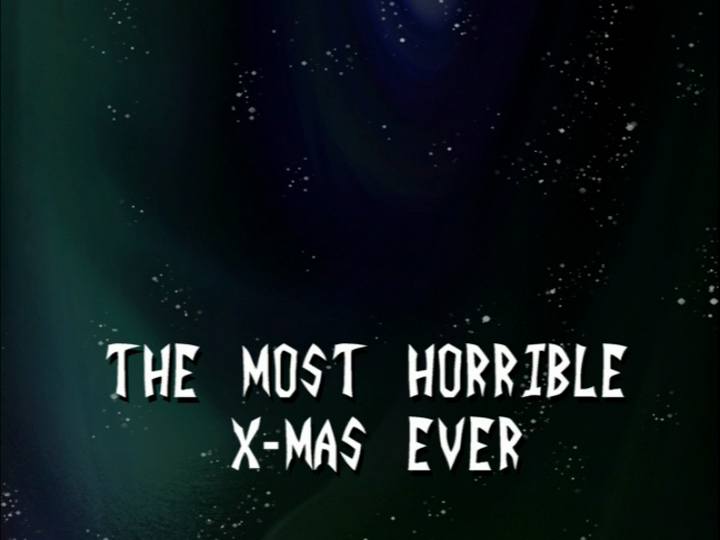 One of the last episodes of the entire series is certainly one of the most surreal. 2 million years into the future, a robotic snowman tells the story of the worst Christmas ever. Zim is trying to get money, but sees that everyone is giving it to the Santas in the street. Zim tries to find out who he is and why everyone loves him. Then he kidnaps one of the Santas, drains his brain with all of his knowledge, and Zim decides to disguise himself as Santa. The world loves him and embraces him as ruler of the world and Zim decides to use the humans to build a teleporter between Earth and the Irkin ship. Dib realizes that Zim is Santa so he tries to stop him. This episode is so strange and funny at the same time. In the end, it shows Santa Claus being a giant monster trying to destroy the world. 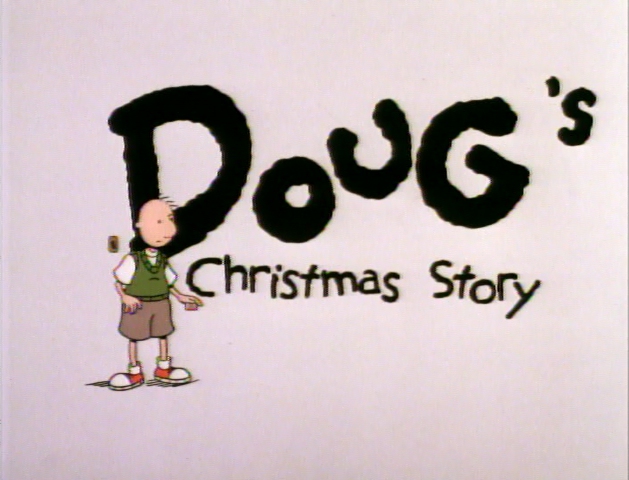 It's almost Christmas time in Bluffington and everyone is getting ready for it. While going iceskating with his friends, Doug sees Porkchop biting Beebe's leg. Porkchop was trying to prevent Beebe from going into the thin ice, but his actions made it look like he was attacking her. So Porkchop is arrested and put into a dog pound. Doug is depressed that his best friend is locked up so he tries to set him free. He goes into court and convinces the town that Porkchop is innocent. It gets really depressing throughout this episode, but it gets really happy in the end.

5. Robot for All Seasons from My Life as a Teenage Robot

This Christmas special is surprisingly dark. Jenny helps out a poor little boy named Todd Sweeney. But Todd isn't who he portrays himself to be: he's a mean, evil, spoiled little boy who programs Jenny to become evil for an entire year destroying all the holidays. When Jenny finally wakes up, she sees her town and her friends afraid of her. Jenny tries to tell them that she's not evil, but they don't listen to her. It's the Christmas holidays and Todd tries to program Jenny to destroy it, but Jenny fights off to save the most sacred holiday of all. In the end, everything's nice again and they even have a Christmas song. It's actually very funny when Jenny tries to question the people on how they know this song when they never sung it. That's Christmas for you.

4. The Santa Experience from Rugrats 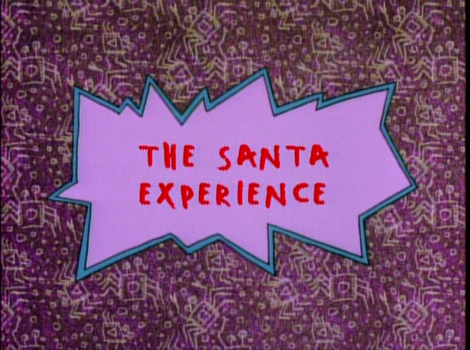 Rugrats has had two Christmas specials: "The Santa Experience" and "Babies in Toyland", but I prefer this one. It starts with Angelica going over to the mall and asking Santa what she wants for Christmas. But then she realizes that he's not the real Santa and calls him a fake. The employees from the mall bribe her by giving her every toy in the entire mall. But she still wants the present she really wants, a Deluxe Cynthia Beach House. Meanwhile Chuckie is afraid of Santa and doesn't want him to come. Tommy tries to cheer him up, but in the end, the entire baby group is afraid of him. Angelica then learns about that her mean actions might end up with her getting coal for Christmas so she tries hard to be nice so she can get her gift. This special is a classic and I watch it every year.

3. Christmas Who? from SpongeBob SquarePants 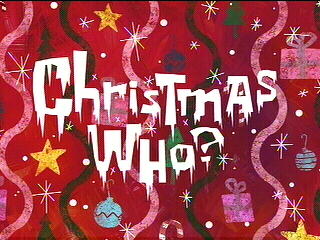 As of this year, there are two SpongeBob Christmas specials and both of them are very unique, but the original is on this list. Sandy is getting ready for Christmas, but everyone in Bikini Bottom has never heard of Christmas. So she tells SpongeBob about it and he tells everyone else. They all get excited, but Squidward thinks that it's impossible for Santa to come underwater to give presents. Everyone is disappointed when Santa doesn't show up and SpongeBob is very upset, so Squidward disguises himself as Santa. This is a very unique and creative idea during the time when the show was in its prime. It's the most played out special that Nickelodeon has ever done.

2. An Even Steven Holiday Special from As Told by Ginger 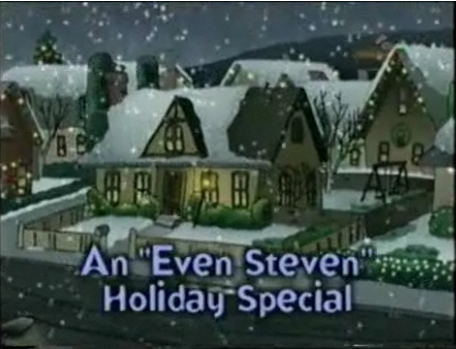 I've already talked about it in my Top 10 As Told by Ginger episodes, so I won't go into full detail. Ginger wants to celebrate Christmas in a more special way. Lois tells Ginger about her Jewish grandfather so she decides to combine Christmas and Hanukkah into one party. Meanwhile Hoodsey is making a list of what he wants for Christmas and Carl tells him that Santa doesn't exist. His reasoning behind it is because when he was a kid, he asked Santa for his father to come home but it didn't happen. This is a very nice special that has a lot of heart in it. 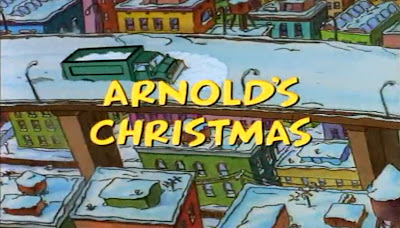 I know. Predictable, I know. But I couldn't help it. I tried my very best to not include it since I already included "Arnold's Thanksgiving" in my Top 5 Thanksgiving Specials, but I couldn't. This special has so much heart, love, and that good ol' Christmas spirit. Arnold finds out that Mr. Hyunh is his secret Santa and he wants to give him something special. Mr. Hyunh tells Arnold about the story about how he gave his daughter away to American soldiers during the Vietnam War and was trying to find her ever since. All he wants for Christmas is to see his daughter again. Arnold and Gerald talk to the city archivst Mr. Bailey, but he's too busy with Christmas shopping. Arnold tells him that he'll do the shopping in exchange for looking for Mr. Hyunh's daughter. Meanwhile Helga wants to have a pair of snow boots for Christmas. In the end, she does. Arnold and Gerald are looking for those same snow boots, but they're all sold out. Helga finds out about this and gives her snow boots to Mr. Bailey so Arnold can have a nice Christmas. Kevin and I have this episode in our Top 10Hey Arnold episodes and there's a reason why. It's so touching and sincere. The ending always gets me a little teary-eyed when I see it.

Tune in tomorrow as we celebrate Kwanzaa with A Rugrats Kwanzaa. 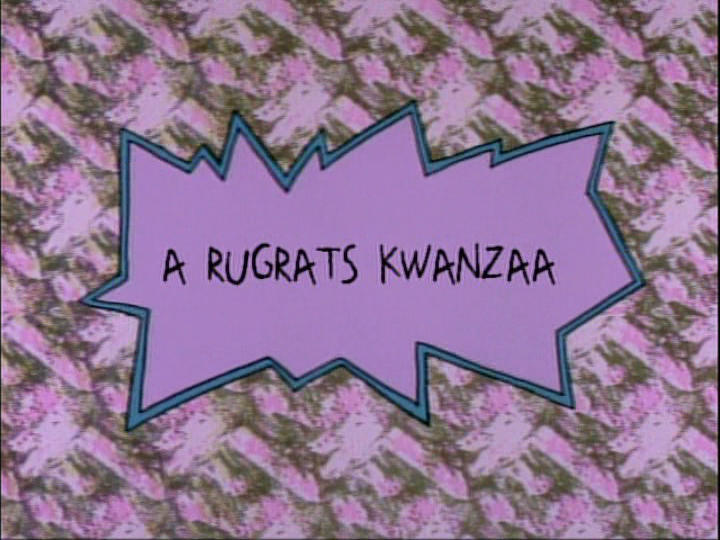 This ought to be interesting. Hope to see you around Old School Lane soon. Merry Christmas!