It's the year 1977. An ambitious young man named George Lucas created a movie called Star Wars taking place long ago in a galaxy far, far away. A brand new show based on sketch comedy called Saturday Night Live premiered on TV. Alex Haley's book based on his family legacy called Roots was televised and became one of the most viewed TV miniseries of that time. The 1970's became one of the most innovated decade for television and movies. For movies, westerns were dead and sci-fi was booming. For TV, they focused on shows for younger audiences and teenagers. It introduced "jiggle television" with shows like Charlie's Angels and Three's Company.

However, there were not a lot of programs for children. Sure it had shows like Captain Kangaroo, Sesame Street, Fat Albert and the Cosby Kids, Mr. Rogers’ Neighborhood, Scooby’s All-Star Laff-a-Lympics, and School House Rock, but there were no networks dedicating only to kids. You have to understand that back then, shows for kids were mostly shown on Saturday mornings. But on December 1st, a brand new TV cable station from Columbus, Ohio would change everything. QUBE, by Warner Cable, created a children’s network exclusively to their subscribers. It was called Pinwheel. The very first TV show that ever aired for this new network was called Pinwheel which debuted on December 1, 1977.

The show was about a group of people interacting with many variations of puppets, similar to Sesame Street. Characters included an elderly couple named Sal and Smitty, who owned a newspaper called The Daily Noodle, Coco, a female mime, Franci, an artist/storyteller, Jake, who owned many boxes filled with goofy sound effects, and Kim, the next door neighbor. The puppets included Plus and Minus, two kids who were eager and curious about everything, Ebenezer, a green grouchy monster who loved weeds and wishes to have a front page article on The Daily Noodle, Silas, a snail who is known for being really slow, Herbert and Lulu, two sibling bumblebees who stick close together, and many more.

Similar to Sesame Street, the show offered many variations of cartoons and claymation segments. A noteworthy thing to mention is that they came from various countries, mostly Canada. Since this was a brand new network, they didn’t have their own animators yet to make their own exclusive cartoons. That wouldn’t happen until much later. A few to mention are Chapi Chapo, a French stopmotion cartoon about two siblings with big hats, Hattytown Tales, a Canadian cartoon about a town made of hats, Paddington Bear, a bear from Darkest Peru living with the Brown family in England, Timmothy the Thinker, a boy who thinks, Simon in The Land of Chalk Drawings, a Canadian cartoon about a boy named Simon who enters into a chalk world interacting with chalk drawings along with his friend Henry, and a segment in which a girl is interacting with building blocks that build themselves.

Another one to mention is Picture Pages, in which Bill Cosby would teach kids about math, geometry, and drawing simple pictures. Originally done by Captain Kangaroo in 1978 with his magic drawing board, it was soon replaced by Cosby a few years later. When Captain Kangaroo was cancelled in 1984, Picture Pages was adopted into Pinwheel. Think of it likeJoy of Painting by Bob Ross, except for pre-schoolers.

Pinwheel would run for 5 hours starting at 8:00 a.m. and ending it at 1:00 p.m. 5 days a week. At the time, it was the longest running show that Nickelodeon ever aired with a total of 260 episodes. Today, it’s #5 on that list. The popularity of Pinwheel skyrocketed. They would even travel to many states having live shows for children. The show lasted for over 10 years, ending its run in 1989.

Overall, after 35 years later, does Pinwheel still hold up? Well, to be honest, no. Sure, it was a great show at the time, in fact, for any true old school Nickelodeon fan, they would say that this is one of the shows they remember from their childhoods. But it hasn’t aged well at all. Some of the key factors to any kids’ shows are lovable and memorable characters, great segments, and nice looking scenery. Pinwheel fails at most of these factors. The human characters and puppets are bland and forgettable, with the exception of Coco the mime who scared Kevin to death when he was a kid. Pinwheel was a very low-budget kids’ show and it definitely shows. The puppets Silas, Lulu, and Herbert had thick strings surrounding them, the mouths would sometimes not sync with the voice, and the eyes would sometimes not blink properly. Also, the cartoons that involved with narrative storytelling does tend to drag after a few minutes. Kids today will not have the patience to sit down and listen to an old fashioned storytelling cartoon like the ones shown on Pinwheel. The narrators have no emotion in their storytelling; it’s monotonous, low, and boring. I even fell asleep a few minutes a few times. It was trying to be a Sesame Street clone, but it fell short. 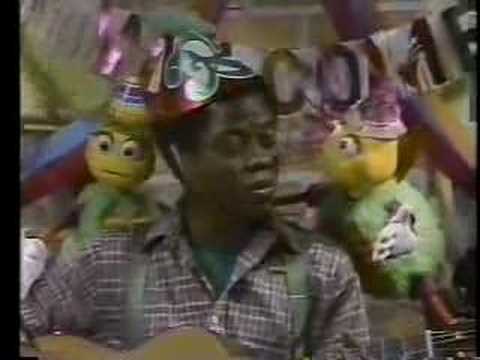 However, that doesn’t mean I hate it. I actually give Pinwheel a lot of credit. Believe it or not, it actually influenced quite a lot for future Nickelodeon shows. One of the people who worked on Pinwheel was Jim Jinkins, who would later for on other shows for Nickelodeon. Picture Pages would be a precursor to another drawing segment of another kids’ show for Nick Jr.

While it may not be the best aged show, I would recommend checking it out to see where Nickelodeon started out. Pinwheel was truly in an important stepping stone for the future #1 kid’s network. Do you have any fond memories of Pinwheel? Post it in the comments and let us know.

Well, that's all for today. Tune in next time as we discuss more about Nickelodeon. Hope to see you around Old School Lane real soon. Thanks for reading.