It's the year 1980. Friday the 13th debuted in theaters and gave reasons for kids to be scared when they were sent to summer camp by their parents. Jason Voorhes would soon be an iconic 80's slasher. One of the funniest spoof movies of all time Airplane was released in theaters. The 70's were gone for good and the 80's was in full swing. A new decade meant new opportunities and new shows for Nickelodeon. A new logo, again designed by Joseph Iozzi, and a new commercial was used for this new era.

One of the shows that was created during 1980 was a brand new TV genre never done before. Conceived by former Monkee member Michael Nesmith, he created a program as a promotional device for Warner Communication's (Warner Music Group) record division. That program was called PopClips. Michael Nesmith was inspired by a New Zealand program called Radio with Pictures which began in 1976. The show would include music clips from popular bands and singers as well as conducting interviews with them. 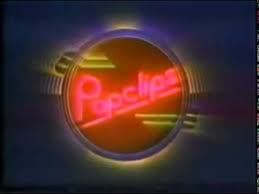 According to an 2001 article by American Decades, John Lack, a marketing executive for Warner Cable Corporation (which owned Nickelodeon and several other pioneer cable channels), the network went after the teenage audience as well since Nickelodeon was first targeting children. Teenagers were traditionally considered "low users" by the television industry, and Lack saw visual rock music as a way to reach that vast, un-tapped audience. Lack commissioned Michael Nesmith and Warner Communication to produce the show. PopClips was going to be fast-paced mixes of videos set to popular songs, animation, and segments featuring a "veejay," the video equivalent of a disc jockey.

Popclips were hosted by Jack Armstrong, Jeff Michalski, and Howie Mandel. The show was directed by William Dear. Some of the music videos that were shown in Popclips were the following:

PopClips would be broadcast weekly and at the time, it was a hit. There was never a show like this and seeing their favorite bands performing their favorite songs was something to behold. Also, it gave them an opportunity to listen to upcoming new bands or singers. They knew that had something special. In 1981, Warner Cable wanted to buy PopClips for William Dear and Michael Nesmith, but they both refused. However, this was the future inevitable doom for PopClips. On 12:01 a.m. at August 1, 1981, a similar idea of a music television show was debuting for the first time in its own channel. Instead of it showing up for 30 minutes every week, this program would be showing music videos 24 hours a day, every day. That infamous program was...MTV!

There was no way that PopClips could ever compete with MTV so they were cancelled in 1981, a year after they debuted. Jeff Michalski, one of the veejays of PopClips, went to be one of the veejays for MTV, Howie Mandel did stand up and did a lot of voiceover work with Jim Henson's Muppet Babies, Gremlins, and Bobby's World. But of course, we all know him as the host of Deal or No Deal and as one of the judges in America's Got Talent. William Dear directed other movies and TV shows like Saturday Night Live, Dinosaurs, Harry and The Hendersons, If Looks Could Kill, Angels in the Outfield, and Michael Nesmith's TV series Television Parts and his groundbreaking comedy and music video, Elephant Parts.

Overall, PopClips was ahead of its time releasing only music videos for the viewing audience and it would become a precursor to one of the most popular channels of the 80's. In a way, without Nickelodeon, there would be no MTV, so it's quite amazing when you think about it. Check it out sometime.

That's all for now. Hope to see you around Old School Lane real soon. Thanks for reading.

-Patricia
Posted by Old School Lane at 11:48 AM