In 1983, Nickelodeon already had a few kids' shows, a talk show, and a sketch comedy show. Now it was time to add something a little bit scary and thrilling for the older kids. So Nickelodeon decided to release a new anthology show known as The Third Eye. 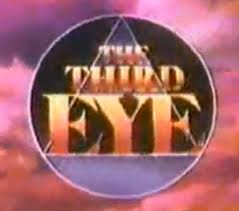 The show consisted of compiling different anthology shows from the U.K. and New Zealand into one show in the U.S. Each episode shows one part of one of the shows. There were four in total.

Into The Labyrinth was a British TV drama from 1982 about three kids named Phil, Terry, and Helen who wander into a cave after hearing someone crying for help. They find an old man named Rothgo trapped in a rock. He claims that he can set him free with the power of magic. They do it successfully by lifting the rock with mind power. Knowing that they had this power inside of them, he reveals to them that he's a sorcerer and needs them to retrieve an item called the Nidus, which is the source of his power. If he doesn't retrive it in time, then his power will fade and he will eventually die. He sends them to a labyrinth which takes them to different time periods to retrieve it from the evil sorceress Belor. Along the way, they meet up with Rothgo's past selves to help find the Nidus.

Into The Labyrinth was created by Bob Baker, a British television and film writer who also wrote a few episodes of Doctor Who and co-written the four Wallace and Gromit movies alongside with creator Nick Park. The show lasted for one season in the U.S. while it continued for two more seasons in the U.K. 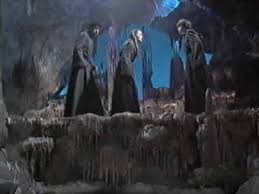 The Haunting of Cassie Palmer was a British TV drama from 1981. Based on the book by Vivien Alcock, the story was about a teenager named Cassie Palmer who lives with her mother, brother, and sister. Cassie's mother is a psychic who commited fraud to a woman saying that she was able to communicate with her dead husband when she really wasn't. When the woman found out about it, she threatened to tell everyone about her being a fake, but Mrs. Palmer begs her not too otherwise she'll be rendered homeless.

Cassie discovers that she will be psychic as well because she's the seventh child of a seventh child. Cassie doesn't wish to be psychic, but her powers slowly come anyway. A mysterious figure named Deverill approaches Cassie and she tries to figure out who he is and why he's following her.

Under The Mountain was a New Zealand TV drama from 1982. Based on a book by Maurice Gee, it involved with twins Rachel and Theo Matheson with telekinetic powers meeting up with a mysterious man named Mr. Jones, who they encountered a few years before. Mr. Jones reveals himself to be an alien whose battling another alien force known as the Wilberforces. The Wilberforces are slug-like aliens that can take on any human form bent on destroying Earth. Mr. Jones ask for the assistance of Rachel and Theo since their powers are the only way to turn them back to their original forms.

Children of the Stones was a British TV drama from 1976. The story is about an astrophyscist named Adam Brake and his son Matthew moving to a small town called Milbury to study a megalithic stone circle. They notice some strange things happening with some of the people of Milbury being too nice and too intelligent. Also they notice having strange powers whenever they hold objects that belong to other people. Adam denies it since he's a scientist and doesn't believe in supernatural forces. Throughout the episode, their powers grow and develop revealing a big secret. There was going to be a 5th program shown on The Third Eye, however, the show ended before it could premiere. The show was The Witches and the Grinnygog. The Witches and the Grinnygog was a British TV drama from 1981. Based on a book by Dorothy Edwards, the show was about a strange statue that turns out missing after an ancient English church is being rebuilt in a new site. The statue is founded by a woman who gives it to her father as a garden gnome. All of a sudden, three strange old women arrive at the town looking for something that they've lost many years ago. The children of the woman and their friends try to put the pieces together of the old women's past finding out they're not who they portray themselves to be. 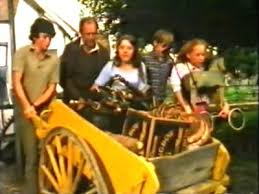 This show scared many children when they first saw it claiming that they had nightmares of it. Yet at the same time, it was still watched and received positively. Overall, many years later, does it hold up? Not really. Back then, it wasn't often that shows from other countries would be shown in the U.S. Sure you had a couple of BBC shows like Doctor Who that were exclusive on PBS, but a British show for kids was something really rare. Kids weren't aware of these British terms as much as we are today thanks to the Wallace and Gromit movies and the Harry Potter franchise. They might get confused hearing words like "lorry", "wanker", "pasties", "torch", and "flat". Also some of the acting from the kids were really awful. Terry from Into The Labyrinth was annoying, all the kids from The Witches and the Grinnygog were forgettable, and some of the kids from Children of the Stones were a bit flat in their performances.

The stories were somewhat fascinating and thrilling. Sure, it's not as scary as it might have been when it first came out, but it did have a bit of a creepy atmosphere and eerie music to fit the theme. I enjoyed pretty much all the stories. They were just enough to keep me wondering what was going to happen next and made me watch more of them. My favorites were Into The Labyrinth and The Witches and the Grinnygog. The acting was a bit hokey and I didn't really care for the children protagonists, but the adult characters and the storylines made it worthwhile to see. Children of the Stones was my least favorite. I found it to be too slow, boring, and weird.

Overall, I thought that acquiring different shows from the U.K. and New Zealand and putting them together as an American anthology show was a bit lazy on Nickelodeon's part. But later on, they would redeem themselves on another more successful anthology show, but that's for another time.

It's a little bit hard to recommend since the shows are outdated and the acting was a bit inconsistent and hokey, and the scares are very tame. But if you can look past that, check it out sometime.

-Patricia
Posted by Old School Lane at 10:58 AM

Email ThisBlogThis!Share to TwitterShare to FacebookShare to Pinterest
Labels: Children of the Stones, Into The Labyrinth, Nickelodeon, old school lane, The Haunting of Cassie Palmer, The Third Eye, The Witches and the Grinnygog, Under The Mountain