Now that Mother's Day is over, it's time to conclude it with a very well known episode pertaining to that subject: the Rugrats Mother Day special.

We start out with Angelica making a macaroni sculpture of her head for her mother in honor of Mother's Day. Tommy, Phil, and Lil never heard of the holiday so they decided to look around for gifts to give to their moms. Meanwhile we see Didi treating her mom Minka to a relaxing day at the spa and Stu trying out a new invention to help Didi with the house chores. However, it doesn't go very well. Didi and Minka have nothing in common and Stu's invention keeps breaking down. Betty tries to help Stu with the invention on how to become a mom.

We then cut back to the babies looking for gifts until Chaz and Chuckie come to visit. He tells Didi about keeping a box hidden that contains with former wife Melinda from Chuckie's eyes since he doesn't want him to feel sad. Chuckie greets his friends and wonders why they're looking for stuff. They explain to Chuckie about Mother's Day, but Chuckie doesn't know about it because he doesn't have a mom. Tommy asks him if he remembers having a mom. Chuckie says no, but he does dream about a nice woman whose mostly takes place outside and she's gardening. Tommy then comes up with the idea of looking for a mom for Chuckie. 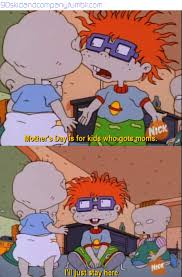 With no luck, Angelica decides to jump in and offers that she can be Chuckie's mom. The babies refuse, but Chuckie accepts. He helps her make the macaroni head and does Angelica's orders while she bosses him around. She even changes his name to Blaine. With a quick misstep, Chuckie accidentally breaks Angelica's macaroni head and as punishment, she locks the babies in the closet and quits being Chuckie's mom. While looking through the closet, Chuckie finds the box containing his mother's things including a picture of her. The adults come home with Charlotte liking Angelica's present, Didi and Minka getting along, and the invention exploding due to a system overload. Chaz comes to pick Chuckie up until he finds out that he found Chuckie found the picture. Chaz, concerned that Chuckie found the picture, decides to take it away. Didi tells him that now is the time to talk to Chuckie about his mom. Chaz finally agrees. 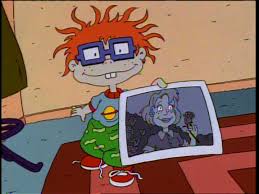 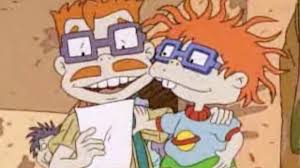 Chaz explains about his mother and the poem she wrote before she died. The poem is about that even though she's not around, she'll always be there for him in the sky, clouds, flowers, grass, sun, and wind. Chuckie then tells Tommy, Phil, and Lil about it and the episode ends there.

Overall, for most people, this is one of the most saddest episodes from their childhood and hold it very dear in their hearts. As for me, I do really like the episode, but it's not as sad as it used it be. When I found out in the interview with Paul Germain that Chuckie's mom was originally alive and the reason why she wasn't in the show was because her and Chaz were divorced, it kind of was a buzzkill. However, there are a lot of good things about it. Firstly, it broadened Chuckie's character a lot more than just a timid, coward baby and it would be the lead up to Rugrats in Paris: The Movie. Overall, it still holds up and you should check it out sometime.