Now we come to the 2000's. While we have been discussing that some of the 90's Nickelodeon shows were hugely innovated and groundbreaking when they first came out, nothing could be more given that recognition than The Ren & Stimpy Show. Back in the 80's when cartoons were either based on a toy, movie, or reboot of a cartoon from the 60's, The Ren & Stimpy Show was an homage to the classic cartoons while giving it a zany twist. The animation was eye-popping and in-your-face, the humor was off color, the jokes had a edge that both kids and adults could enjoy, and the characters were very kooky and over-the-top, but memorable and charming. The Ren & Stimpy Show was a huge game changer for animation in general and many shows from the 90's would copy its formula such as Cow and Chicken, Rocko's Modern Life, and SpongeBob SquarePants. Like it or not, The Ren & Stimpy Show was very ahead of its time and still garnered a huge amount of fans to this day. 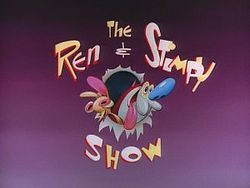 During the 2nd season of the show, Ren & Stimpy creator John Kricfalusi was fired from Nickelodeon and the show took a slightly different town throughout the rest of the show. In 1996, Ren & Stimpy was finally cancelled from Nickelodeon, but the impact that the show left would not go away. For years, many fans were petitioning on renewing the show, but no such luck. John K. would go on to animate Flash shorts cartoon series such as The Goddamn George Liquor Show, Weekend Pussy Hunt, The Ripping Friends, and even a Ranger Smith short on Cartoon Network. But they didn't come close to been as successful as Ren & Stimpy. Around 2001, Ren & Stimpy aired on VH1 in a block called Ren & Stimpy Rocks and brought in huge ratings and big fanfare to the teens who grew up with it as kids as well as a new generation of viewers. This got the new network Spike TV interested in bringing in a new Ren & Stimpy Show for a more adult audience. John K. accepted and on June 26, 2003, Ren & Stimpy: Adult Party Cartoon debuted.

Some of the episodes that was originally going to air on Nickelodeon aired on Adult Party Cartoon and a good number of the people who worked on the original show came back except Billy West. Similar to Brand Spankin' New Doug, West felt that the show wasn't as funny as the original and refused to voice Stimpy. Although West didn't bash the show as much as Disney's version of Doug, he still to this day says that the revival sucks. Instead they hired newcomer voice actor Eric Bauza as Stimpy. Once again, just like Doug and Roger on Brand Spankin' New Doug, while Bauza does a decent job as Stimpy, it's not the same and West has that talent that only he can do. Kricfalusi returns as voicing Ren and it is somewhat awful. It seems that Ren's voice changed from a impression of Peter Lorre to a person trying to impersonate Peter Lorre. It doesn't sound the same as the original and kind of disconnected me from watching it. 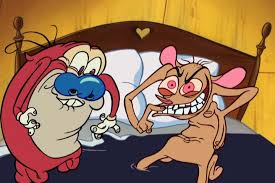 But the one thing that a lot of people noticed when seeing the revival was the tone and humor. If you thought that the original Ren & Stimpy was gross and vulgar, Adult Party Cartoon cranks that up by 11. It's way too vulgar and crude for its own good and tries way too hard to cater to its audience. For a lot of people, they felt the same way and the show was quickly cancelled two months after its debut on August 21, 2003. There were some moments in which I felt that Adult Party Cartoon was having crude moments just for the sake of having crude moments. The original show, while it did have its disgusting moments, had a quirky charm to it with the commercials of selling cereal made of grass, logs as toys, and powdered toast made it seem like a 1950's interstitial brought in the 90's. It had a timeless charm that anyone could appreciate with the characters going through various adventures and funny scenarios that were classic in its own right. Adult Party Cartoon does not and to many people, it's one of the worst animated shows of all time. As for me, it's hugely disappointing and a lost potential to bringing a classic show for a new generation. I don't recommend checking it out.

Tune in next time as we conclude the not-Nickelodeon tribute week with a Cartoon Network show that had a pilot short on Nicktoons Network, but was rejected to being a series. None other than Adventure Time! 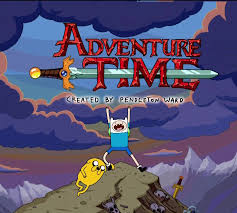